Couples Therapy: “Company,” at the Black Box Theatre through October 16 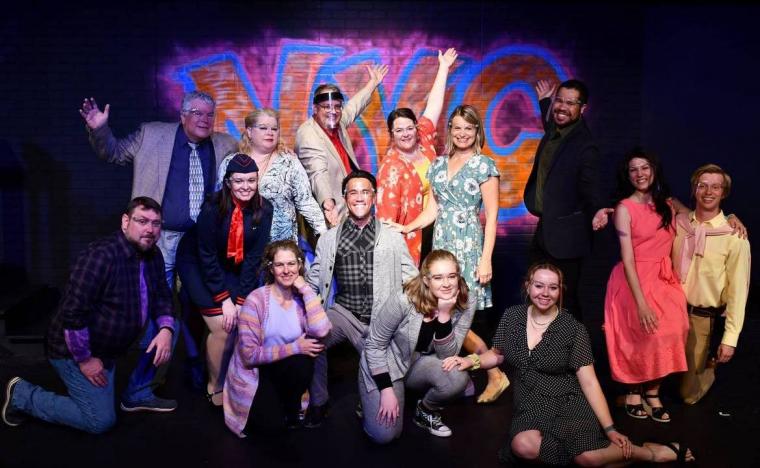 Company, with its music and lyrics by Stephen Sondheim and book by George Furth, won six Tony Awards. It's also 51 years old. (Pausing for groans of despair about fleeting time.) The Black Box Theatre's presentation of the show opened Thursday to a nearly full house, and the stage was also nearly full. Having just enjoyed a summer refreshingly filled with small-cast productions, I've rarely seen more than a handful of folks gathered together onstage this year. Yet somehow, director, lighting and set designer, and venue co-founder David M. Miller – along with choreographer Beth Marsoun – accommodated 14 people on that compact playing area without anyone looking constricted.

Admittedly, it's hard for me to sympathize with Company's protagonist Bobby (played by the talented and versatile Tommy Ratkiewicz-Stierwalt). He lives comfortably; money troubles don't touch him or his circle of 10 friends – five couples who literally sing his praises, continually invite him to dinner, and throw him a birthday bash. (Sure, they're sometimes intrusive and annoying, but what are friends for?) Also, Bobby has at least three girlfriends. One of the musical's songs is titled "Poor Baby." Poor baby? Given that he has all that? Really?! (Bobby's birthday bash is in celebration of his 35th. So. Old.)

Bobby is apparently impoverished only because he's unmarried, and the characters examine the institution from several angles. Two of my favorite numbers are near the top of Act I. "The Little Things You Do Together," which is something of a twisted, facetious commercial jingle, is carried out marvelously by all the couples, and showcases Wendy Czekalski as Joanne. This number is followed by the tender "Sorry-Grateful" with Harry (Joe Urbaitis), David (Brant Peitersen), and Larry (Mark Ruebling), and the song's lyrics and the actors' introspective, quiet performances had me near tears. But they can definitely play funny, too. At one point, something drops directly into Harry's lap, landing a little off-target, and Urbaitis winced so convincingly that I couldn't tell whether his reaction was rehearsed, improvised, or genuine. 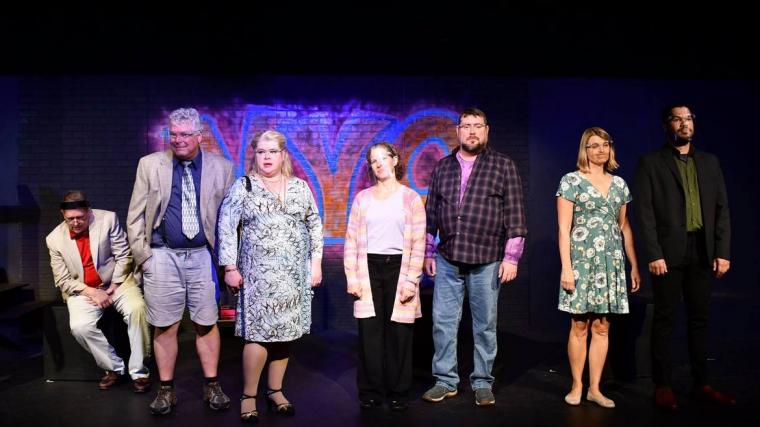 Emmalee Hilburn, as Harry's spouse Sarah, is supremely entertaining when needling her husband. Jacqueline Isaacson and Daniel Williams are appealing as the chipper yet unconventional couple Susan and Peter. The droll Jennifer Cook, meanwhile, plays David's wife Jenny, and in one scene, the spouses invite Bobby over for what was probably a deliciously sordid pastime to 1970s theatregoers: smoking a little grass. Ratkiewicz-Stierwalt attains the perfect level of quiet, grinning stonage for Bobby, while Cook's Jenny insists she's not high, gradually revealing that yes, she is. As for Peitersen's David, he perches on a large, tuffet-esque item that's probably representing a beanbag chair, which was in vogue in the 1970s. (I presume that having actual beans onstage would have been too loud.) "Trying to get out of a beanbag while high" sounds like an acting exercise, and a license to employ wacky comedy. But Peitersen underplays David's efforts masterfully, and all three performers in this sequence demonstrate that acting is indeed reacting, and you don't have to resort to frothing outlandishness to do it.

Czekalski and Ruebling, here playing the married Joanne and Larry, also appeared in the District Theatre's 2012 production of Company, albeit in different roles. Here, Jenny Winn again plays Amy, and having now seen her perform "Getting Married Today" twice, I'll aver that she can out-patter any model of a modern major-general, rapidly jackhammering in 500 words where only about 100 should fit comfortably, and being funny as hell, too. This Sondheim number also finds Michael Alexander, as Amy's fiancé Paul, alternately exuding devotion and devastation subtly and well.

The girlfriends – Abbey Donohoe's April, Abby Bastian's Kathy, and Noel Jean Huntley's Marta – enumerate Bobby's relationship fails in the amusing "You Could Drive a Person Crazy." Donohoe and Bastian light up their brief stage time, and Huntley's performance of "Another Hundred People" is mesmerizing. I'd love to see these three in their own musical. And then, near Company's final curtain, Czekalski bitterly lays into "The Ladies Who Lunch." As expected, she kills it. 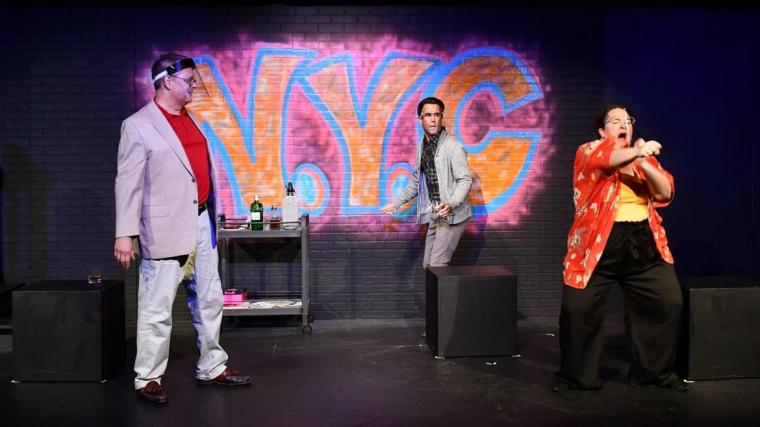 Of the entire ensemble, it's Bobby who comes off as rather bland, which is understandable considering that his friends are all kinds of spicy. He may be a dry bit of toast, but without him, where would all the caviar, cheddar, and peanut butter go? His five pairs of friends seem to know this, as they exuberantly sing "Side by Side by Side/What Would We Do Without You?" complete with the kickline that this über-Broadway song demands.

I'm all-around in awe of these performers' command of Sondheim's musical entanglements. It's gorgeous when their powerful voices come together, weaving those complex melodies and harmonies, and I'm including the four exceptional offstage musicians in my praise. They're led here by music director Randin Letendre, who has done this a lot, and very well.

Though there's nothing inherently wrong with it, Company is not among my favorite musicals. But as I e-mailed my editor upon receiving the reviewing assignment: "I just saw the cast list for Company, and if I'd seen it before, I would have been BEGGING to review it!" I've seen, and admired, most of these performers in other shows, and have even had the pleasure of working with some of them. And yes – these actors and this production team made me love Company. Tickets look to be going fast, so reserve yours now.

Company runs at the Black Box Theatre (1623 Fifth Avenue, Moline IL) through October 16, and more information and tickets are available by calling (563)284-2350 and visiting TheBlackBoxTheatre.com.