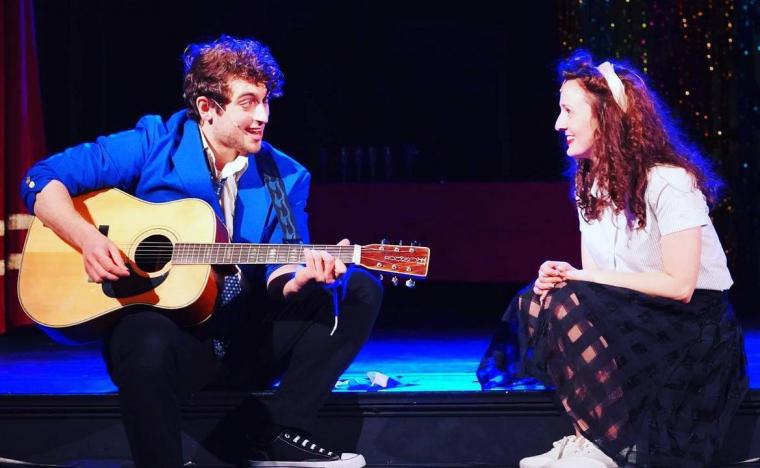 Chase Austin and Amelia Fischer in The Wedding Singer

If you missed the perfectly timed Valentine’s Day opening of the Spotlight Theatre’s The Wedding Singer, don’t have a cow. There’s a second weekend of this righteous romantic-comedy musical if you’re in need of an extra opportunity to show your sweethearts how much you love them. The energetic cast, familiar storyline, and totally awesome music make for the perfect escape from reality back to the '80s for a few hours.

Based on the hit movie starring Adam Sandler and Drew Barrymore, The Wedding Singer follows Robbie (Chase Austin), the singer in a popular New Jersey wedding band, as his relationship ends dramatically and he begins to fall for a waitress who is already engaged. As Robbie navigates his hopes and dreams for the future so he can move out of his grandma's (Kristine Oswald) basement, he discovers everything he really wants. And under Ian Sodawasser’s direction, the Spotlight’s production delivers all the charm of the movie and even brings its own sweet dynamic to the stage.

Austin was an all-around rock star. With great vocals and an endearing personality, his Robbie simply exuded goodness, and Austin had Sunday’s afternoon audience eating out the palm of his hand right from the dynamic opener “It’s Your Wedding Day,” an appreciation that continued throughout the production. While Robbie certainly found himself down in the literal dumpster at times, the actor's performance, as I saw it, was without a weak spot. 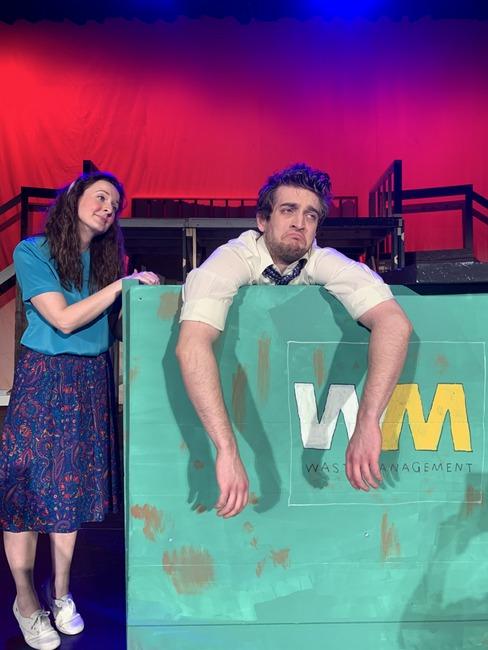 Austin certainly wasn’t lacking in support – Robbie's bandmates and best friends were comprised of Adam Sander’s Sammy and Sethe Christensen’s flamboyant George, and these dudes were totally well-rounded. Further aided by music director Megan Warren and her seven-member pit ensemble that was on stage the entire performance, basically anyone on stage who was in a band, whether fictional or not, was outstanding. Big kudos to whomever at the Spotlight decided to go with live musicians for this production, as they sounded most excellent and paired beautifully with the vocals.

Amelia Fischer was winningly naïve as the waitress, and object of Robbie’s affection, Julia. The highlight of Fischer’s role was her introductory song “Someday When It’s Me,” thanks in part to Joanna Brewer’s outstanding (and hilarious) choreography. Julia is just a nice girl hoping to get engaged, and she has her own sidekick in the form of her crazy cousin Holly (Becca Johnson). When Wall Street jerk Glen (Tim Dominicus) finally pops the question, it’s terribly underwhelming – a perfect setup for the show’s plot.

It’s a shame the romantic villains get so little stage time here, because they were ideal love-to-hate-them types. Dominicus’ annoying Glen was well-matched with Robbie’s ridiculous ex-fiancée Linda, a role that Sara Wegener appeared to take very seriously. Wegener’s commitment to the crazy comedic evil needed to play Linda was fantastic, and the epic volume of her '80s-to-the-max hair just furthered the performer's stage appeal. 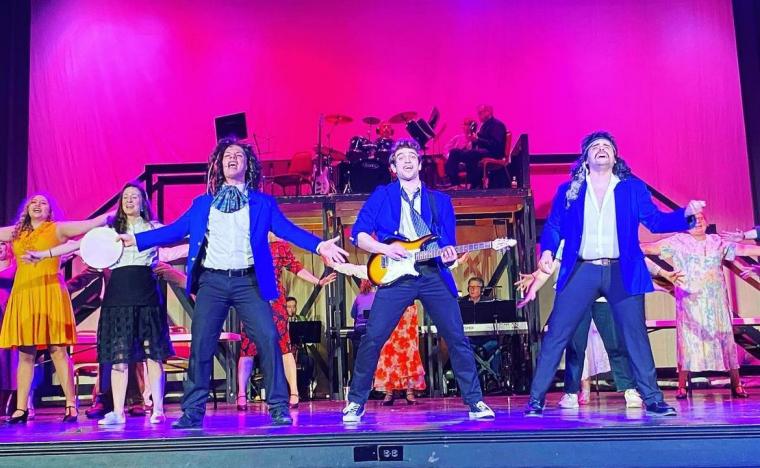 However, Wegner didn’t own all that appeal. While the heart of The Wedding Singer's story follows Robbie and Julia, the will-they/won’t-they sidekicks are interesting enough on their own. Sanders' Sammy, for instance, keeps trying to woo back Holly, and she keeps blowing him off. The whole thing comes to a head in “Right in Front of Your Eyes,” which very well might have been the most well-sung number on Sunday; it dripped with major passion. The sheer talent of Johnson and Sanders, combined with the song's witty lyrics and great choreography, made for an unforgettable few minutes. Johnson’s bio suggests that she will be taking a bit of a hiatus from the stage after this, and that’s reason enough to get a ticket to The Wedding Singer. Watch her go out with a bang, as she's clearly having a ball playing Holly.

Meanwhile, the technical aspects of Spotlight’s production were topnotch, and I especially loved how Brent Tubbs and Jay Whitmore created many different locations with their set designs. Probably the funniest to me was their women’s bathroom. (Were the stall doors a little high for privacy’s sake? Sure, but that made it all the more outrageous.) Zach Chaplain’s lights were bright and flashy: everything you’d expect from the '80s and wedding gigs. And costumer Alexis Lotspeich worked decade-appropriate throwback magic with parachute pants, windbreakers, and puffy-sleeved dresses among her many blast-from-the-past wardrobe choices.

Sodawasser’s production simply excels in bodacious fun. From the huge dance numbers that occasionally escape the stage to the smaller ballads that are nevertheless just as entertaining, no one in this cast of 18 seemed to phone it in at any time, and while the story might be familiar, this telling is something special. From the small, easily missable moments to the larger-than-life hair-dos that refuse to be ignored, the Spotlight Theatre’s take on The Wedding Singer is exactly the sweet treat we all want in this season of love.

The Wedding Singer runs at the Spotlight Theate (1800 Seventh Avenue, Moline) through February 23, and more information and tickets are available by calling (309)912-7647 or visiting TheSpotlightTheatreQC.com.