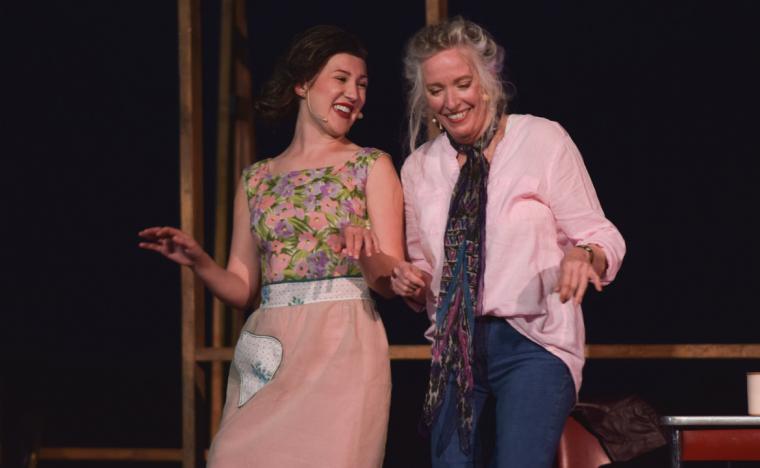 The Clinton Area Showboat Theatre is kicking off its new season with a captivating musical in an exhilarating setting, and although the cast list contains just two people (supported by a six-member band), the production feels expansive – as you'll see.

Always... Patsy Cline, whose author Ted Swindley accurately describes as a "musical play," premiered in 1988 as a production bursting with songs popularized by Cline (as you might expect). Cline was a pioneering and influential singer in the 1950s and early '60s who died in a 1963 plane crash. Here, her songs are sequenced to illuminate one aspect of her life: the inspiration and joy she gave to just one fan. And this character is based on a real woman, whom Ellis Nassour interviewed for his 1981 biography of Cline.

The Showboat's former producing artistic director Matthew Teague Miller directed this one, while Kory Danielson is music director and conductor, also playing piano during the performances. Much thought and work no doubt went into staging this production, but Miller, Danielson, and their crew make it seem like it came together spontaneously and organically.

Kick-starting the show as Patsy Cline, Claire Soulier strides to front-stage center in red and white, flaunting fringe and a cowgirl hat, with a confident smile. Her first number, "Honky Tonk Merry Go Round," captures the fun and flurry (as well as the dizzying ups and downs) of her flourishing career. Becky Saunders plays Louise, an ardent fan of Cline ever since she happened to hear her singing on TV. She tells of getting the thrilling news that the star would be performing nearby. There she approaches Cline, and an instant friendship is born. 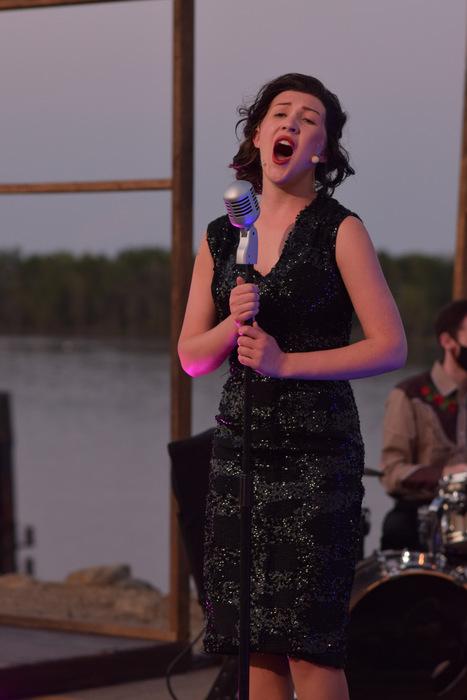 Soulier's dazzling vocal performance evokes Cline with the glissandos, note-bending, and mini-yodels familiar to devotees of the real singer. She illustrates Louise's recollections throughout Always … Patsy Cline with a double-album's worth of songs. You may be as surprised as I was to realize you already know more of Cline's hits than you'd thought – if you're of a certain age, anyway. Her repertoire starts with a solid base of country, and is enhanced with a little gospel, some pop, a touch of early rock and roll, and heavy on the blues. The foot-stompin' songs are great fun, but Soulier portrays Cline accurately as a virtuosa of the blues, and she tells it hard. Even her lively opening number mentions those blues, though Soulier's overall demeanor during the dialogue scenes is consistently upbeat. (Costumer Rebecca Rankin also deserves accolades for Soulier's stunning outfits that were clearly cleverly designed, as the actor has to change by herself on stage, behind a short wall.)

The show doesn't get into the particular real blues of Cline's life, though they are touched upon when she and Louise commiserate about non-specific husband trouble. At one point Louise vehemently exclaims, "Men are pigs!", and this, to me, was a jarring, discordant note. It felt both crude and anachronistic. Was it a quote from the real Louise, a paraphrase by Nassour for his book, or an invention by Swindley? Was it meant to portray secret female bonding of some 60 years ago, when the whole of American society largely ignored pervasive misogyny? Whatever the origin, I wish that line had been cut.

The character of Louise is likable, but something of a caricature; she's a corn-pone regular gal, a cutup full of folksy speech. The real Louise, by all accounts, was well-spoken and elegant. I can understand the playwright's intention to emphasize the gulf between the two women's lives. (Then again, Cline was something of a regular gal herself.) On the other hand, I'd assumed that the tale of the pair's meeting was an exaggeration, or an amalgam of multiple events. It seemed like a too-neat, storybook-ish anecdote. I found out later, however, that it was pretty much what really happened. 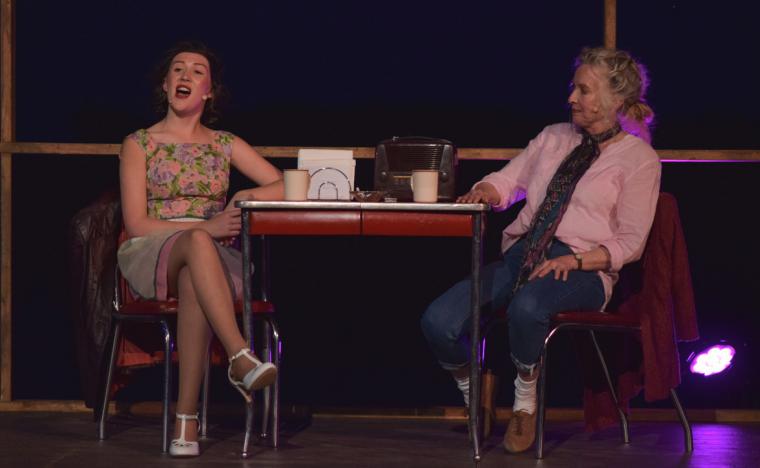 This isn't strictly a two-person show. The band, which remains on stage and masked throughout, becomes part of the action. And both women talk directly to us, so we become Cline's (and Louise's) audience. The humor is mild, except for one pungent expression describing extreme surprise – a bowdlerized version of a real quote. Hoo boy.

Now, about that expansiveness. The setting, a bold, creative accommodation of pandemic guidelines, is a large outdoor stage built in the rear of the Showboat on the Mississippi River. It was 90 degrees the afternoon of opening night, and I was resigned to marinating in sweat and possibly bugs. But we were in the shadow of that big boat, the 8 p.m. showtime brought cooler temps, and a fortunate light breeze made this experience, with the river as a gorgeous backdrop, delightful. (The company will perform some later offerings in the nearby bandshell.) One drawback to that wide stage, however, is a possible stiff neck if you're seated on a side, as I was.

Other contributors to Always … Patsy Cline's larger-than-life atmosphere included all the trappings of a major concert, with fiddle, pedal steel, and piano evoking bygone good times. Plus, both actors have big personalities, big voices, and big talent. I felt like I was witnessing history – or was part of it.