You Know, Dasher and Dancer and Prancer and Barbie … : “Stocking Stuffers,”at the Playcrafters Barn Theatre through November 20 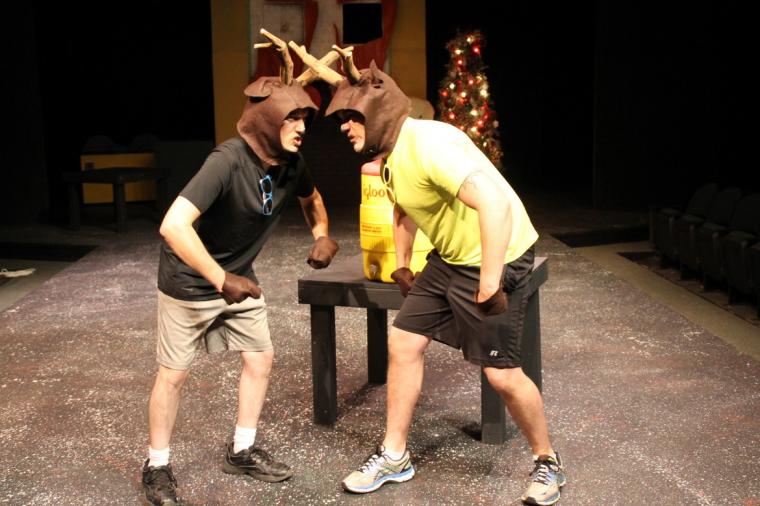 'Tis the season to be … silly?

That certainly seems the case for the Playcrafters Barn Theatre's production of Stocking Stuffers. Chock full of funny characters and Christmas spirit, this show by author Geff Moyers offers everything from hip reindeer to talking stockings – a collection of sketches, with no real storyline, designed to get you in the holiday mood. Director Jacque Cohoon has assembled a very large cast, with only a few actors doubling up on roles, and her show starts with a group of disgruntled holiday figures trying to figure out why Santa Claus – or “The Big Guy,” as they refer to him – gets all of the attention. This upset bunch includes the Easter Bunny (Emily Edens), a Halloween witch (Mandi Wilson), a Thanksgiving Pilgrim (Kevin Keck), and Cupid, who, as played by the young Gage McCalester, actually took great control of the scene with strong projection and his obvious comfort on-stage.

After this opening skit, Stocking Stuffers gives the audience a veritable buffet of holiday-themed treats. We're witness to the elves' break room, G.I. Joe and Barbie getting into an argument about emotional sensitivity, and even two ambulatory stockings (Courtney Babeu and Vickie Underwood) hanging over a fireplace. I have to give a special nod to production staffers Craig Cohoon and Donna Weeks for the set design and costumes, and for the truly inventive way in which they and director Cohoon made those holiday socks come to life.

With a large percentage of the cast being children, some of the production's adorableness was lost at the November 8 preview due to projection problems; I simply couldn't hear a few of the kids. But in one of the cutest moments on Tuesday night, during a particularly funny sequence in which four dolls sprung to life, actresses Ayana Pacley, Ella McConaghy, Chloe Hansen, and Veronika Larson started to crack each other up, and not (I presume) because the script required them to. While this is usually something young performers are taught not to do, in a sweet and goofy show like this one – with one doll laughing so hard that she could barely hardly get her lines out – it just added to the joy and spirit of the evening. Other memorable characters included the reindeer Donner and Blitzen, played by Craig Cohoon and Jordan Smith, whose lengthy, choreographed high-five routine was among the crowd’s favorites. (Smith’s high energy and comedic timing definitely made you take notice whenever he was on stage.) Katherine Cobert and Bryan Cobert, meanwhile, portray Barbie and her high-strung, trigger-happy G.I. Joe, with rival Ken (Austin Winters) eventually showing up and offering the truth behind something we always suspected – Ken wears a wig.

There was also a touching scene between an elf and a Jack-in-the-box (Lena Slininger and Emma Terronez) in which we learn how the latter got his name. He also comes up with new ways to say his name – Jackie, Jacks, Jackster, et cetera – by changing the lyrics to “Here We Go 'Round the Mulberry Bush.” While Stocking Stuffers lacks plot, it does have plenty of this type of holiday cheer that all ages can enjoy. And while the world was changing outside the Barn Theatre during that November 8 preview performance, I'm grateful that I got to forget all about that for a couple of hours, and be reminded of other things – home, children, high spirits – that are truly important.

Stocking Stuffers runs at the Playcrafters Barn Theatre (4950 35th Avenue, Moline) through November 20, and more information and tickets are available by calling (309)762-0330 or visiting Playcrafters.com.