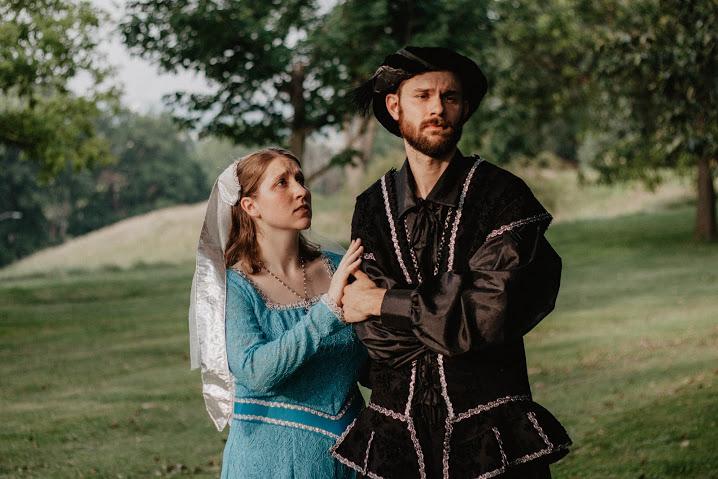 Sure, it’s cliché. But of all the Shakespeare tragedies, Hamlet is my favorite, so I was excited to take in director Alaina Pascarella’s version in Lincoln Park on Saturday night. And Genesius Guild took this classic, trimmed it down, and kept it enjoyable for enthusiastic William Shakespeare fans and newcomers both.

Hamlet begins with Prince Hamlet (Andrew Bruning) returning home to Denmark to discover his uncle Claudius (Philip Dunbridge) has murdered his father and married his mother Gertrude (Cait Bodenbender) in order to become the king. As Hamlet seeks revenge, his apparent madness takes its toll on everyone he comes in contact with, and Bruning was a brooding Hamlet wholly up to the challenge of the many soliloquies for which character is famous. (Even if it’s been years since you last thought of Hamlet, I’ll wager you’re probably familiar with “To be or not to be.”) Dressed all in black by costumer Ellen Dixon, which coordinated well with the title figure's dark outlook on life, Bruning was wonderful. Throughout this production, it was hard to see Hamlet solely as the villain that his stage fellows cast him as – Bruning’s laissez-faire attitude was entirely focused on exacting revenge – because he did so while somehow maintaining an overall charm and wit.

Too bad for Ophelia (Sarah Willie, well-suited for the role), the former recipient of Hamlet’s affections now caught up in a misunderstanding egged on by her brother Laertes (Peyton Brasher) and father Polonius (Aaron Sullivan). This little family threesome’s close relationship was made evident with a kiss on the cheek whenever someone would depart, and that small physical reminder played out several times in both hysterical and heartbreaking ways.

Sullivan made Polonius shine in his basic gray costume, and his reading of one of Hamlet’s love letters was among the absolute funniest moments in this tragedy. Yet Sullivan outdid himself comedically when returning to the stage no longer as Polonius, but as the Gravedigger. (Here, Pascarella wisely employed the Wooten Stage’s pit area to establish the grave being dug.) There was something uniquely poetic in this double-casting choice, for Sullivan to talk to Hamlet from a grave when not an hour prior, Hamlet killed Sullivan’s first character Polonius. Another poetic moment took place at Ophelia’s funeral, when the Ghost (Mischa Hooker) came to collect Ophelia, seemingly leading her into the afterlife.

In truth, Pascarella made several interesting choices with the Ghost, starting with having Hooker wander outside the stage area and through the audience in Lincoln Park at the beginning of the evening. This creative use of space continued throughout the production, lingering even through the last scene, and I relished these more immersive moments when the action was closer to us than ever. Also serving as scenic designer, Pascarella created Hamlet's simple set with two steps and a narrow platform across the back of the stage, and I appreciated the opportunities this provided for actors to sit on an otherwise minimalistic set. (There were two thrones brought in for the king and queen, but it certainly wouldn’t have been appropriate for most to use them.)

This stage set-up also left a particular spot on set that must have been too loose, for no matter who walked across it, his/her footsteps were amplified. This spot almost became another character in the production, proudly announcing the entrances and attitudes of the actors making them, and when Jacob Lund and Kitty Israel scurried in as Rosencrantz and Guildenstern, respectively, the spot made a pattering noise. This was contrasted by Dunbridge’s Claudius, who strode onto the scene with such force and loud bangs he commanded instant respect and acknowledgment from everyone. Dunbridge brought the evening’s only accent to the stage, and whether it was a deliberate directorial choice made to make Claudius seem conceited and overblown or not, it certainly didn’t make the character likable … though Dunbridge certainly was. (I nearly felt bad for Claudius when he was praying with an empty head, but alas, it wasn’t enough for me to overlook the fact that he wanted to be king so badly he murdered his brother and then tried to get rid of Hamlet by sending him back to England to be executed.)

Meanwhile, Payton Brasher not only played three roles, but was in charge of the fight choreography – which, in a single epic throwdown, ranged from swordplay to true Midwestern-style wrestling that even featured proper stances. Brasher’s Laertes found himself battling Hamlet in what turned out to be a pretty dramatic battle that left only a heartbroken Horatio (Kate Farence) on stage. Farence was fairly stoic throughout much of the evening, clearly conserving her emotion to unleash in the play's final five minutes.

All told, Genesius Guild’s Hamlet was completely gratifying. Was it occasionally hard to hear some of the actors? Sure. But the gist of the material never appeared to be lost on the crowd, so no harm, no foul. There was clearly a method to Pascarella’s madness, considering her production takes this well-known tragedy and turns it into something honest and humorous – a style perfect for appreciating one of the Bard’s greatest plays.