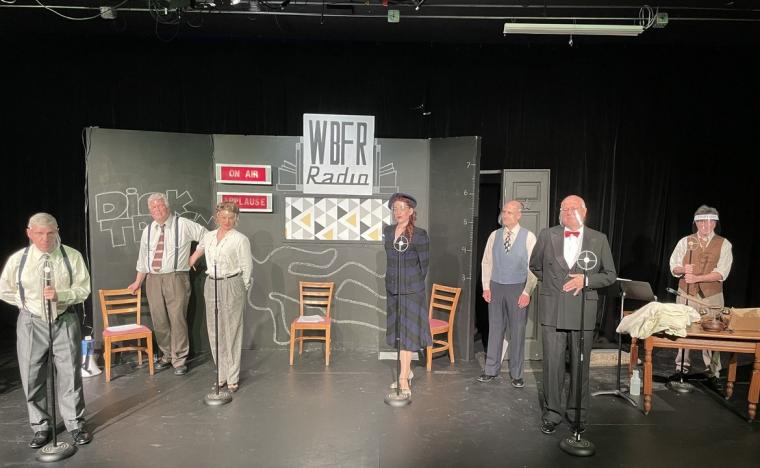 Once again, and hopefully for good, theatre is back in the Quad Cities, and the Black Box Theatre is dipping its toe into the world of live performances with Dick Tracy: A Live Radio Play. Director Lora Adams started Saturday's performance by describing it as a helping of Chinese Food Theatre: We would be full when we left, but hungry for more theatre soon. While this metaphor made me chuckle, I soon realized just how true it was. This charming foray back into theatre definitely left me eager for more.

The plot here nearly doesn’t matter, but it’s like this: The world’s most famous detective, Dick Tracy, is off to enjoy a night at the circus when a murder occurs. What follows is Dick Tracy unraveling the mystery as to who done it. In this fairly brief story, it's likely most audience members will figure out the answer pretty quickly. But what's important is that for this production, the fun isn't so much contained in the mystery or the plot, but what isn't said.

A radio play could be done without much fanfare, but Adams isn't satisfied to simply have her cast stand in front of a microphone and talk. Sure, she designed a set that is reminiscent of a radio studio, complete with microphones, chairs, and other accouterments. (Sara Nicole Wegener and Tom Vaccaro added some lovely chalk drawings to the wall that enhanced the mood splendidly.) Yet while the theatre looks like a radio studio and feels like a radio studio, Adams, happily, isn't content to have her actors' talents be recognized only through dialogue.

What vintage radio program is without a hero? Jim Driscoll was the ever-popular Dick Tracy, and I enjoyed his performance as the famed detective. However, surprisingly, the character actually did little to nothing to solve the show's mystery. His love interest Tess, here portrayed by the outstanding Jenny Winn, had all the proof, and Tracy didn’t seem to figure it out before things went south. But you know what? Driscoll is a treat to watch regardless, so while I would have loved for his character to do more, them's the breaks.

Driscoll's fellow actors bring personae to the stage that are completely separate from the characters they vocalize with their scripts in hand. But the true standout here is Wegener. It’s astounding how completely disinterested she appeared to be in the goings-on around her. From the moment she walked on stage, Wegener exuded an air of total and complete “whatever,” and I have never before seen someone scream while appearing bored... and for the record, it was hilarious. And then she did it again, and yep, still funny. Wegener was a complete delight, but not the only treasure this Dick Tracy had to offer. 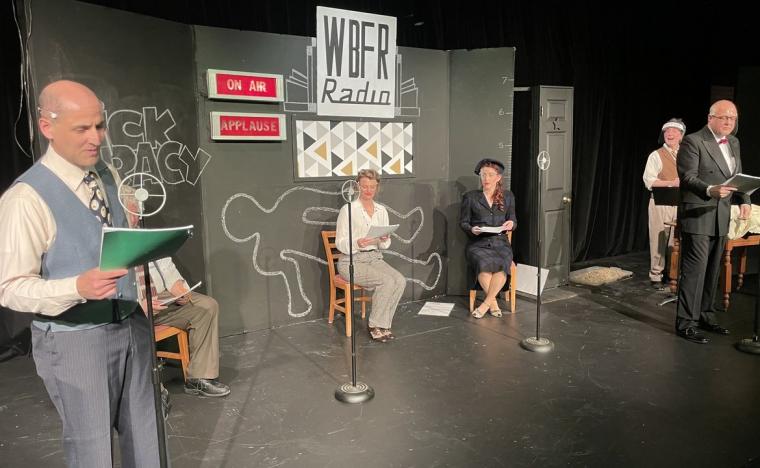 Matt Walsh, for instance, was especially enjoyable for the employment of a red sticker on his face shield when he switched from his announcer character to Duckfoot the circus clown. This small detail amplified the humor, and while there was little confusion as to which character Walsh was portraying thanks to the pronounced vocal variety between Duckfoot and the Announcer, the sticker nose was a charming visual. If we have to use face shields for safety's sake, they may as well be utilized in a creative way, right?

Other pleasing nonverbal moments included Mark Ruebling mockingly mouthing “I’m a princess” during one of the commercial breaks. With only Walsh's enthusiastic announcer seeming to appreciate the jingles, the rest of the on-stage talent was beyond pleasantries, and portrayed outward annoyance as the commercials rolled, adding an extra layer of interest to the performance. (For what it's worth, I found the addition of throwback commercials throughout the show delightful, and because I love a good gimmick, appreciate that I left the theatre with a little treat in hand courtesy of the evening's “sponsors.”)

Adams' production walked a fine line between classic and modern, and although a few moments (especially regarding David Miller's sound design) were definitely not-period, they were wonderfully received. The costumes, meanwhile, were delightfully throwback, making the whole affair seem classy. Doug Kutzili, as Vitamin, was dressed nearly over-the-top in a tuxedo that nevertheless lent beautifully to the air of nostalgia and added to his distinguished personality.

Because no radio show is complete without a Foley Guy to offer up sound effects, this production featured one played by Vaccaro. (Lest you forget his title, his face shield is clearly marked in uppercase letters.) And don't fear: If you've seen other radio-play productions at the Black Box, there's a whole new pile of random objects here to create the necessary noises for Vaccaro to play around with.

The humor Adams manages to interject into Dick Tracy: The Live Radio Play was topnotch. My favorite moment was when four signs were held up in a perfectly timed message to the audience. (I laughed out loud and am still chuckling just thinking about it.) If you’re looking for a wondrously funny and easy way back into a theatre seat, this show’s for you.

Dick Tracy: A Live Radio Play runs at the Black Box Theatre (1623 Fifth Avenue, Moline IL) through March 20, and more information and tickets are available by calling (563)284-2350 or visiting TheBlackBoxTheatre.com.