Do or Dionysus: Genesius Guild's “The Frogs,” at Lincoln Park through August 7 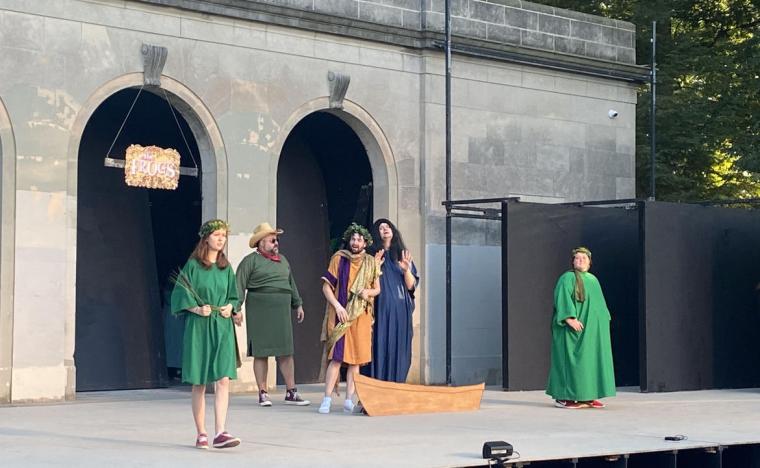 I begin with a confession. In all my years of association with Genesius Guild, Rock Island's own free-Shakespeare-in-the-park-with-classical-Greek-thrown-in-plus-occasional-ballet institution, I have never seen any of their traditional season-ending adaptations of Aristophanes' comedy The Frogs, oft written by Guild founder Don Wooten. They weren't deliberate, but rather weather-dependent choices, as I am a delicate flower who avoids imperfect conditions. Now, as an enlisted comrade-in-arms in the Reader-reviewer army, I was glad to accept this assignment for Saturday's opening night. I usually see old friends there – uh, long-time friends – and this offering was also co-written and -directed by that wonderful duo of T Green and Calvin Vo.

Already fine actors, Green and Vo have been perpetrating their inventive Haus of Ruckus humor since November. I'd seen two of their shows, so likely I had different expectations than others who had seen previous Frogs, but had not seen this pair. Their creative, waggish version satisfied me – plus, running a neat 75 minutes with no intermission, I was able to drive home in daylight (important for we delicate flowers). The Guild pantheon had asked Haus of Ruckus about writing this season-ender after seeing their first production "Jacques"alope, Green and Vo being Guild veterans who had just performed major roles in A Midsummer Night's Dream, which closed the weekend before The Frogs opened. Others in this cast and crew are also fresh from that production – these Lincoln Park folk have always been a hard-working bunch!

The Frogs' central character is Dionysus, the god of theatre, wine, and all-around hedonism portrayed by the terrific Max Robnett, a frequent performer at area venues. He'd played Tragidiot in Haus of Ruckus' “Pants” Labyrinth wearing a toga and Greek-tragedy mask styled like the ones Guild used back in my day – an advance nod to this show. Tragidiot had earned that name with his anguished soliloquies at the drop of a chaplet, while here, Robnett plays an easily-distracted goofball, hopping around from his goals to his lusts like … well, a frog. (Happily, we get to see the actor's face this time.) 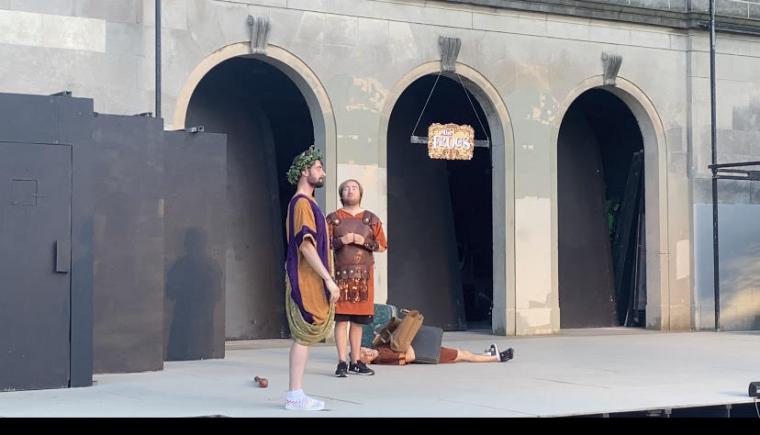 Dionysus aims to get to the underworld and retrieve recently deceased master playwright Euripides, because theatre in the realm of the living has withered. (That's not a wacky Haus of Ruckus thing – it's Aristophanes' actual plot.) In real life, Euripides really had died the year before, so that was current social satire. (And, in Guild season-ending-comedy tradition, so is this – kinda. They occasionally make mild local quips.) Anyway, he sets out with his "unpaid intern" (a.k.a. servant) Xanthius, played fantastically by a limber Jacob Lund in a welcome repeat turn in the park.

Nathan Elgatian's low-key, muscled Herakles (known as "Hercules" in Rome) declines to accompany his half-brother Dionysus on his trip to Hades. (No, Euripedes did not go to hell – the Greeks' Hades was simply the afterlife.) After plenty of hijinks, when the travelers arrive they set up a poetry slam pitting Euripides, played in his usual straight-faced manner by Guy Cabell, against fellow great dramatist Aeschylus, portrayed by Jeremy Mahr, who's something of a theatre god himself.

Mahr, along with Katie Phillips and Haley Wooley, play the amphibians for which the comedy is named, who comment on the action as Greek choruses should, but also get to perform one of the song parodies – and while line dancing, yet. If I understand the program, Green and Vo alternate in the roles of CHERon (your guess about that one is probably right) and Messenger. I saw Green on Saturday, but I'm confident Vo is just as fab. And the delightful Olivia Akers plays a few minor parts, yet still wrings maximum entertainment from them. If she doesn't do more local theatre, I'm going to break into an anguished soliloquy myself. 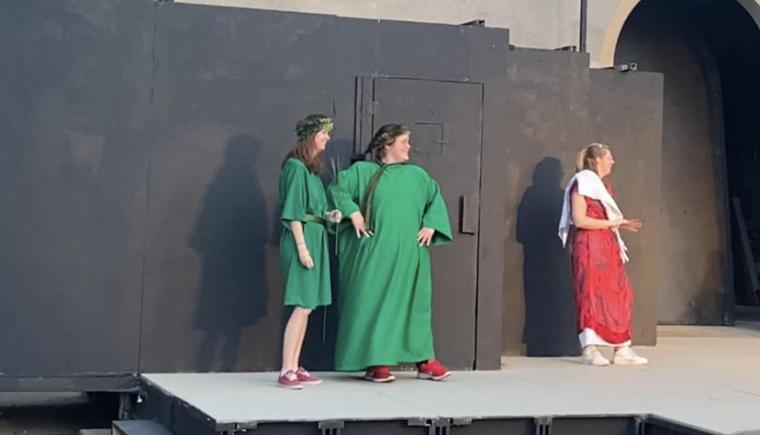 The customary theatrical convention is that performers are unaware of the audience, who are metaphorically sitting behind and looking through the "fourth wall" of any stage setting. In the Vo/Green shows I've seen, the fourth wall was never broken – it simply never existed. They sprinkled references to onstage pretense throughout, and do so again. They don't overuse the convention, though, so it's enjoyable every time. Guild's executive director Isabel Dawson even drops in as the stage manager to hassle the actors. (The Frogs' actual stage manager is Liz Sager.) Some of the script's references were admittedly dated … and by "dated," I mean I enjoyed them. Their contemporary riffs, meanwhile, probably whistled over my vintage blue head. While reminiscing with my old – I mean long-time – friend Patti Flaherty there, she explained a historical visual joke. The orchestra pit/moat, now dry, holds a kiddie pool and a fetching large blue plastic duck in mid-1950s style (incidentally, when the Guild was born). In olden times, the moat had held water during performances. For the last show every season, founding father Wooten would float a toy duck in it, saying, "When the duck's in the pond, it's the comedy."

By the way, the conditions in the park during Saturday's The Frogs were fine, even for this delicate flower, and before showtime, the sun beautifully descended behind the treetops. A heckuva lot of talented people put this production together; see it now, while the duck's still in the pond.