Dog Daze: ”Sylvia,” at the Playcrafters Barn Theatre through October 9 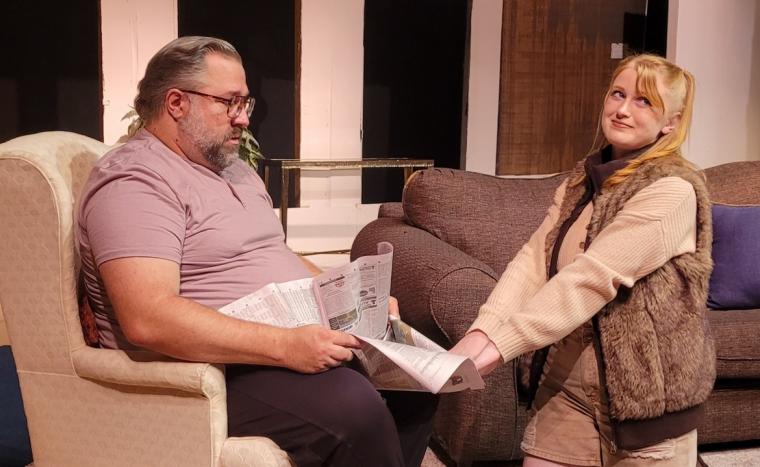 If you were to tell me a marriage could teeter on the brink of destruction simply due to the addition of a dog … I’d have countered that no one would let canine conflict get that far. Only that’s exactly what happens in the Playcrafters Barn Theatre's production of Sylvia, written by A.R. Gurney and directed by Kathy Graham. Friday’s performance ultimately left me feeling like I am killing it with marriage, as both my husband and I agree on our position on getting a dog: While they’re great, dog ownership simply isn’t for us.

It’s shocking, really, that the titular dog could be the catalyst for the number of marital woes she brought to Greg (Jeremy Mahr) and Kate (Carla Stevens). Clearly, there was some strife prior to Sylvia’s arrival: Greg is unhappy with work and the pair are empty-nesters who haven’t figured out how their relationship should move forward. Spoiler alert: Adding a dog that one party doesn’t want isn't the solution.

It has to be said that, quite early on in Sylvia, Kate chimes in and articulates my exact opinion on dogs completely: “I like them just fine, but that doesn’t mean I want one.” So please note that I was pretty much destined to being on Kate’s side here. It was odd, though, because it seemed to me, at least, that Steven’s feelings were on the shallower end of things. Kate, more often than not, is exasperated, and even though she is genuinely annoyed that her husband brought a stray, flea-covered dog into what is a fairly nice New York apartment without even asking first, she does try to make the best of the situation for a while. But throughout, Kate also doesn’t seem to try very hard to reconnect with Greg; she simply complains about Sylvia. 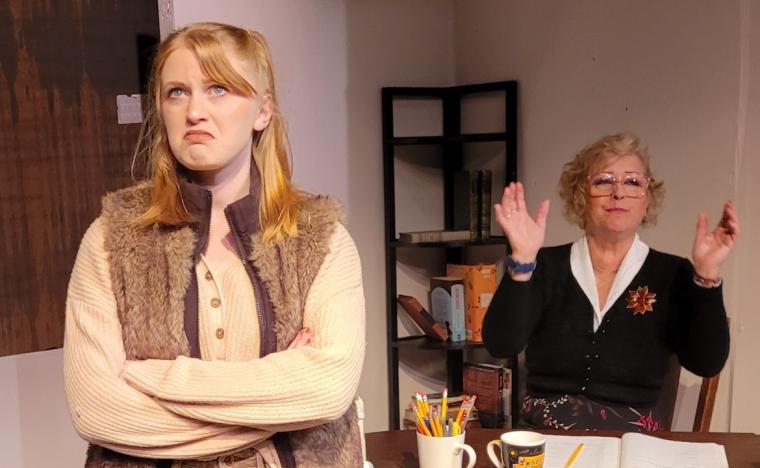 However, the relationship between Greg and Sylvia becomes problematic as Greg uses Sylvia as the escapism for all his midlife problems. Long walks and time spent in the park with other dogs and their owners become the norm, and Mahr brings a completely natural ease to the role. Other than the fact that I completely, across-the-board disagree with his character’s life choices – basically abandoning his job and getting a dog – Mahr is delightful. I also enjoyed that costume designer Bailey Hager had Greg start out in a suit and, as he became more comfortable with Sylvia, his clothing became less stuffy and more comfortably relaxed.

As portrayed by Adrienne Jane Evans, Sylvia is about what you’d imagine from a human playing a dog. Evans’ physicalities are quite well done: she accurately shows excitement, adding things such as shrill barking, jumping up on people – all the characteristic canine behavior one would expect was accounted for. And Mahr and Evans play beautifully off each other, both affectionately doting on one another. The sheer physical size difference between Mahr and Evans amplified who was the alpha in charge of this relationship, yet Mahr – I assume thanks to Graham's discerning direction – never talks down to his pup. In fact, that is largely Gurney's conflict: Greg speaks to Sylvia warmly, as though she is his intellectual equal, instead of likewise speaking that way to his wife, who actually is. I have no beef with Sylvia – she’s a dog. And so, once her basic needs are met, she’s pretty much a happy camper.

Also interesting to me was that Sylvia and Greg seemed bonded and connected from the very start of Sylvia’s introduction to the household, and I never felt a similarly warm connection between Mahr and Stevens at any point in the show. Stevens’ character portrayal just felt more emotionally aloof in the situation, her diminishing value to her husband, and, ultimately, her encounters with the blameless pooch. 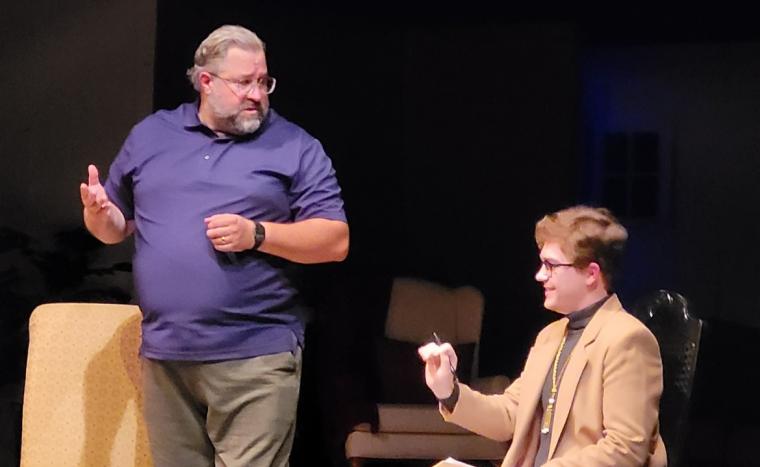 The highlight of this production, for me, was pretty much any time Thayne Lamb was on stage. Playing three very different characters, all with great comedic timing, Lamb was truly a bright spot. Turns out, watching two people fight over whether a dog sits on a couch isn’t that funny. Lamb, however, is. His reactions to every conversation he was in were spot-on and enjoyable, especially when he portrayed Tom, owner of Bowser. (Bowser and Sylvia, ahem, bond during the show.) Lamb kept the show firmly grounded on the comedic side of things when things were otherwise getting too depressing.

I really appreciated that Graham kept the apartment on the upstage portion of Playcrafters’ thrust stage, leaving the downstage to become the park, street, and therapist’s office. Many thanks, as well, to the backstage crew, who did a very nice job hustling around and getting every new scene set seemingly seamlessly. With Eric Teeter’s elevator-jazz sound design to set Sylvia's upscale mood, not one scene shift felt overlong all night.

While I didn’t leave entirely sure about playwright Gurney’s exact point, I like to think it’s ultimately about Kate being involuntarily thrust outside a pack, looking in with resigned, emotional distance at her growing marital rift. With this production, Sylvia, typical dog that she is, is merely along for the ride, happy to receive and deliver warmth and attention wherever she can. Her humans should have been so receptive.

Sylvia runs at the Playcrafters Barn Theatre (4950 35th Avenue, Moline IL through October 9, and more information and tickets are available by calling (309)762-0330 and visiting Playcrafters.com.