Doppel-giggler: “The Comedy of Errors,” at Lincoln Park through July 2 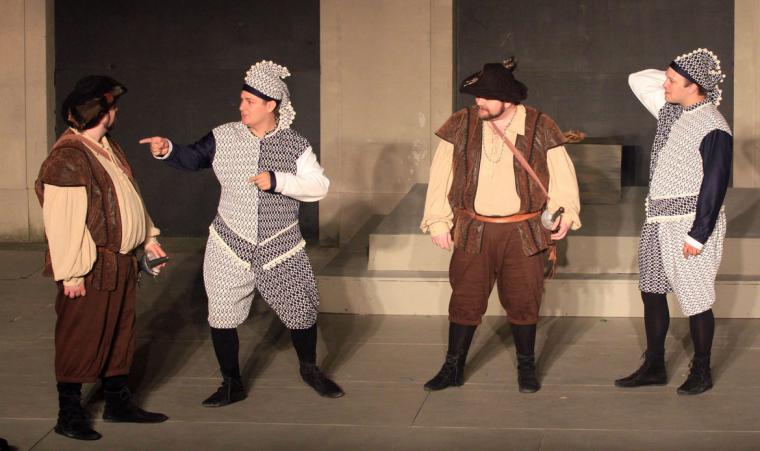 “Welcome to theatre in the park!” announced Genesius Guild Executive Director Doug Tschopp at the June 24 presentation of The Comedy of Errors. Tschopp didn’t, however, say this during his customary greeting and introductory remarks. He said it during an unplanned break roughly 20 minutes into the Shakespeare comedy while he, director Bryan Woods, and a stagehand used makeshift mops to soak up the accumulating rain that had been causing performers to slip. To appreciative laughter, Tschopp added, “We’re accepting donations of old towels,” and Woods was greeted with both laughs and applause when, in the show’s second half, he was forced to return to the stage to mop again. It was that kind of night. By which I mean it was a cheeky, endearing night with a production to match, and made all the more memorable for the anything-can-happen vibe supplied by Mother Nature.

Understandably, several patrons who didn’t bring umbrellas chose not to stick around after the first heavy drops fell, and following a completely dry intermission, several more left when another rainfall was accompanied by mild yet anxiety-producing lightning and thunder. (One of the things Tschopp did say in his opening-night speech, when it was still lovely out, was “We ordered this weather just for you!” In retrospect, that seems kind of mean of them.) But those of us who stayed to the end were treated to a winning rendition of the Bard’s silliest – and certainly shortest – farce, and one that reminded us that the clichéd, tongue-in-cheek theatre directive “Louder faster funnier!” is, generally speaking, pretty darned good advice.

Granted, it’s not unbendable advice, as was demonstrated when Woods’ production began softer, slower, and more serious with Comedy of Errors exposition by Earl Strupp’s bereaved, imprisoned Aegeon. Setting up Shakespeare’s deliciously convoluted saga involving two sets of separated twins, Strupp delivered his tale of woe with a hushed pain that made you lean in to catch his every utterance, the proceedings starting on a note of genuine human suffering. And it was a shrewd decision to open the play this way, because the suffering that followed was of a wholly slapstick variety – even if, on Saturday’s rain-soaked stage, it was just as often slip-stick. Ears were pulled, posteriors were kicked, a whack-job doctor performed a pseudo-exorcism, and excepting one clearly unhappy infant in the crowd, a good time appeared to be had by all – particularly the young men cast as identical servants both named Dromio. 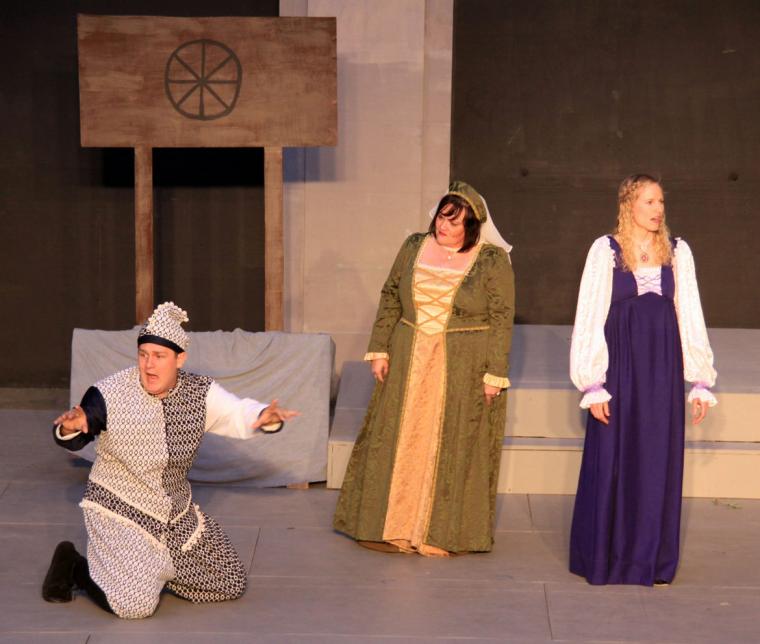 Chris Lerch’s Dromio of Syracuse and Tyler Henning’s Dromio of Ephesus, in truth, don’t look much alike. (Lerch, a terrific actor whom I can’t recall seeing on an area stage before, actually resembles a Dead Poets Society-era Josh Charles.) But the portrayers’ expressions of wide-eyed innocence and escalating bewilderment matched perfectly, even though the Dromios spend nearly all of the show apart. Better still, Lerch and Henning were loud and fast and very funny. With the abused Dromios constantly misidentified and accused of idiocies they didn’t perpetrate, the alert, energetic duo imbued puzzlement with unmistakable performance joy, and had plenty of spectacular individual moments. Lerch was at his sharpest when describing an unseen kitchen maid through riotously cruel comparisons to countries, and Guild veteran Henning earned major cackles for even minor bits, whether entering a scene skipping rope or procuring a crowbar with an exhausted “Ta-da!” and no one around to appreciate his triumph.

As for Comedy of Errors’ other twins – the Dromios’ masters Antipholus of Syracuse and Antipholus of Ephesus – they’re described by Aegeon as “one so like the other as could not be distinguished.” Man, he ain’t kiddin’. Because in Woods’ production, the Antipholuses (Antipholi?) are played by real-life brothers Doug and Gary Adkins, and this is an incredibly rare case where smart, witty casting actually leads to unintentional awkwardness: The performers look and act so similar that even we aren’t always sure who’s playing whom. This works for the plot, of course, but also tends to mute the jokes, because it now seems perfectly reasonable when A. of E.’s wife Adriana (Mollie Schmelzer) takes in the wrong husband or the Dromios can’t fathom their ever-switching masters’ mixed signals – the poor guys shouldn’t get beatings for that. Both Adkinses (Adki?) are solid in their mostly straight-man roles, yet unfortunately, their inseparability, right down to their frequently subdued readings, yields just as much confusion as it does pleasure. (As she did in Genesius Guild’s 2008 take on the material, costumer Ellen Dixon dresses the Dromios to look like mirror images of one another, and I wish a similar approach were taken for Doug and Gary, which could be accomplished simply by having one of them wear his shoulder bag on the opposite shoulder.) 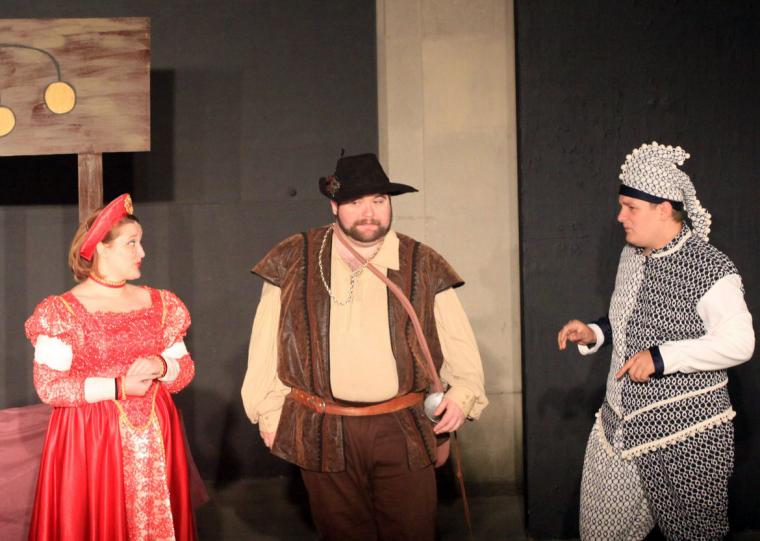 While Shakespeare’s supremely droll dialogue and goofy scenarios certainly help clarify the mistaken-identity matters, this particular Comedy of Errors could still use a bit more zing than we got on opening night. To be fair, stage conditions no doubt prevented the actors from running around with the speed and force they could, and there’s nothing to be done about the lack of accompanying music during scene shifts, which would have helped cover some of the dead air. (On that note, it was odd that scene changes were accomplished both by costumed actors and by crew members dressed in black; one or the other would’ve been less distracting.) But there was also evident uncertainty about lines, and subsequently uncomfortable pauses, at numerous junctures when the show should’ve been at its loudest/fastest/funniest. And while much of the climactic sequence was a hoot, its overall pacing also slowed to the point that I, for one, was silently begging the actors to pick up their cues before another unexpected downpour sent us all home before the curtain call.

Happily, though, these were problems that can be easily corrected by weekend two, and there was so much that was good on Saturday that only those deathly averse to being sprinkled on could’ve left Lincoln Park in a foul mood. Sarah Wallace, a performer whom I’ll never tire of raving about, is a frisky, radiant delight as Adriana’s sister Luciana, never better than when receiving an unwanted proposal and, after some thought, secretly digging it. If Dixon’s typically masterful wardrobe designs find their apex in the Dromios’ suggested black-and-gray chain mail, the gorgeous red gown worn by Mallory Park’s Courtezan would land a close second, and Park herself proves to be the physical embodiment of that dress – bold, fiery, and thrillingly present. (Unlike the dress, Park’s also hilarious.)

Given minimal stage time, Joie Stoefen makes a big impression, vocally assured and deservedly confident as a servant with late-breaking news. And with additional roles enacted by such committed performers as Mischa Hooker, James Alt, Pierce Howard, and Melita and Philip Tunnicliff, special laughed-’til-I-cried praise must go to Jacob Lund for his riotous Dr. Pinch. Flailing his arms about and waving his crucifix and speaking, from beneath a gloriously tacky fake beard, with a strangled shriek that sounds like Gollum as an operatic tenor, Lund gives this Comedy of Errors exactly the Pinch of unbridled hysteria it needs. True, he’s only around for about five minutes. When they’re minutes this unforgettable, you really don’t need more.

The Comedy of Errors runs at Lincoln Park (11th Avenue and 38th Street, Rock Island) through July 2, and more information is available by visiting Genesius.org.