A Dream, Differed: “A Raisin in the Sun,” at the Playcrafters Barn Theatre through July 24 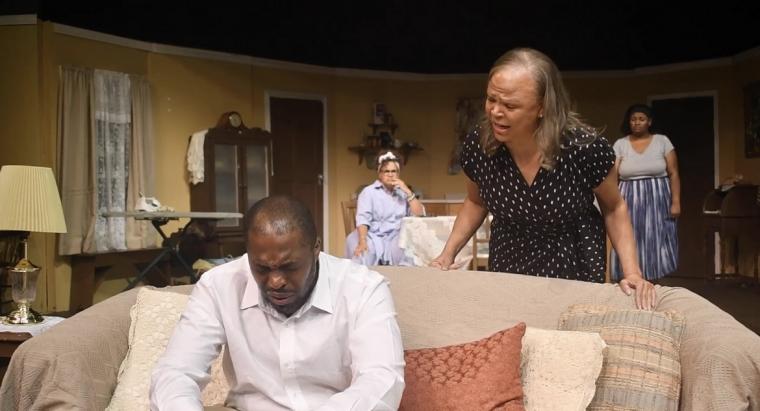 Ashley Harris, Nichole Collins-Payney, Teresa Moore, and Raja Mims in A Raisin in the Sun

Lorraine Hansberry's A Raisin in the Sun, one of the all-time classics of American theatre, debuted on Broadway in 1959. To the 28-year-old Hansberry's surprise, it was a smash, and hers was the first script by a black playwright to make it to Broadway. That original cast performed in the 1961 film adaptation, also written by Hansberry. The Playcrafters Barn Theatre, meanwhile, presented this drama in 2009 and staged a sequel of sorts, author Bruce Norris' Clybourne Park, in 2018. Now, A Raisin in the Sun is again at Playcrafters. I saw it on Saturday, and am happy to say that director Gaye Shannon Burnett's production does full justice to this gem.

The play's title is taken from the 1951 poem "Harlem" by Langston Hughes, who asked if "a dream deferred" dries up "like a raisin in the sun." The dreams of a black family living in Chicago's South Side in the early '50s are universal – higher education, a nicer home, a better life – and unless you are extraordinarily lucky, the only path to realizing these dreams is paved with money. And the family's matriarch Lena Younger, played by Teresa Moore, is about to get some.

Moore captivated me in Playcrafters' Proposals in 2018, and her subsequent stellar performance in Marie & Rosetta made me a staunch fan. Here, she makes Mama everything she should be: determined, wise, forthright, upbeat, and a little weary. The clan's other ruler is Ruth, Mama's daughter-in-law, played with solid confidence by stage veteran Nichole Collins-Payney. This Playcrafters role is a striking turnaround from Collins-Payney's giddy British fashionista Gwendolyn in The Odd Couple (which Moore directed) from a few months ago. Ruth is a big bundle of fret, and like many a wife and mother, she keeps the household running with her daily prodding of son and husband as much as with ironing and cooking. 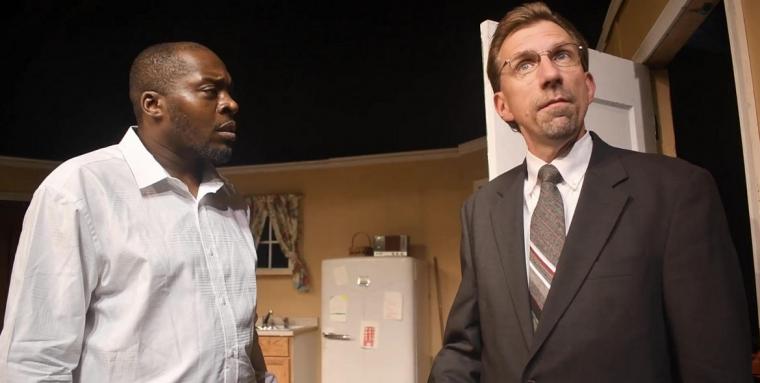 That husband, Mama's son Walter Lee, is played by Ashley Harris. He's fairly new to the stage, but I never would have known it. Harris moves well, and speaks clearly and audibly – vital skills that many beginning actors don't immediately develop. He also boasts control over an impressive emotional range, making the often irritable Walter sympathetic – a man who keenly feels his inability to provide for his family while working at a job he hates.

Walter grumbles, often about women in general, and those in his family in particular. His childish cruelty is at its height when unleashed on his college-student sister Bennie (short for Beneatha). As portrayed by Raja Mims, Bennie whips her own verbal knives at her brother casually and effectively. I admired Mims' refreshing take on Bennie, who, though defiant, is calm rather than strident. She freely proclaims her intention to become a doctor, as well as her radical (for the time) views on marriage and God. Beneatha is the embodiment of "young, gifted, and black," a phrase Hansberry crafted. She's also the only one in the family who doesn't expect Mama to share the impending windfall with her.

Bennie is seeing Asagai, a Yoruban man from Nigeria. Anthony Mitchell, another neophyte actor, also does an outstanding job (with a convincing accent) portraying the philosophical, sophisticated, yet warm-hearted student. DeMario Rankin plays Bennie's other suitor George, who's obsessed with surface appearances and material things. Rankin makes him appropriately low key, sliding insults into conversations as casually as Bennie does with Walter. Bralan Reynolds steps onstage for his first role, as Ruth and Walter's son. Travis is as self-absorbed as any young boy, and Reynolds' portrayal is comfortable and straightforward.

Frequent Playcrafters actor and director Chris Zayner is Karl Linder, an uninvited guest who paints a picture of the consequences of a black family living in a white neighborhood, and does so circuitously, delicately, and menacingly. His Linder is exceedingly polite and just as uncomfortable as his hosts. Seasoned performer LuAnne Sisk delivers a wonderful comic turn as neighbor Mrs. Johnson – the performer should have her own weekly show – while Kermit Thomas, who directed Playcrafters' The Piano Lesson last summer, assumes a small role as Walter's friend Bobo. 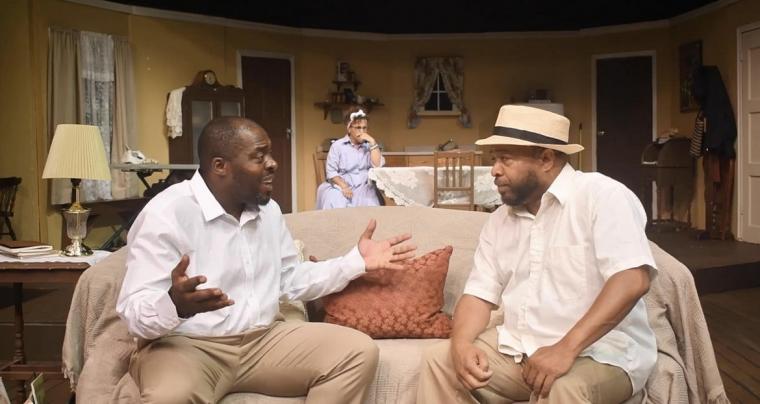 A Raisin in the Sun is not a grim show overall; everyone gets some funny lines. However, when things turn bad, it's beyond grim – it's catastrophic, and Harris' rendition of Walter's breakdown is electrifying. The deep intensity and shades of his anguish, the varied ways in which Harris sustains the changing emotions, are profound and powerful.

A few aspects of this production, I felt, could be improved. In the first scene, the pacing was far too slow; it's the morning of a school and work day, and a frenetic atmosphere would be appropriate. Volume, at times, was also a problem. As Playcrafters has a thrust stage, it's a given that performers can't always face the entire audience. However, too many lines were inaudible. At the other extreme, occasional backstage noise was distracting. And the modern shipping labels on cardboard boxes, complete with period-inappropriate bar codes, made me wince.

Minor flaws aside, though, I'm so thankful that the Raisin in the Sun cast, crew, and staff brought this script to life so beautifully. Hansberry died of pancreatic cancer barely six years after her play's Broadway premiere. I'm mourning her now, more than 50 years later, because she clearly had so much more to say.

A Raisin in the Sun runs at the Playcrafters Barn Theatre (4950 35th Avenue, Moline IL) through July 24, and more information and tickets are available by calling (309)762-0330 and visiting Playcrafters.com.