Elf-'in: The Mississippi Bend Players' “The Santaland Diaries,” at Augustana College through December 15 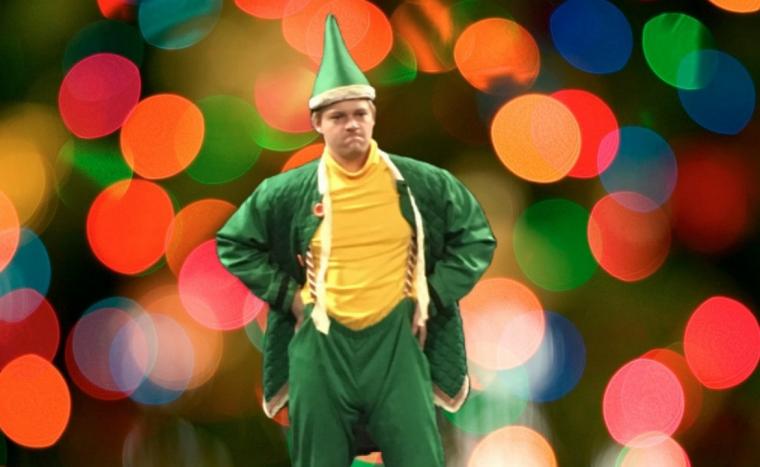 Keenan Odenkirk in The Santaland Diaries

At Tuesday's preview performance of the Mississippi Bend Players' The Santaland Diaries at Augustana College, I had everything I needed for a respite from the relentless, forced holiday cheer outside. I had my seat in a cozy venue among a small passel of students revved up for their imminent academic break. I had a play by David Sedaris, one of my favorite writers. I had another lovely (and festively sparkly) Augustana set to gaze at, this one by technical director and scenic/lighting designer Mark Lohman. I had Keenan Odenkirk, one of my favorite actors. I had my cynical holiday exasperation dialed up to eight. It was the perfect storm.

Actor/director Joe Mantello adapted this play from Sedaris' comically exaggerated memoir piece recounting his experiences working as an elf, wrangling kids for visits with a department-store Santa. The stage adaptation debuted in 1996, and is set at the venerable Macy's in the early '90s, when people looked in the newspaper for jobs, cell phones were flip models, and soap operas roamed freely. Sedaris, a prolific writer (and you may be familiar with his just-as-skewed sister Amy), has been reading his original Santaland Diaries on NPR since 1992, and in that audio-only format, it has amused millions. Seeing it performed live is a whole other twinkling-Christmas-ball game.

In December, Macy's huge flagship store in New York City goes whole-hog for kids' visits to Santa (which, as with every store's Yuletide set-ups, are meant to get shoppers in the door for a spending frenzy). The many aspects of the store's magical realm are handled by a handful of Santas and a squadron of elves, most of whom are around college-age – including Sedaris, who was not-so-college-aged. Like so many who journey to the Big Apple, he had visions of becoming a famous actor and being BFFs with even more famous actors. However, he resigned himself to working in an elf outfit because he needed the money, and by doing so found humor and astonishment while observing the changing kaleidoscope of human behavior (sometimes adding to the chaos by hurling a mischievous candy cane into the works).

Odenkirk, who graduated from Augustana in 2018 and now lives in Chicago, came back to tread these familiar boards as the sole (but dual) character – Sedaris, but also his elf self Crumpet. He and director Jennifer Popple have crafted ways to keep the action going without other performers to play off of. In telling these tales, Odenkirk populates the stage with Sedaris' co-workers and the families who come to Santaland, and I saw them clearly in my mind's eye. 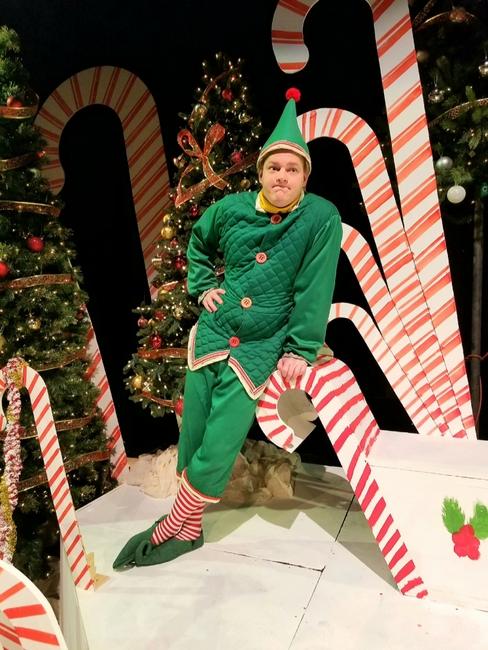 Although holding an audience for an hour solo isn't easy, the actor performs in an easy-seeming flow. Odenkirk is never stagnant – he owns the stage with his movements, expressions, and a symphony of vocal skills. The words are funny to begin with, but his performance adds so much more. As Odenkirk tells of Sedaris' experiences and impersonates the Macy's rabble, his amusement, discomfort, incredulousness, embarrassment, exasperation, and comedic pauses expand the words on the page and add fascinating shades of color to this man reluctantly wearing an elf hat. This is not an impersonation of Sedaris, and it's not meant to be. But I'm confident that Sedaris would find Odenkirk's take on the material as hilarious as I did.

It should be mentioned that in this tale, with every aspect of life amplified by the stress, avarice, and frenetic nature of the holidays, kids are kids and adults are sometimes jackassses – which means that Sedaris has included some sexually suggestive material and decidedly non-politically-correct descriptions of some of the Macy's employees and visitors. Kids shouldn't see this one.

I, however, have seen The Santaland Diaries before, and the Mississippi Bend Players' small production staff gives it the oomph needed to really put us right there in Santaland along with Sedaris/Crumpet. Stage manager Samantha Flipp does her job solo. Odenkirk's brother Tristan, an Augustana senior and also a very fine actor, is the sound designer, and the pre-show audio, including a hodgepodge of carols and sound bites from holiday movies, helps set the jolly-yet-strained, slightly surreal atmosphere. Even the pre-show announcements are funny. And, as always, the intimacy of Augustana's Brunner Theatre means that the audience is so close to the story that we feel its realness and immediacy.

As I left the theatre, a picturesque light snow was falling gently, and looking up through the darkness at the bare branches, I actually felt that elusive Christmas spirit. I planned to go home, make myself some cocoa, and get comfy to reflect on how different perspectives, and laughter, can get us through hard times – and that's just what I did. Snarky though this look at Christmas may be, it's a refreshing, wonderful antidote for those whose holidays may be too hectic, too sickly sweet, or too serious. The real, present-day Macy's Santaland takes reservations now, and reservations are also in order for MBP's highly entertaining Santaland Diaries. Give yourself the gift of laughter. Yeah. I said it.