Everything’s Swine: “The True Story of the Three Little Pigs,” at the Circa '21 Dinner Playhouse through July 6 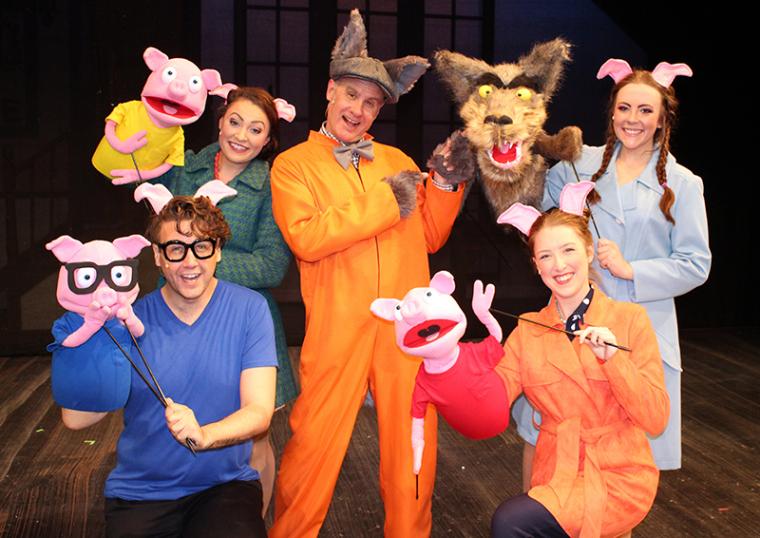 There are two sides to every story. And no matter what you think you know, the Circa '21 Dinner Playhouse’s delightful children’s show The True Story of the Three Little Pigs is here to lay the facts all out for you so you can decide for yourself.

Based on Jon Scieszka's and Lane Smith's children's-book spin on the classic story, The True Story of the Three Little Pigs follows the trial of Alexander T. Wolf (Brad Hauskins), known in other tellings as “Big” and “Bad” (but you can call him Al), for his alleged destruction of two piggy houses … and for murder! Directed and choreographed by Ashley Mills Becher, this adaptation of a familiar tale from the wolf’s perspective offers twists and turns, and it’s all set to music.

From the start, Brooke Myers' Magill, news-reporter pig extraordinaire, creates excellent rapport with the kids in the audience – er, make that the jury. (That’s right: In this production, the audience is in the “jury box” and gets to decide the fate of Mr. Wolf, so listen carefully while the facts are presented.) Myers was spunky and evidently eager to be involved and connect with the crowd at Thursday's afternoon performance. Obviously, we were meant to support Magill throughout the show, but Myers made that support incredibly easy to commit to, as she was significantly more ebullient than others in the cast. 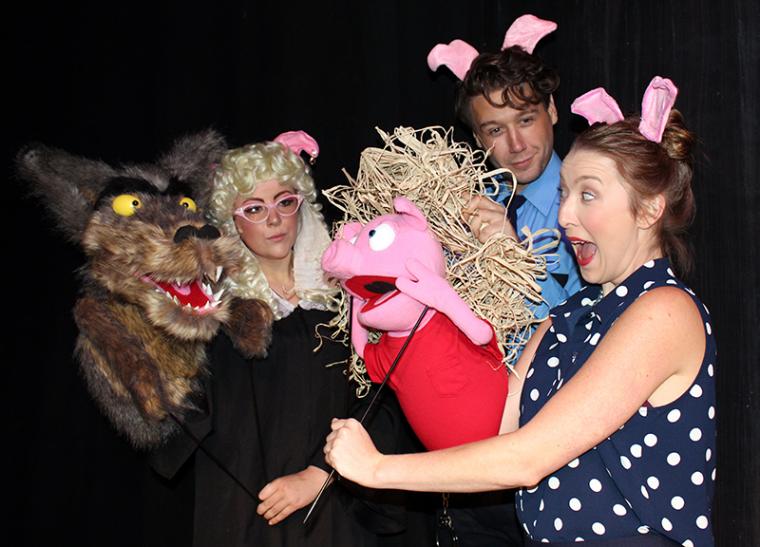 In the Piggsylvania courtroom, Joe Arnotti carried a lot of weight on his pork shoulder, playing no fewer than five different pigs throughout the production. One of Arnotti’s characters, the bailiff Rocky, sported an accent not unlike his boxing namesake, and this was the particular role in which Arnotti was able to really find depth. He also seemed to have the most fun as Rocky, leading the whole theatre in a rousing rendition of the “Piggsylvania National Anthem.” Don’t worry: Even if you don’t know the words, the tune will be familiar, and the kids seemed to have a great time standing up and singing along with the cast.

When the over-confident prosecutor Julia (Alyssa Flowers) presents the story from her point of view – the classic version of “The Three Little Pigs” you’re probably familiar with – she does so via a puppet show set to the song “The Case for the Prosecution.” The bright and engaging puppets, courtesy of creator Seth Chappell, were very cleverly used by their handlers. In truth, the puppets nearly distract from the fact that everyone in the courtroom, including the less-than-impartial judge Prudence (Madison Duling), is participating in the retelling. Magill quickly (and quite rightly) points out to the jury that no one seems to be on Al’s side. As it happens, Al, who is representing himself at the trial, is hardly allowed to question any of the witnesses. Everyone, alas, already thinks poor Al is guilty!

Although required to spend the bulk of this hour-long presentation sitting in a chair, Hauskins’ choice to not let Al appear indignant in the face of the injustice he faced was an interesting one. It was actually an ideal decision to crank up audience sympathy by not acting at all Big or Bad. (Truthfully, this Al is a bit of a doormat.) Hauskins, however, won the costume jackpot courtesy of designer Sara Wegener. Sporting a bow tie and suspenders to class up the gray-and-black business-casual look, Al was a very handsome, personified wolf – a dapper standout in a sea of pigs. I also appreciated that Wegener went exclusively with pink ears and tails to transform the cast into piggies, no snouts required. (Becher did, though, sprinkle in some snouty choreography, which was a fine touch.) 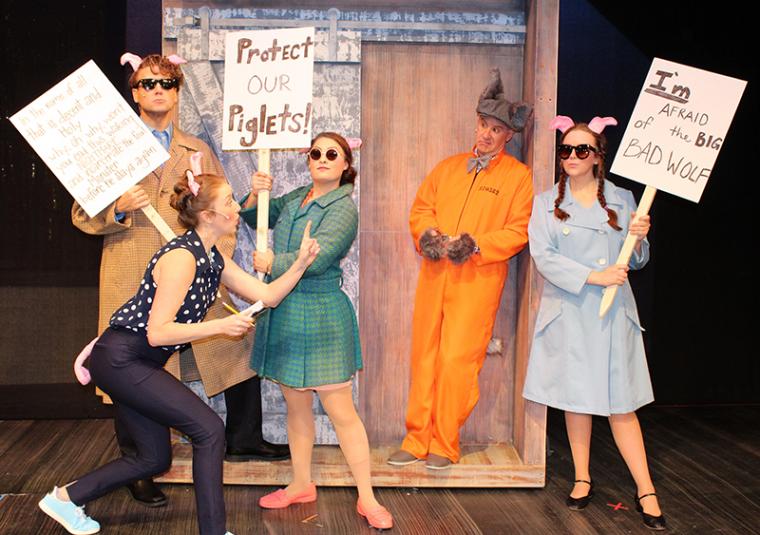 The True Story of the Three Little Pigs’s upbeat music is wonderfully wacky. While there wasn’t any one song that stood out as a highlight, music director Shelley Walljasper had all five actors on the right notes while Becher had them dancing about, including in a wholehearted attempt to “floss,” which was a clear highpoint for the kids. The show’s humor offers a little something for everyone, with plenty of physical gags for the kids – butts may be notoriously funny, yet butts-with-tails are clearly a riot – and loads of smart puns and campy music-lyric references interspersed for grown-ups to enjoy.

What makes The True Story of the Three Little Pigs distinct is that it’s truly a choose-your-own-adventure musical. Depending on the volume of oinks and squeals (really), the audience decides whether Al is innocent or guilty, and while I’m just guessing, this splendid cast of five likely has an alternate version of “Hurrah! Hooray!” ready to go depending on what verdict the jury-box audience picks. Regardless, this amusing production will have you questioning everything you thought you knew about this tale, and then leave you in hog heaven. And that’s the truth.

The True Story of the Three Little Pigs runs at the Circa '21 Dinner Playhouse (1828 Third Avenue, Rock Island) through July 6, and more information and tickets are available by calling (309)786-7733 extension 2 or visiting Circa21.com.