Evil Under the Sunshine State: "Murderers," at the Black Box Theatre through February 11 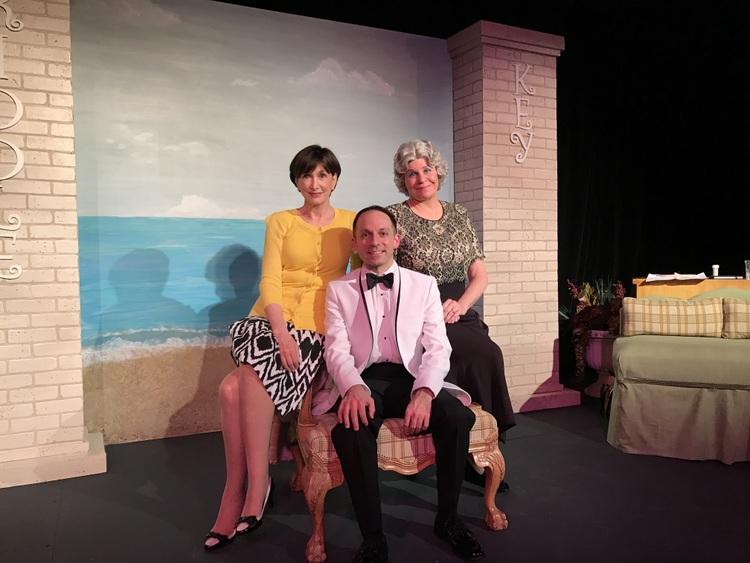 Murderers is author Jeffrey Hatcher’s blanket title for his trio of monologues suggesting Twilight Zone episodes written by O. Henry, and in its current presentation at Moline’s new Black Box Theatre, our first sight is of monologuists Brent Tubbs, Nancy Teerlinck, and Lora Adams standing in a row, each in turn stating, “I am a murderer.” So give director Adams’ production honesty points right off the bat, because for 100 minutes on January 28, these three actors positively killed.

If you were fortunate to catch the Curtainbox Theatre Company’s 2008 staging of Hatcher’s stage triptych Three Viewings, you know the playwright has a unique and enviable talent for expansive, occasionally unnerving, frequently uproarious performance pieces that are like the aural equivalents of roller-coaster rides. His dependence on pop-culture references tends to date his works (among the name-checked here are Diana Vreeland, Bob Barker, and Marcus Welby, M.D.), but the works themselves make for enthralling listening. Thanks to its cast, Murderers – collectively set in Florida’s fictional, corpse-ridden Riddle Key Luxury Senior Retirement Living Center & Golf Course – also makes for enthralling viewing.

Its first actor’s-catnip showcase, “The Man Who Married His Mother-in-Law,” finds financial under-achiever Gerald Halverson (Reader theatre reviewer Tubbs) wedding his partner’s dying mom, at both women’s behest, to secure a tax-free family fortune. Needless to say, events don’t go according to plan. They do, however, go according to Hatcher, meaning Gerald’s relatively straightforward – if slightly icky – scheme is quickly complicated by interlopers, unexpected attachments, and devastating bad luck, all of which Tubbs fleshes out in a masterful portrayal. Those familiar with Tubbs through ComedySportz won’t be surprised by his relaxed ease at assuming characters, voices, and personalities at a hat’s drop, and he does wonderful work enacting broad East Coast stereotypes with names such as Peppar and Spiffy and Arthur Addalot. Yet Tubbs’ comedic facility doesn’t prepare you for the rushes of true feeling as Gerald describes his romantic conundrums, or his apologetic horror at his murder plan, or his ironic resignation as fate gives him one final kick in the ass. You’ll laugh during Murderers’ opener, but Hatcher and Tubbs remind you exactly who, in the end, always gets the last laugh.

Monologue two, “Margaret Faydle Comes to Town,” casts Teerlinck as retired senior Lucy Stickler, whose world turns upside-down when her husband Bob’s former mistress establishes residence at Riddle Key. The piece opens and closes with Teerlinck absentmindedly doing needlepoint, and proves to be like what you’d get if Double Indemnity began and ended with Barbra Stanwyck playing solitaire. A juicy, tightly plotted tale of betrayal and revenge, it’s ultimately the saddest of Hatcher’s Murderers offerings, but please don’t tell Teerlinck that, because (a) she’s doubtless already aware, and (b) you wouldn’t want her to be even one iota less hilarious. I’ve enjoyed the local-theatre veteran in numerous shows over the years, but have never seen her as sharp-witted, casually confident, and divinely human as she is as Lucy Stickler, and man is she a riot; I could’ve listened to Teerlinck’s bitchy approximation of Margaret’s vowel-stretching cadences, or Bob’s pathetic attempts at lying, for hours on end. Witnessing new stage talent is a thrill. Witnessing established talent unquestionably top itself may be a bigger one.

Director/co-star/Black Box co-owner Lora Adams serves up Murderers’ final piece, “Match Wits with Minka Lupino,” in which the friendly, chatty receptionist Minka details how her encounters with cruel staffers, pushy salesmen, loathsome visitors, and the like led to her almost single-handedly turning Riddle Key into a morgue, and not one for the elderly. If we can’t get Adams to reprise the 90-minute, one-woman Bad Dates that she performed, exquisitely, for New Ground Theatre in 2007, I guarantee this is the next-best thing. Her punchlines are perfectly delivered curve balls – you know they’re going to hit their marks but are never sure how – and, like Tubbs and Teerlinck, she’s a spectacular mimic; I laughed so hard at Adams’ “conversation” between Minka and a tobacco-voiced nurse that had I been chewing gum, it would’ve wound up in the hair of the patron in front of me. “Match Wits” might be Hatcher’s most convoluted offering, but in Adams’ hands it’s also the funniest, with its singularly gifted portrayer also ending Murderers on notes that are unfailingly touching and endearing – despite, you know, all those dead bodies.

And a note, too, about Adams’ and co-owner David Miller’s Black Box Theatre itself: It’s lovely. Simply and elegantly furnished, the brightly lit venue felt welcoming from moment one, and the stage space and seating area exuded warmth and the promise of professionalism – one that was handily fulfilled via Michael Kopriva’s minimalist yet artfully decorated set, Miller’s charming introductory remarks, and, as indicated, what transpired after. The Black Box Theatre’s debut would have been the story of the night if Murderers itself weren’t so freaking good.

Murderers runs at the Black Box Theatre (1623 Fifth Avenue, Moline) through February 11, and more information and tickets are available by calling (563)284-2350 or visiting TheBlackBoxTheatre.com.