Extra-Credit Assignment: “I & You,” at the Black Box Theatre through July 24 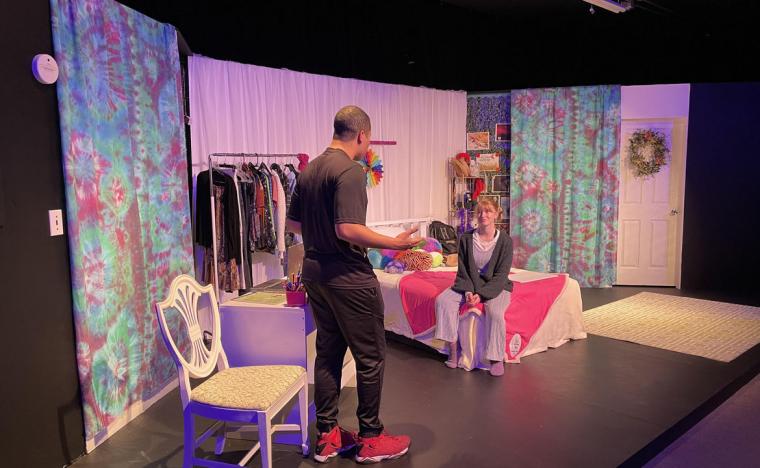 Michael Alexander and Adrienne Jane in I & You

Some local companies, after spending most or all of 2020 dark, have chosen shows with one- or two-person casts for their 2021 seasons. It's a solid solution to the dilemma of assessing scripts so far in advance, without knowing how a deadly virus might continue to affect us. Additionally, the practice of theatres selecting pieces with micro-casts showcases the wide variety of such productions out there – and, as always, limitations spur creativity; not only in which shows to do, but how to stage them with the least risk to cast, crew, and audience.

That said, even within the subset of meritorious solo or duo shows, author Lauren Gunderson's I & You is a particularly outstanding and imaginative two-person play unlike any I've seen in the Quad Cities, and one to which the Black Box Theatre did full justice. I attended opening night as one member of an equally appreciative crowd.

Adrienne Jane plays Caroline, a teenager reveling in the sanctuary of her bedroom, which, like most people's bedrooms, is a fair reflection of herself. (A bunch of orchids go to set designer and theatre co-founder Lora Adams: Plush toys with artistic photographs, and a sophisticated Martha-Stewart-looking wreath next to whimsical tie-dye curtains, reveal that this is the nest of a young woman in metamorphosis.) Caroline's prickly, sometimes rude manner alternates with her who-cares breeziness; as is revealed, she actually has much to be distressed about. Blunt and circumspect by turns, Caroline affects a flippant air and false bravado, complete with eye-rolling and expressions of disgust. (If you were a teenage girl, or ever knew one, some of this will probably be familiar to you.) 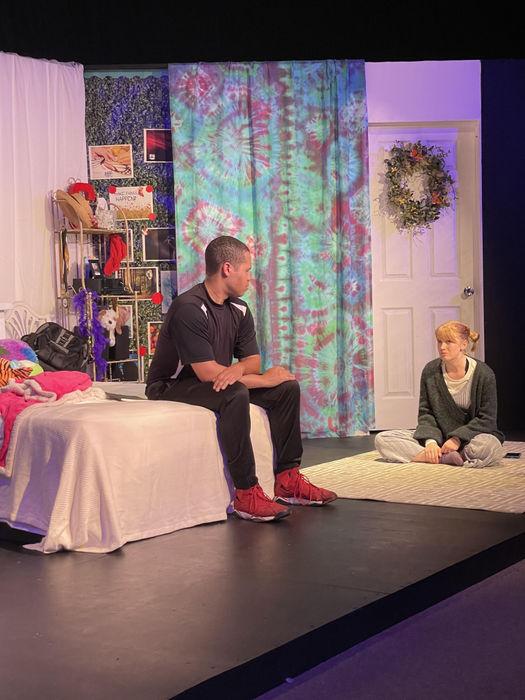 However, if you don't know Jane, you might think, “She's a teen, so of course she's convincing playing a teen. What's the big deal?” Well, this actor is decidedly not a teenager – and as I did a show with her some years ago when she was one, I can aver that she was not this breed of teenager. More importantly, Jane has clearly developed her acting skills tremendously over the years … and she was no slouch then.

Her stage partner is equally talented and riveting to watch. Michael Alexander has been seen on five Quad Cities stages, as well as others, and will soon leave the area to pursue his acting career in New York City. Watch out, Big Apple! This actor is also not a teenager, and his character is also a profusion of incongruities, though a more guarded one. Alexander is thoroughly convincing as Anthony, a slightly awkward, self-conscious youth who nonetheless has a mission that he's determined to carry out despite Caroline's rejections, protestations, and studied indifference.

It's a bold move to approach a young woman as Anthony does, especially one whom he doesn't know, and his apprehension wrestling with his resolve is apparent. In Alexander's performance, I could feel the pull between Anthony's hesitant manner and his drive to achieve his goal to work on a school project with Caroline, who previously knew nothing about it and wants nothing to do with him. While trying to persuade her to collaborate, Anthony zealously introduces Caroline to his favorite poetry and music. His fundamental stillness, mirroring his determination, is a perfect foil for her squirminess, which matches her avoidance of getting enthusiastic about – well, anything. 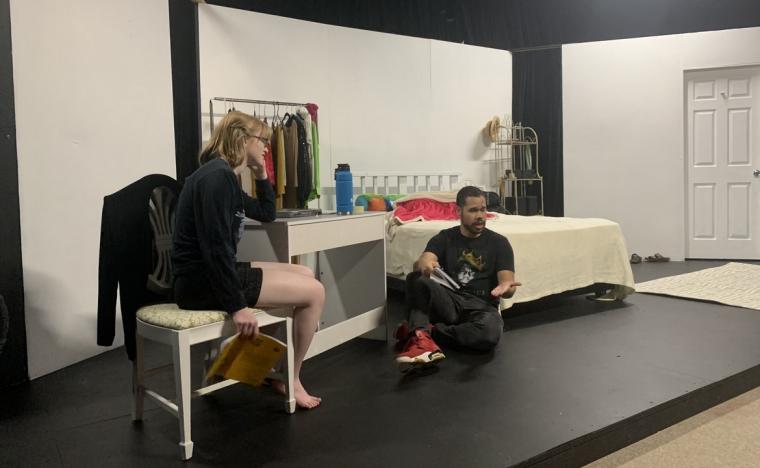 At an intimate theatre such as the Black Box, almost every seat is equivalent to a front-row seat at a bigger venue. In other words, the performers are pretty much up in your grill the whole time, and the actors' expressions and body language must be subtle – more akin to film acting than stage acting. Jane's expressions of Caroline's changing emotions and reactions are remarkably realistic, as is her limber but sometimes awkward physicality. Alexander, meanwhile, must convey similar attitudes, but without the aid of over-activity. Both I & You actors sound like they're simply speaking, not reciting scripted dialogue, and Alexander and Jane are dynamite together, backed by a skilled staff and crew.

Director Kayla Jo Pulliam has also performed on the Black Box stage several times, and has been first-rate all the way. She's accomplished at directing, too, and her skills here with actors and composition are formidable. (At one point, without giving anything away, a literal metamorphosis transpires, accomplished with some simple but very effective stagecraft. I love this kind of thing; it is, I think, the essence of theatre.) Black Box co-founder David Miller is frequently a lighting designer, as he is for I & You, but in the productions I've seen, he hasn't previously had the chance to prove his chops as does in this play, performing a dazzling "drum solo" for the eyes.

Gunderson has written more than 20 full-length plays, including the wonderful Silent Sky, which the Black Box Theatre presented in 2019. I & You, however, is different from that work in every way except the most important ones – both are funny, smart, moving, and captivating. The venue's latest presentation is a stunning experience, in both senses of that word. After you leave the theatre, watch for traffic if you're crossing the street. You'll likely be thunderstruck.

I & You runs at the Black Box Theatre (1623 Fifth Avenue, Moline IL) through July 24, and more information and tickets are available by calling (563)284-2350 and visiting TheBlackBoxTheatre.com.