False Profits: Quad City Music Guild's "Catch Me If You Can," at the Prospect Park Auditorium through March 25 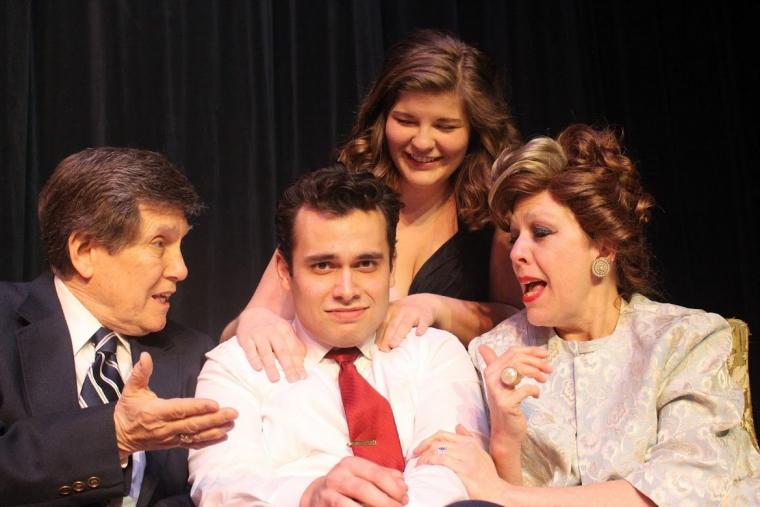 Steve Trainor, Adam Sanders, Sydney Dexter, and Jackie Patterson in Catch Me If You Can

“One day you’ll look at yourself and you won’t be who you were.”

Ladies and gentlemen, that is foreshadowing in Catch Me If You Can – but there are more than simple plot devices in director Michael Turczynski’s staging that runs this weekend at Quad City Music Guild's Prospect Park Auditorium.

Based on the movie of the same name, Catch Me If You Can is the musical adaptation of Frank Abagnale Jr.’s (Adam Sanders) life spent impersonating a pilot, doctor, and lawyer while also becoming a skilled forger. Not to be outwitted, however, is FBI agent Carl Hanratty (Tim Dominicus), who has made it his mission to be hot on Frank’s trail.

Frank Jr. idolizes his father Frank Sr. (Brant Peitersen), and solving his father’s problems becomes the motivation for his crime spree. Sanders and Peitersen work well together, their duet “Butter Outta Cream” a heartfelt shift of power as the student becomes the master. And Sanders is an outstanding lead, embodying both the youth of a 16-year-old and the maturity necessary to be a smooth talker who can somehow pull a fast one over anyone he meets. The actor steals the show along with Frank Jr.'s pilfered millions of dollars. 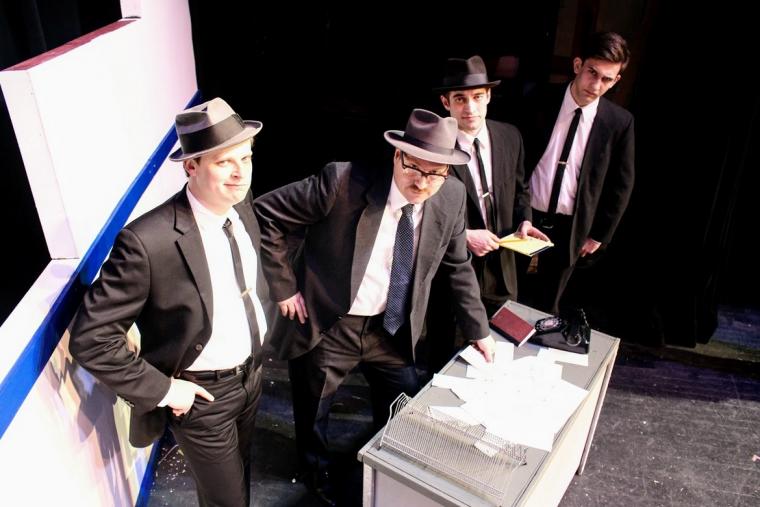 Not to be outdone by his “teenage” counterpart, Dominicus’ portrayal of Carl was sheer goodness. Dominicus was so genuine that in “Hanratty’s Reprise,” I wanted to yell at him: “Stop feeling sorry for Frank Jr. and do your job!” But the fun for Frank Jr. lies in the chase and the relationship he builds with Carl, as he has no one else in his life who knows the real man behind the curtain.

As the fun wears off for Frank Jr. in the second act, he tries to settle down with nurse Brenda Strong (Sydney Dexter). But when, during Tuesday's preview performance, the happy couple traveled to New Orleans to meet her parents, and we sensed that Frank Jr. was supposed to be nervous, Jackie Patterson’s Carol and Steve Trainor’s Roger were too darn likable to warrant nerves. Southern charm oozed from Patterson, and even Trainor’s stern look had a twinkle about it. [Happily, the television sing-a-long turned production number “(Our) Family Tree” brought energy to an otherwise overly calm second act.]

After Frank Jr.'s jig is up, Dexter performs the Southern-belle ballad “Fly, Fly Away” complete with her very own gospel choir, and the song is a lovely testament to the musical talent this production has at its disposal. Music director Mason Moss did his job well, the cast sounded wonderful, the pit orchestra played great, and as he was on stage for the whole show, I have to tell you: Moss looked like he was having a blast – and it was only a dress rehearsal.

Turczynski should be applauded for his creative use of the space designed for him by Andy Sederquist, who created a multi-level set that switched from airport to hospital to homestead with ease. The platforms were highlighted by rope lights that could turn seemingly any color they wanted, with the upper level featuring a sparkly blue border that just screamed '60s television. 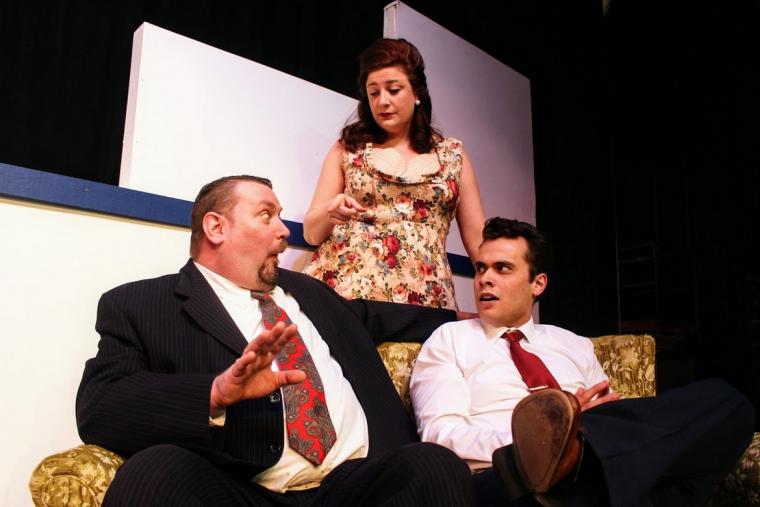 John Erb’s lighting design, however, was having a rough go of it on Tuesday. Actors who found themselves downstage were often in shadow, and there were a lot of what I presumed were light-cue mistakes, as I wouldn’t expect a scene to be played in darkness while another stage area was lit. The microphones were also causing some trouble; cast members were oftentimes either so loud that they sounded screechy, or you could just faintly make them out over the orchestra. (This was especially a shame during the song “Don’t Be a Stranger,” because when I could hear Jess Fah’s Paula Abagnale sing, it was lovely.) Hopefully, though, these lighting and sound elements will be sorted out by Thursday’s opening.

Music Guild's Catch Me If You Can featured a 14-member ensemble, most of whom, thanks to talented costume designer Bailey Hager, never appear on-stage in the same outfit more than once; without its chorus of nurses, FBI agents, and a glue bottle, this show wouldn’t be half as exciting. Choreographer Shana Kulhavy also had the performers grooving with her odes to '60s dance steps, and Adam Cerny and Sara Laufer were especially eye-catching as they ponied and shimmied like they were actually from the era. Everywhere you looked, the ensemble kept the production lively in numbers ranging from the high-spirited “Live in Living Color” to the more sultry “Doctor’s Orders.”

As you can guess, Frank Jr., by the show's end, winds up completely changed from the boy he was at its beginning (because foreshadowing), and in his swan song “Goodbye,” Sanders gave so much to the moment that it was a shame the script didn’t allow him a big number before the musical's last five minutes! But from the pre-flight – I mean, pre-show – announcements to the curtain call, Tuesday's production was just plain fun. And provided the issues with the lights and sound are sorted out by Thursday's opening night, you'll have to – forgive me for this … – catch it if you can.

Catch Me If You Can runs at the Prospect Park Auditorium (1584 34th Avenue, Moline) through March 25, and more information and tickets are available by calling (309)763-6610 or visiting QCMusicGuild.com.