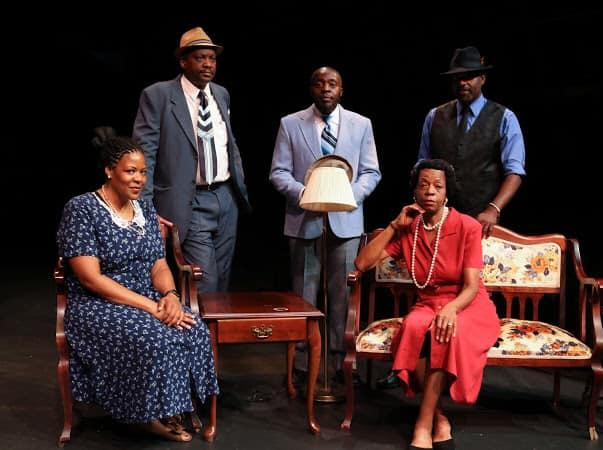 Family history can often be synonymous with family drama. And anyone who has ever argued over ownership of a family heirloom with their sibling will probably appreciate the Playcrafters Barn Theatre's current production.

Winner of the 1990 Pulitzer Prize, August Wilson's script for The Piano Lesson is a stunning look at a family’s legacy, and how it’s ingrained in a musical instrument. The famed piano, engraved by the Charles family’s great-grandfather and depicting images of their enslaved ancestors so they wouldn’t be forgotten, becomes the center of attention. Boy Willie (played here by a brash Dante Turner) has just arrived in Pittsburgh, having traveled from Mississippi to earn enough money to buy some land; he's there, specifically, because he would like to sell the heirloom piano currently housed by his sister Berniece (the passionate Alisha Hanes). But she flat-out refuses – to Berniece, it’s a symbol of suffering and pain and she cherishes it, as well as the Charles legacy.

What Playcrafters’ production, on Friday, lacked in polish was largely made up for with passion. As the lights dimmed and director Kermit Thomas welcomed us to the opening-night performance, he seemed to exude joy and excitement in sharing his long-overdue presentation. (The Piano Lesson was initially meant for the 2020 season and, after more than a year of pandemic-caused delays and a nearly complete cast overhaul, it’s no wonder Thomas appeared thrilled to finally get the show on stage.) Thomas also made the interesting choice to read the opening stage directions, bringing us into the world of mid-1930s Pittsburgh and, while I wish he would have added a note about keeping cell phones put away (their use was frustratingly rampant throughout the evening), I did enjoy being swept into the action by hearing exactly how playwright August Wilson envisioned it. 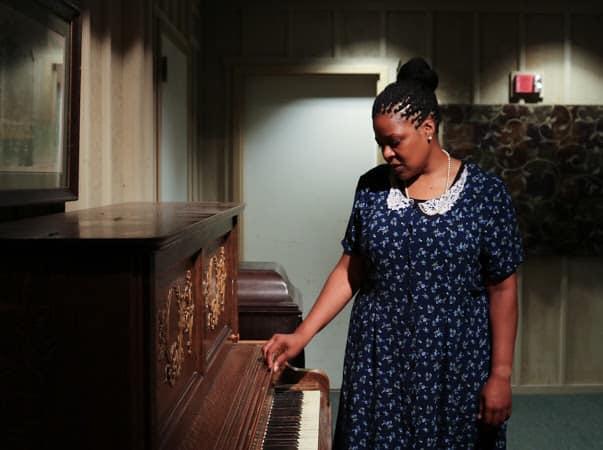 The head of the family, and owner of the home in which The Piano Lesson is set, is Doaker, played by an even-keeled Fred Harris Jr. Harris is masterful at remaining in control and guiding the stage action; his Doaker is a real treat to watch. Wilson wrote a strong character who drops wisdom and punchlines like a flower girl drops petals, and Harris tackles the role with ease. In a battle of wills between sister and brother, Doaker is the steady peacemaker the family needs. The other great moments of peace come when Berniece’s young daughter Maretha (the sweet-as-pie Kennedi Durant) is around. In the midst of frequent Boy Willie and Berniece drama, this production isn’t without some comedy, the best example of which was when Antonio Stone’s Wining Boy sold Lymon (earnestly played by Ashley Harris) a “magic suit,” complete with shoes that didn’t quite fit.

Opening night was not without some mishaps. It felt, to me at least, that the cast was a little nervous; there were occasions in which it felt as though actors were almost lost in the story and forgot what to say next. There was also the curious incident of the dog that wandered on stage, just as calm as could be. The men of the cast, thank goodness, kept going so well that I later checked my copy of the script to see whether there was a dog in the cast. (Why couldn’t the Charles family have a dog if they wanted one?) Once the pooch wandered off Playcrafters’ thrust stage – luckily, almost directly into the waiting arms of Thomas – the furry interloper was escorted out. However, the canine thespian did reappear during the curtain call … which I appreciated. 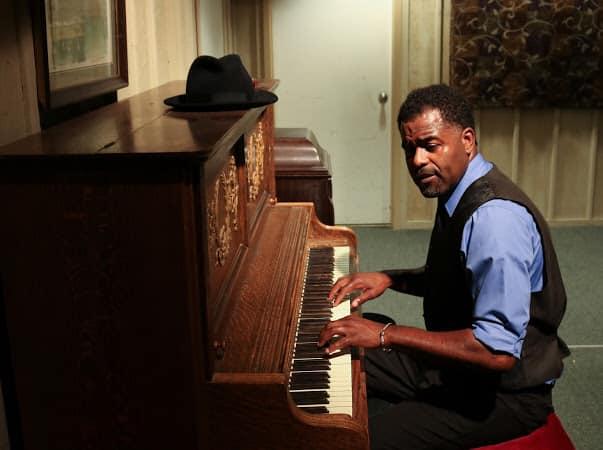 From a technical perspective, Eric Teeter’s sound design wasn’t one of my favorites. I gathered that when (Spoiler Alert!) Boy Willie attempts to move the piano, the sound we consequently hear is meant to represent the ghost of Sutter, the former landowner who enslaved Charles’ family members generations ago and now haunts the household and the piano. The first few times I heard this particular sound effect, though, I was thoroughly confused, and didn’t fully figure out its meaning until a few minutes before the show ended, when Renaud Hayman’s Avery, the play's wannabe-preacher, was throwing holy water around like a sprinkler.

Canine and sound surprises aside, Thomas’ production is otherwise fairly straightforward, and while the men of the show make up the bulk of its action, it's the women who steal the spotlight. Durant’s smiling face makes any scene more uplifting; Hanes offers several powerful monologues that had me at least convinced the piano should stay put. And rounding out the trio was Shawn Bolton’s Grace. (The second weekend’s performances will find LuAnne Sisk in the role). Grace, like Berniece, wasn’t about to deal with any nonsense, and thanks to Bolton’s strong performance, I got the feeling the two women had more in common than they let on.

While Playcrafters’ version of The Piano Lesson may not hit every right note, the commitment to telling Wilson’s powerful story is commendable. Hopefully, with the first weekend now under their belts, the cast can shake off any remaining nerves and deliver a well-tuned, harmonious performance.

The Piano Lesson runs at the Playcrafters Barn Theatre (4950 35th Avenue, Moline IL) through July 18, and more information and tickets are available by calling (309)762-0330 and visiting Playcrafters.com.