Fancy/Pool/Costume-Party Animals: “Elephant & Piggie's 'We Are in a Play!,'” at the Circa '21 Dinner Playhouse through July 2 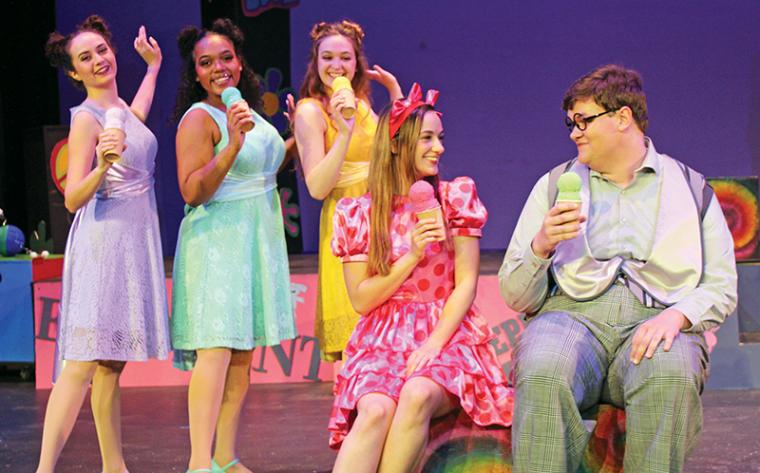 Did you hear the energetic trumpeting coming from Rock Island this past weekend? Because Elephant & Piggie’s “We Are in a Play!” debuted on the Circa ‘21 Dinner Playhouse stage and was chock full of trumpets, both of the elephantine and brass-instrumental variety. Director Kim Kurtenbach kept the energy in this production high and the overall experience was a joy – a veritable celebration of friendship.

The beloved, timid Elephant Gerald (T.J. Green) and charming, outgoing Piggie (Erica Lee Bigelow), who are the “bestus best friends,” star in a 25-book series by Mo Willems, six of which were adapted for the stage by the author himself with a little musical help from Deborah Wicks La Pluma. The delight here is that Willems’ lively musical feels exactly like the books you’ve come to love and appreciate. I should note that my family considers ourselves to be Mo Willems super-fans, so we had high expectations for this production, and were not disappointed.

Green was an inspired choice for Gerald. His sheer physical size was a force on stage as he towered over the rest of the cast as an elephant should, really. Gerald’s character is one of my favorites to read out loud to my own kids, as he is reactionary and dramatic, and it would have been easy to veer towards ridiculous. But Green never overdid it. (Okay, with the exception of his song “Don’t Go,” in which ridiculousness couldn’t have been avoided.) Green’s exuberant counterpart Bigelow was wonderful; she was zippy, zappy, and spunky. Truly, Bigelow’s Piggy was spot-on hammy (ahem), making her polka-dotted dress that designer Gregory Hiatt created all the more perfect. But while Hiatt’s costumes were bright and cheerful, I was disappointed by the lack of elephant ears. I assume Green’s big flappy lapels were meant as stand-ins, and while it wouldn’t have been my first choice, I didn’t hear a whole bunch of kids complaining about Gerald’s lack of ears, either. 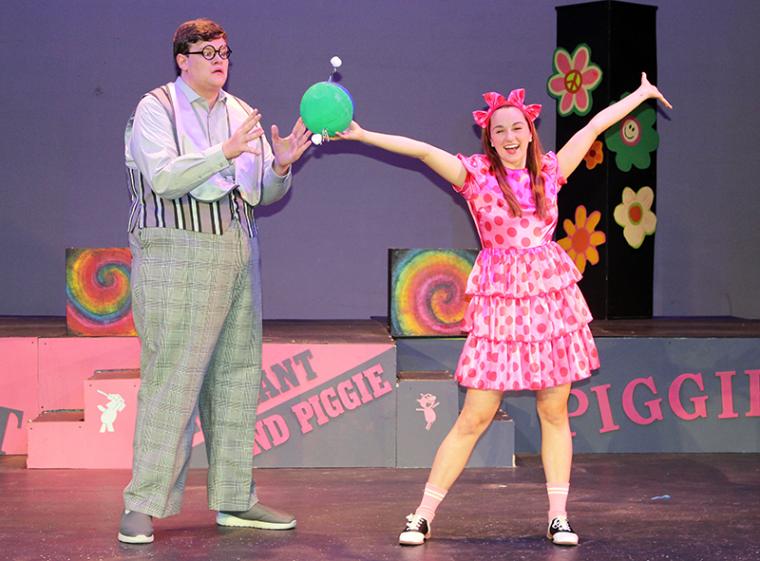 Assisting Gerald and Piggie on stage are the Squirelles: a trio of singing ladies providing the backup and additional help our main characters needed. In these roles, Ellie Larson, Savannah Bay Strandin, and Kira Rangel were delightful. I was especially a fan of Rangel’s cameo as the Ice Cream Penguin, but the crew as a whole was great, with the Squirrelles especially shining on “Swimmy, Fancy” and “Toy Breaker.” Music Director Bobby Becher did a bang-up job getting the talented fivesome in this cast ready to rock the music, while choreographer Brooke Myers had the fun job of preparing the cast to dance their socks off, which they did with gusto. The larger production numbers (can you call a song with five people in it a production number?) were typically more engaging than the duets between Gerald and Piggie, but luckily, more often than not, the whole cast was around whenever the music played.

Audience participation on Saturday afternoon, however, was lacking. I’m not sure anyone was actually clapping during the Clap/Banana/Flippy-Floppy-Floory face-off … which I promise makes sense in the context of the show. The cast was certainly encouraging, but considering some younger patrons weren’t old enough to enjoy any pre-pandemic theatre (or may not recall it, anyhow) it might be worth adding a “Participation is a good thing!” note to the pre-show announcements.

You’ve got to hand it to Circa '21 for choosing a children’s show that so perfectly matches up with the theatre's mainstage production Beehive: The '60s Musical, given that the two largely share a set. Kurtenbach and designer Mike Turcynski added a few recognizable Elephant & Piggie touches. but it was largely a blank stage – which was perfect, as the books don’t take on any particular locations, opting instead for white space behind the illustrations. Why build a complicated set when it isn’t necessary? 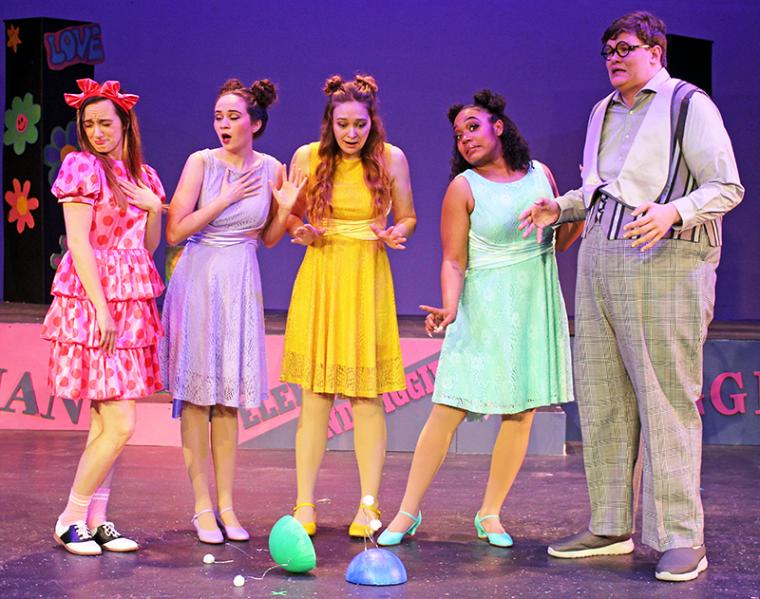 While “We Are in a Play!” stories closely follow the books, my kids were quick to pick out the differences between the stage action and their literary counterparts. The production’s one low point, for them, came with Piggie’s brand-new toy that she loves. The newfangled contraption is meant to snap … but alas, no snapping was seen or heard. (Admittedly, I’m being picky, but it is a key plot point.) But Kendall McKasson had a ton to do as the stage manager plus lighting and properties designer, and her brilliant ice cream cones that perfectly coordinated with Hiatt’s costumes – and even magically melted without getting anyone sticky – nearly make up for the lack of snap.

At the hour-long production’s end, I found myself tearing up as we said goodbye to Piggie and Gerald. Was it because Bigelow and Green were so endearing? Was I sentimental about finally getting to see this show? Could it be because seeing families enjoying theatre together again filled my heart with happiness? Let’s go with all of the above, and I hope you plan to go to Elephant & Piggie's “We Are in a Play!”, too, and appreciate it for yourself. Whether you’ve read the books or these special characters are brand-new to you, you’re guaranteed to end up loving Elephant and Piggie.