The Farmer and the Copland Should Be Friends: "The Tender Land" at Lincoln Park through June 19 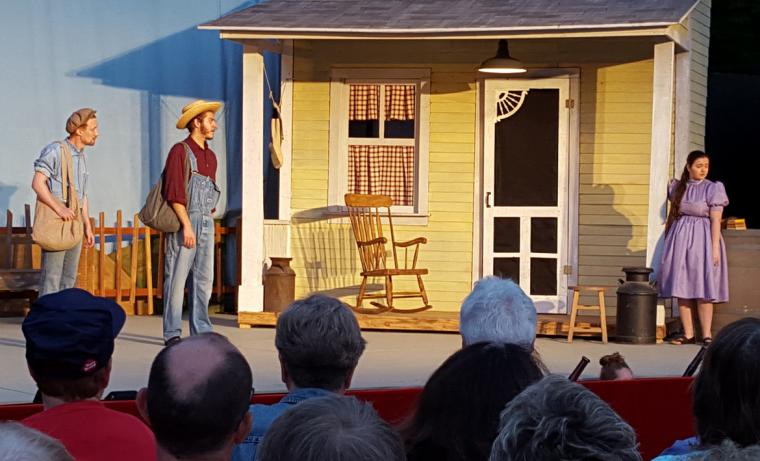 It's 86 degrees on a humid Saturday evening in June, and sitting in Rock Island's Lincoln Park, it's easy to reflect upon a gold and pink summer sun setting in the west. To the south, the lights have just clicked on the basketball courts as a neighborhood pick-up game is in full swing. To the north, a young couple push their giggling toddler on the swings of the playground. And to the east, the lights are dimming on the Italian-Renaissance-inspired structure enveloped in the arms of the giant oaks as another evening of theatre in the park is set to begin.

Genesius Guild and Opera @ Augustana continue their annual partnership of staging opera in Lincoln Park with their current production of Aaron Copland's The Tender Land. With music by Copland and libretto by Horace Everett, this presentation is set in the American heartland during the Depression and concerns the Moss family farm, beginning just prior to the graduation of the family's oldest daughter Laurie (Madeline Bawden). News arrives to Ma Moss (Anita Cook) that two suspicious drifters have been seen in the area and that it would be wise for her to a keep close watch on the family. Before long, these drifters, Top and Martin (Alexander Toth and Erik Wilson), arrive on the scene looking for work and food, and hope to gain the attentions of Laurie. Family patriarch Grandpa (Nathan Windt) consequently hires the men and invites them to the graduation party where Martin and Laurie will eventually fall in love and make plans to run away. Although Saturday's Tender Land started a little slow for me, it gained momentum with the entrances of Wilson and Toth, who drove the energy of the production way up. Toth displays natural comedic talent in Top's physicality and does a nice job of incorporating an "Aw, shucks" dialect into his singing. Wilson, meanwhile, brought to mind an earnest do-gooder in his portrayal of Martin, and his tenor voice provided some of the most pure and interpretive vocals of the evening. Neither actor brought a sense of suspicion to his drifter character, but both were able to charm the audience as quickly as they did the Moss family.

At the center of the story, Bawden's portrayal of Laurie was virtuous yet restless. She clearly interpreted the character as wanting to break away from her mother and grandfather to experience the world beyond their farm, and Bawden's soprano was lovely and strong throughout the nearly two-hour performance.

Windt does a fine job as a man trying to protect his family while naïvely getting involved with two outsiders. It would appear this is not Windt's first opera, as he is very comfortable in the medium. However, I do have one makeup note: In its attempt to make the performer appear older, the white greasepaint that colored in Windt's five o'clock shadow made him appear mime-like, as opposed to resembling a graying grandfather. Cook's portrayal of Ma is that of a loving helicopter parent, as opposed to a controlling Mommie Dearest, and while I'm not sure how the role is written, I much prefer Cook's interpretation to a more domineering version. Her alto is deep and soulful at times, and our ability to feel Ma's heartbreak at the production's climax is a testament to Cook's performance.

Special recognition must be also made of the production's professional orchestra and its conductor Brian Dollinger. Copland's soaring Americana melodies sweep over central Rock Island like the stunning purple twilight of the evening due to the dynamic and rich performances of Dollinger and his team.

There are so many activities and performances to see throughout the Quad City area on any given weekend, and yet few fill the senses like sitting in the open air of one of the most beautiful parks in the region. If you have never experienced a Genesius Guild production, or never knew that opera was performed under Lincoln Park's grand oaks on a summer evening, then The Tender Land may very well satisfy you in a way like nothing else this season.