Femmes Fatalities: “The Revolutionists,” at the Black Box Theatre through March 12 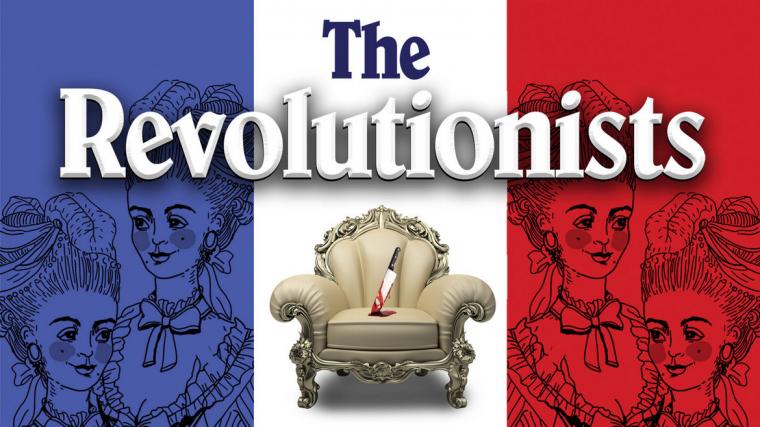 Seeing a play by Lauren Gunderson at the Black Box Theatre is now one of my favorite pastimes. On Thursday, I attended the opening-night performance of Gunderson's The Revolutionists, and my third go-'round with this playwright and this theatre proves that they harmonize as deliciously as Brie and a baguette.

The play was developed at the Bay Area Playwrights' Festival in 2015, debuted at Cincinnati Playhouse in the Park in 2016, and depicts four real women in Paris during the French Revolution's Reign of Terror. Anyone, from peasant to king, could be – and was – killed for whatever the state considered treason. Don't be put off by this grim setting, however; this show is comedic and inspiring at its heart, and is nothing close to a historical reenactment. Given the pop-art-inspired promotional graphic for the Black Box's production – a candy-colored portrait of a woman in a ruff and shades – I was apprehensive that the staging would be ironically kitschy, as in the cringey 2006 film Marie Antoinette. I should have realized that director Patti Flaherty, with her savvy and wealth of theatre experience, knows better.

The superb Kayla Jo Pulliam Mendoza, as playwright Olympe de Gouges, is authentic and endearing, opening the show with her character agonizing over her current project. Olympe concocts ideas, runs with them, then talks herself out of them in an amusing rush. (This was eminently resonant with me, both as a writer and a theatre buff.) Mendoza has trod these particular boards often, and directed Gunderson's I & You at the Black Box last year. Now, and as always, she astonishes with her subtle, ever-changing facial expressions and body language.

Olympe's friend Marianne Angelle, portrayed by Cynthia Johnson Lomas, drops in unexpectedly, wanting Olympe to write an inspiring pamphlet for the cause. Lomas' Marianne is fundamentally warm and calm, a bastion of reason, yet fervent about the task she's taken on. She has suffered perhaps more than any other character, but she's a rock, and I'd want her on my side in any battle. Lomas starred as the theatre's Billie Holiday in Lady Day at Emerson’s Bar & Grill in 2019, and although she perhaps hasn't had as much stage experience as Mendoza, you'd never guess it.

Then an even more unexpected Revolutionists visitor drops by: young assassin Charlotte Corday, played by Alice Jane. And yes, she's entirely upfront about her plans, as she holds pamphleteer Jean-Paul Marat responsible for inciting the bloodshed. (You may remember Marat – I did, anyway – as a dead guy in a bathtub in that one painting. Charlotte is who put him there.) I saw Jane as Henrietta Leavitt in Gunderson's Silent Sky at the Black Box in 2019, portraying another real, albeit very different, history-changing woman. Here, Jane admirably exhibits Charlotte's zeal, which is tinged at times with hints of youthful (and amusing) uncertainty. Charlotte knows she'll be executed for her deed and wants Oympe to concoct her exit line, and Jane's every word and move is a pleasure (and Jane's French pronunciation kills).

Finally, the most unexpected of all unexpected guests enters – fashionably late, and soon to be the late former queen Marie Antoinette, played by Lora Adams. (Adams is a favorite for the title "the hardest-working woman in show business" – she's the theatre's co-founder, co-owner, and artistic director.) Her Marie is frivolous, self obsessed, and silly, fussing with her basket of ribbons. But though I felt I should hate her, I couldn't. She is what circumstances made her: privileged and spoiled. However, Marie has other facets, and Adams eventually reveals her humanity. She's ridiculous, hilarious, and touching. She, too, wants Olympe to come up with final words for her. (This is perhaps the most outlandish of all of The Revolutionists' plot points – that three people would hire a struggling writer on the same day.)

Adams is costumer, and befitting her role, Marie has the French-iest and most out-there outfit of all, featuring a towering wig and an ornate dress with enormous panniers – squarish hip-exaggerating underthings that could hold three beers on each side. Charlotte wears a dashing ensemble with practical trousers for a quick getaway; Marianne is draped with a dignified dress, headwrap, and patriotic sash; and Olympe sports an attractive, no-frills frock with a bit of a bustle. Despite the deliberate anachronisms central to the script, I'm glad Adams chose historical wear. The set, which she designed, is likewise non-contemporary. Constructed by Michael Kopriva and painted by Tom Vaccaro and Trinity Filut, it exploits the wide stage, accommodating scene changes without actually having to change scenery. The central portion contains visual echoes of the threat literally hanging over everyone's heads: the guillotine. Built by Julien Blaine, it's simple in form, yet menacing.

Gunderson's script doesn't just skew reality by taking liberties with history, but also by playing with the conventions of storytelling, including several winks to theatre fans. Olympe and all the other characters, and actors, and you, are writing themselves into history through their actions, for good or ill. Seeing the Black Box Theatre's The Revolutionists should be part of your story.

The Revolutionists runs at the Black Box Theatre (1623 Fifth Avenue, Moline IL) through March 12, and more information and tickets are available by calling (563)284-2350 and visiting The BlackBoxTheatre.com.