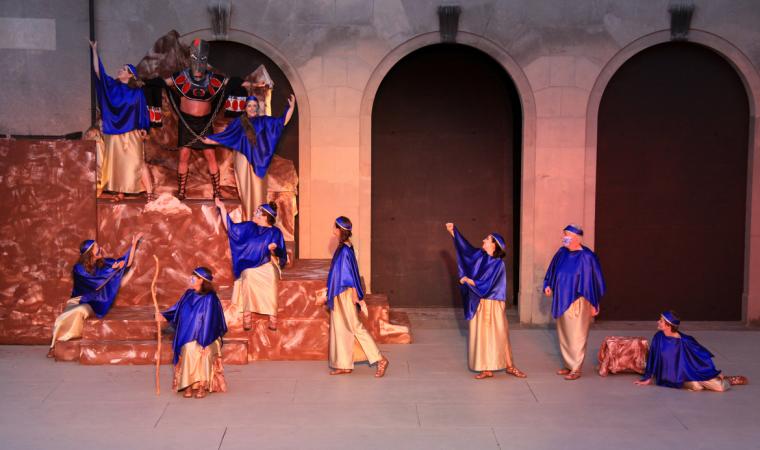 Heat-advisory warning notwithstanding, Genesius Guild's staging of Prometheus Bound in Rock Island’s Lincoln Park was an experience not to be missed. As with most Greek tragedies, there is a moral dilemma that can give audiences insight into their lives, and director Michael Callahan staged a meaningful production that remains relevant 2,500 years after it was was written. (Who would have guessed we’d still be battling tyrants?)

The first part of Aeschylus’ trilogy, Prometheus Bound is based on the myth of the Titan Prometheus who introduced fire to mortals in defiance of Zeus. In doing so, the enraged Zeus ordered Prometheus tied to a mountaintop boulder as punishment. With Prometheus chained to his rock, others visit him to discuss his situation and offer advice.

The sound of drums, courtesy of Matthew Callahan, sets the tone for the evening as we met our players. Starting with the Choragos (Kathy Calder), who leads the chorus, the cast crossed the stage, introducing themselves to us as they collected their labeled masks (if they had one). The masks matched the color scheme of their characters' costumes (designed by Ellen Dixon), which was helpful to avoid confusion about who was who and allowed the audience the enjoyment of predicting which mask would be grabbed. Those at Genesius Guild are proud of their strong history of performing classical Greek theater with traditional masks, the ones in Prometheus Bound designed by Brent Metcalf and Daityn Duffy, and constructed by Bob Hanske and Duffy. I, however, did worry about how well the characters would be heard given their masks and distance from the audience – but for the most part, the actors were quite skilled at projecting over the outdoor ambient noises. (Among them, with Independence Day looming, more than a few explosions.) 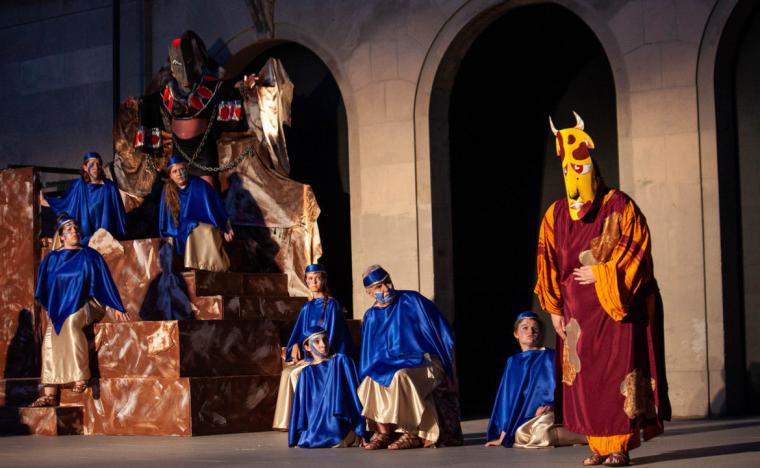 George Cornelius was the last to cross the stage, and when he saw the mask that remained was that of Prometheus, he seemed almost startled, and paused before accepting the fact he was going to become our titular character. But that hesitation was powerful staging, and not indicative of Cornelius' ability to enact Prometheus, a figure who, we quickly learn, has no remorse for giving fire to humans and proclaiming that he “gave them hope.” It was not lost on me, regarding who could be louder, that Cornelius was battling humans in the neighborhood of Lincoln Park who were shooting off fireworks throughout the run of the show. (A battle, I'm happy to say, more often won by Cornelius!)

The all-female Greek chorus representing humanity, as director Callahan explained pre-show, featured the night's only unmasked characters, and as a cohesive unit of eight, they are very strong. (There were a few times when one or two voices were quieter than others', but their collective message was always understood.) Sitting on different levels so as to frame Prometheus, their blue costumes seemed to pop against the brown of the stage – a setting wisely kept simple by designer Kathryn Wherry. When Ocean (John Wright) appeared, three members of the chorus surrounded him with beautiful flags, one side featuring a sea monster when held out wide in a line, and the other side with waves. The straightforward spectacle was eye-catching, and might have distracted from Ocean and Prometheus discussing their friendship and loyalty, but the ladies were clearly directed when to have their flags stop moving to accentuate the points being made.

Liz Sager's Io, meanwhile, arrives in a horned mask, as she has been turned into a cow. Io and Prometheus understand the wrath of Zeus to a similar degree, so when Prometheus explains to her that her descendant will one day free him and their fates are intertwined, Sager was duly passionate, and the only actor who really connected with Cornelius on an emotional level. 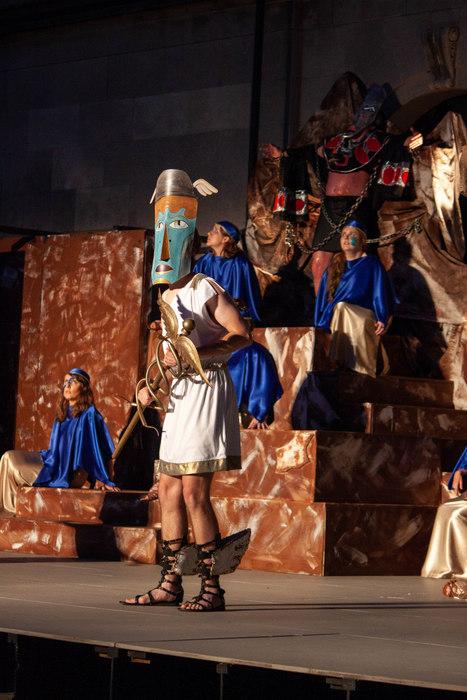 Andrew Calder looked every bit the part of Hemes in his winged masked, staff, and talaria (traditional-Greek winged shoes). Calder was the hardest to hear of all the named characters, which was a shame, because as the messenger of Zeus, he is trying to negotiate Prometheus’ release. But as a storm comes in, this one-act production draws to a swift end.

Lighting designer Andy Shearouse kept things simple and straight to the point, which really benefited this classical production, and there was something incredibly magical about the lights fading to black at the show’s close just as twilight had also faded into darkness in the park. Obviously, not all shows can be quite so well-timed, but this production hit that sweet spot perfectly.

Prometheus Bound features no riddles and gives its morals straight-up, and there is sure to be a line or two that resonates with you in this succinct and strong presentation. Meanwhile, the enthusiasm of the Genesius Guild friends passing out “bug buttons” to patrons was mirrored by the show's performers, and ultimately. Director Callahan's production was a thought-provoking and entertaining way to spend a summer night in the open air – just as Greek theatre was meant to be enjoyed.