Fleet of Foot: The Mississippi Bend Players' “Dames at Sea,” at Augustana College through August 4 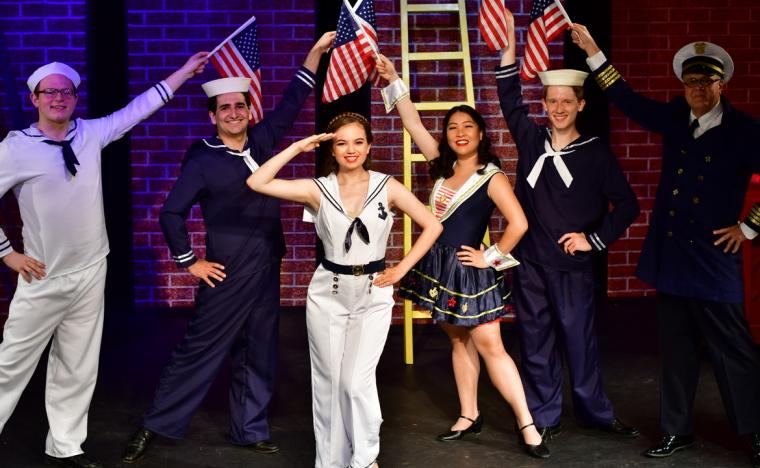 I was in Friday's opening-night audience for the Mississippi Bend Players' Dames at Sea. George Haimsohn and Robin Miller wrote the 1966 piece's book and lyrics, with music by Jim Wise, and as Augustana College's Brunner Theatre lobby display notes, it's a spoof of the films Gold Diggers of 1933, Footlight Parade, and 42nd Street. The old show-biz tropes it sends up are easy targets, and the tunes are imitative (naturally), but vastly enjoyable. As for the script, it's just one giant, cheerful wink in which continuity and plausibility are irrelevant. Show people playing show people putting on a show is a sea of fun to begin with, and the plot merely dips a toe in the water now and then, leaving the singing and dancing to make the big splash – which, here, they do.

Director/choreographer Shelley Cooper put together a lively, tap-tastic production that included ballet leaps and gymnastic feats. She and music director Saul Nache utilized their gifted cast and crew superbly throughout.

Scenic designer Susan Holgersson and lighting designer RaeEllen Walker also are the show's technical directors, and the nicely minimalist set allows for lots of dancing room. One ingenious low-tech effect comes during the Broadway-spectacle opening number. Instead of rigging special lights, two people are employed to shake glittery props, and the performers, in their lovely array of costumes by Christina Johnson, provide plenty of razzle-dazzle. I doff my hat to Johnson, who supplied a different ensemble for one actor's every scene (and doff it again to that actor, for the many costume changes).

I met sound designer Calvin Vo 10 years ago when we performed in another nostalgic maritime musical: Countryside Community Theatre's South Pacific. Conscientious actors should tackle other theatre responsibilities occasionally, and he did a fine job – but I do look forward to his next acting role. 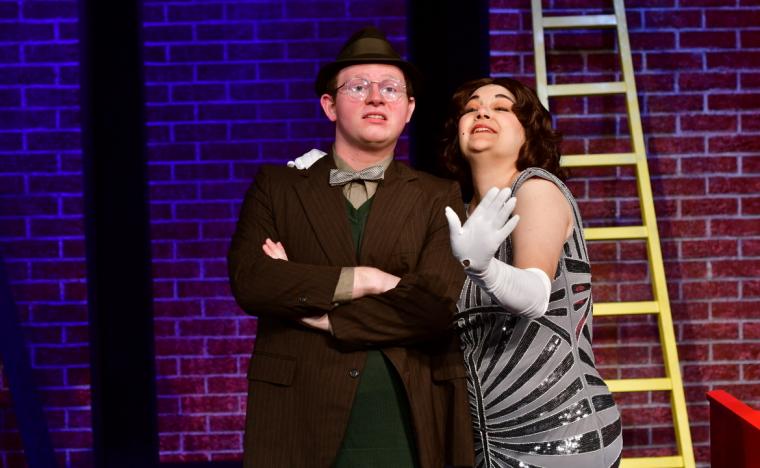 The dancing impressed me; you can't hide missteps with so few onstage (the Dames at Sea cast numbers all of seven) so close to the crowd. But the vocal blends enthralled me. I sang in an a cappella quartet once upon a time, and prefer a handful of precision singers in harmony to a big chorus, whose multiple voices can fuzz up the sound.

Christina Myatt, who is also MBP's company manager, plays Mona, the grande "dame" (in both the English and French senses of the term). Myatt's list of credits is longer than her character's, and I found her delightful. She's not just an administrator, folks; she performs with verve and great timing.

Her real-life daughter Anna Marie Myatt, as Ruby, does everything a naïve, ambitious tapper new to the Great White Way should, and she's got comic flair. However, in "Raining in My Heart," she adds no tongue-in-cheek overtones. Though there's humor in the staging, her rendition is sincerely sad, and it's refreshing amidst the wackiness. The younger Myatt is a high-school senior, and her talent, training, and already-impressive résumé add up to … . Well, let's just say I'm glad I won't go up against her at auditions. Ingénues, beware!

Speaking of the incredibly young and gifted, Lucas Thompson, who portrays the sailor/songwriter Dick, just graduated from high school, but performs like a pro. His nimble face dials the funny (and not-so-funny) lines up to hilarious. Thompson isn't just a comedian, however. His vocal and dancing prowess reveal that he's a major force, and I wish him many more roles in which to deploy it.

Mind Punyanuch-Pornsakulpaisal is the show-biz veteran Joan, and what a powerhouse voice, terpsichorean brilliance, and engaging presence she has! Her sparkle outshone all the literal glitter. She's off to Boston soon to work on her musical-theatre MFA. Catch her now while you can. 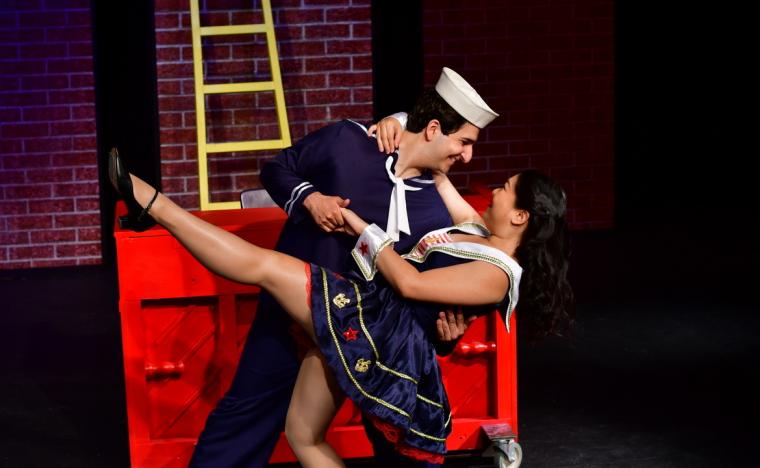 I was happy to see Rami Halabi again, as he took the lead on the Brunner stage this past spring in Augustana's How to Succeed in Business without Really Trying. Here he plays Lucky, another lovable semi-cad with an irresistible smile. His comedic takes and energetic singing and dancing captivated me.

Local-theatre lovers will recognize the versatile Doug Kutzli as the Naval captain, and whenever his name is in a program, I anticipate a pleasing performance. He brings all his skills to Mona and the Captain's passionate "The Beguine" – these two put the "naughty" in "nautical."

Noah Hill plays show-within-a-show director Hennesy, also serving as a company intern. He moves from training ground to proving ground with style, and matches more seasoned performers note for note, step for step. Hill's physical acting is especially entertaining. He's an Augie student (and was also in How to Succeed), and I hope to see him in more productions.

One bit during the "Singapore Sue" sequence did confuse me. (It's one of Dames at Sea's two "ethnic specialty" numbers, this one named after an actual 1932 short – remember, this is an homage to bygone entertainment.) Lucky sings to a goddess-like statue, but when Joan appears as Sue, the effigy remains onstage. It seems to represent a memory that becomes an active vision – therefore, both "Sues" being present puzzled me. Maybe Joan/Sue could've waved her hand to signal the crew to wheel off the prop. Or maybe it was a joke I just didn't get.

Experience the enchanting Dames at Sea. (And I'm not just saying that because MBP's producing artistic director Mike Schulz is also my editor.) It's an outstanding production, even in our theatre-rich area. I once thought that the profusion of shows would drain our well of performers and leave some directors dry. Turns out we have lots of talent to go around.

Dames at Sea runs at Augustana College's Brunner Theatre (3750 Seventh Avenue, Rock Island) through August 4, with discounted $10 admission for all active, reserve, and veteran members of the military and their families. For more information and tickets, call (309)794-7306 or visit MississippiBendPlayers.org.