Flop Suite: “The Producers,” at the Spotlight Theatre through October 9 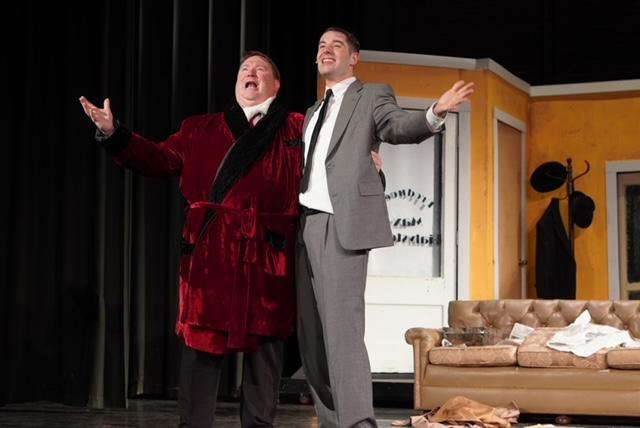 Christopher Tracy and Max Robnett in The Producers

On Saturday night, I had the great pleasure of introducing a friend to The Producers. Her only prior knowledge of the show was me incessantly singing “Springtime for Hitler” at her and my assurances that the musical was funny. And director and Spotlight Theatre co-owner owner Brent Tubbs and his talented cast of 29 held up their end of the bargain, offering a virtual – and visual – smorgasbord of humor.

Adapted by composer/lyricist/book writer Mel Brooks from his 1968 movie of the same name, The Producers follows legendary Broadway producer Max Bialystock (Christopher Tracy) and his accountant Leo Bloom (Max Robnett) as they determine they stand to make more money producing a flop than a hit. So they set out to do just that and produce the worst stage production they can imagine – a musical romp about the worst person they can imagine: Adolf Hitler.

Tracy and Robnett are a perfect pairing, and fans of the Producers movie will find themselves in good hands with these two. While each brings their own personal spin to the characters, they still channel a bit of their 1968 predecessors, as well. (Brooks' stage version was also turned into a 2005 film.) Tracy’s booming voice and even bigger personality took the lead and ran with it. Whether he was seducing little old ladies to make a buck running his scheme or just sitting on the couch in his office, Tracy fully commanded the stage, and made pure magic with the more meek and neurotic Robnett. Visually and vocally, these two are the yin to the other’s yang. Both Max and Leo take turns being the voice of reason, and when you throw in a Swedish bombshell named Ulla (the lovely Kirsten Sindelar) to ogle, everyone seems happy. 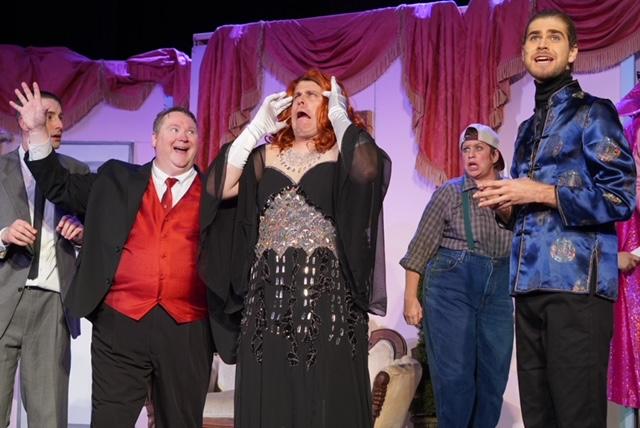 The show's other magnificent pair was Joel Kolander and Brycen Witt. Portraying hack director Roger Debris and his “common-law assistant” Carmen Ghia, these two are just as phenomenal as Tracy and Robnett, and drew deserved attention whenever they were on stage. When Max and Leo visit the Roger's home to woo him into directing their planned fiasco Springtime for Hitler, it was, for me at least, the first act’s highlight. Not only did it feature a delightful spectacle including surprise appearances by many a gay icon, but Kolander and Witt were wholeheartedly committed to the frolic. And they continued to sustain that incredible energy whenever they appeared on stage afterward; clearly, these two were living in the moment.

Let’s take a minute to shout out Sara Wegener’s and assistant designer Heather Blair's costumes, because they were truly perfect. If a gentleman was meant to look dapper, he did, and the fleet of senior-citizen ladies wore their house dresses and hats well. It was clear to me that the costumers took inspiration from the movie – with the German-pretzel bikini and headdress, for instance. But dare I say that Wegener and Blair pulled it off better? Not only did they create a costume that accented all the right assets, but they added a buxom body suit to accentuate the point. Throw in an assist from Becca Johnson’s talent with hair and makeup and Wegener and Blair just completely nailed it. Without their costumes, the Spotlight’s Producers wouldn’t have been half as good as it is. 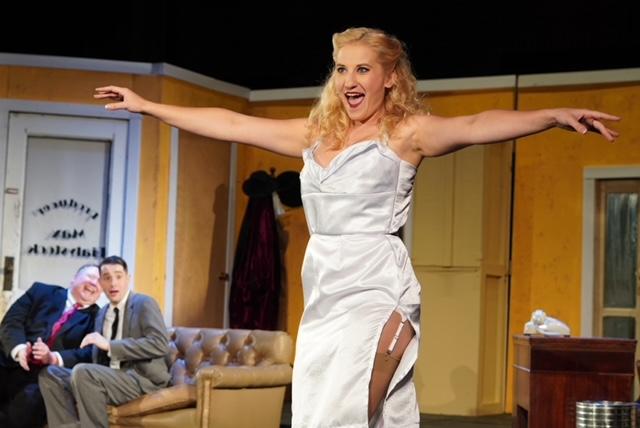 Also visually engaging were the great many scenic locations designed and lit by Tubbs, with Roger's house perhaps my favorite in its attention to detail. And as choreographed by Shana Kulhavy, the dancing and production numbers were nothing to sniff at. I especially loved the first act’s “I Want to Be a Producer,” and I dare you to be unhappy watching it.

This production has everything going for it – the talent, the costumes, a great script and set – but sadly, the show was plagued by sound woes. While the Spotlight space is one heck of a beautiful beast, the over- and under-amplification meant that bits of dialogue and lyrics were unfortunately missed more often than not. As written, The Producers is unbelievably funny, and on Saturday, I felt as though all the visual humor was hitting it out of the park. The verbal jokes, however, went soaring right over our heads, which was too bad. I'm glad that I knew what was going on in Brooks' script before I entered the theatre, but my friend was confused from time to time, simply because it was audibly difficult to make out what was voiced. She got the gist of it, certainly, but there was so much more laughter to be had. (The fact that some characters had accents didn’t help.) At least it's difficult to blame the orchestra, given that all 11 of music director Chad Schmertmann's musicians sounded great, and I appreciated they were positioned above and behind the audience because it gave the space a truly full sound.

But the truth is that even if you only sort of know what’s going on, it won’t matter a ton if you can’t decipher every word. Would stronger audibility make the show so much better and probably one of the best this area has ever seen? Heck yes. But The Producers is still in gifted hands. Get your tickets while you can, as this show is definitely not a flop.

The Producers runs at the Spotlight Theatre (1800 Seventh Avenue, Moline IL) through October 9, and more information and tickets are available by calling (309)912-7647 and visiting TheSpotlightTheatreQC.com.