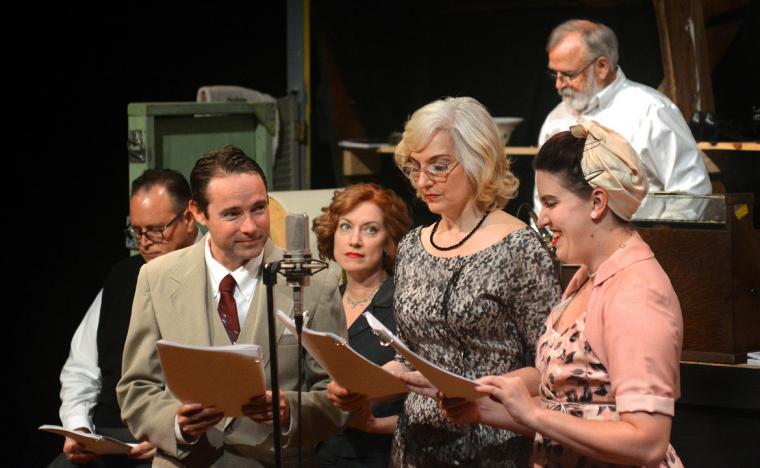 Geneseo's Richmond Hill Barn Theatre is currently presenting Vintage Hitchcock: A Live Radio Play, adapted by Joe Landry – another production canceled due to COVID, then rescheduled, with most of the original cast intact. It's a tasty helping of suspense and murder, with a sprinkling of humor.

I saw – and heard – the show on Thursday's opening night, and it depicts a 1940s broadcast of adaptations of Alfred Hitchcock's early films The Lodger (ironically, a silent movie); Sabotage, which concerns mysterious bombings; and The 39 Steps, about a global conspiracy. (Landry has also turned other popular works into radio-style scripts; he's evidently found his niche.) I've never seen these Hitchcock flicks, but this was my third jaunt up those 39 Steps: the first at Richmond Hill in 2019; the second at Augustana College this past March. The Black Box Theatre and Playcrafters Barn Theatre has each presented versions of radio-Hitchcock in the past decade, Hitch's take was itself an adaptation ... and it's apparently going to be on Netflix! Clearly, it's a conspiracy.

While this production is helmed by master thespian and first-time director Jonathan Grafft, there's no room to list the dramatis personae, as each voice actor plays a multitude of characters. The ever-delightful Mike Kelly juggles his roles (his largest is Mr. Sleuth in "The Lodger") as deftly as he did playing his truckload of parts in Richmond Hill's The 39 Steps three years ago. Along with performing, Larry Lord serves as the station's announcer, and is also its sound designer – an especially vital function here. His real-life wife Lorrie Lord's big role is as Winnie in "Sabotage," and she entertainingly switches among cordial, flirty, and terrified. 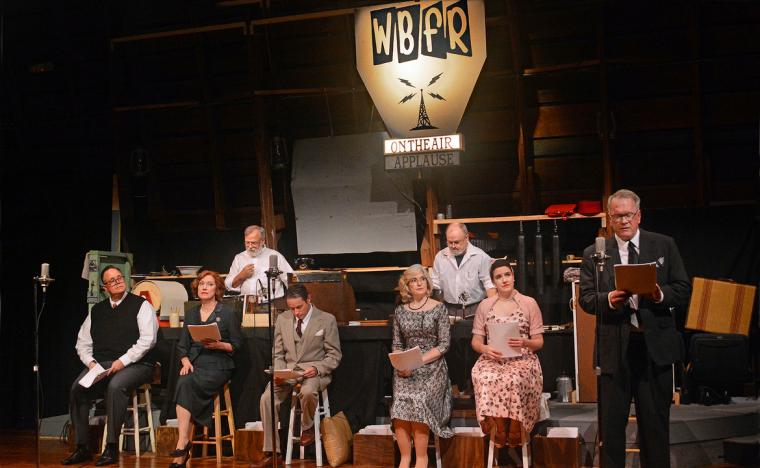 Greg O'Neill's primary role is the bewildered Hannay in "The 39 Steps,” the role Grafft played in 2019. I enjoyed O'Neill as one of the school-board quartet in The Music Man at Countryside Community Theatre last summer. Unfortunately, he doesn't have a chance to croon in this show. Fortunately, though, Elizabeth Shaffer, Leigh VanWinkle, and Lorrie Lord come to the musical rescue, singing jingles during commercial breaks. They, plus announcer Lord, bring plenty of Hitchcock references to the snickering fore with the aid of composer Bob Manasco, a frequent area music director. VanWinkle's roles include Mrs. Bunting in "The Lodger," while Shaffer plays her daughter Daisy. This pair conquer main parts in "The 39 Steps" as Annabella and Pamela, respectively, and the women also voice some boy characters, just as June Foray, Nancy Cartwright, and others have before them.

The actors employ various accents, including Russian, the American South, and Brits from high- to low-class. They also provide the walla: crowd sounds. They speak coherent words instead of going "walla walla," "rhubarb," or "peas and carrots" – those generic murmurs only work on stage. I mean, they are on stage, but they're on the radio … . Well, you know.

Sound helps bring any show alive, and Jim Skiles and Mike Skiles are Vintage Hitchcock's Foley artists, providing door knocks and squeaks, thunder, church bells, and more. (Jack Foley's method of providing ambient sound effects started in radio, and is still used in movies and TV. ) You'll likely smile at how they produce the flat crack of a gunshot and the "flump" of gas catching flame. You may also wince, as I did, when the plot required a body to tumble to the floor, as the sound was created by a body tumbling to the floor. I'm sure – well, I hope – he had padding. Meanwhile, a recorded track includes overblown period music fit for melodrama, so sound operator Dana Skiles also deserves kudos. 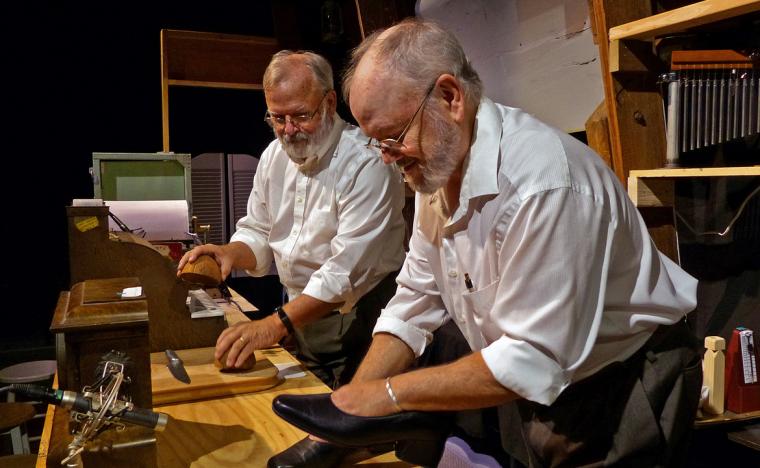 There's plenty to see at this radio show, too. The Foley guys are fun to watch, and the actors move from mic to mic. The ladies wear lovely retro ensembles, and the gents look fine, too (though men's clothing hasn't developed much in the last hundred years or so, as I've observed before). Costumer Ann Keeney-Grafft is also stage manager for both the fictional studio and the actual theatrical production. And while the multi-talented Brothers Skiles built the set, as they have many others, whomever designed and dressed the set (the program keeps that secret) did marvelous work. It's functional, as it includes the many sound-making props, but also carries the atmosphere of a bygone radio station and blends well with the theatre's rustic ambiance.

I was expecting some off-mic drama – squabbles and hijinks, as in the play Noises Off, or in the "Ham Radio" episode of Frasier. Here, the radio actors were simply pleasant colleagues. But then, what with three plots and shuffling more than 50 roles, there's already enough to keep straight. I was surprised that a few unscripted coughs passed unnoticed, when I thought the coughers should've muffled themselves, or at least been glared at by other performers. (Because they're on the air, you see.) Some loud walking and scraping of stools was also unfit for radio. Thankfully, however, it's actually theatre.

And being theatre, Vintage Hitchcock: A Live Radio Show needs light. So another hat tip to light operator Dana Skiles and lighting designer Jennifer Kingry. Hang on … . Kingry directed The 39 Steps here in 2019. And both Grafft and Kelly were in that, too. The 39 Steps really is a conspiracy!