Forsooth Sayers: “The Complete Works of William Shakespeare (abridged) [revised],” at the Spotlight Theatre through March 28 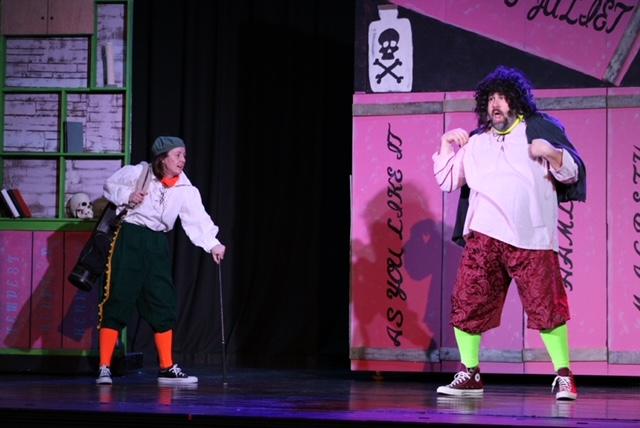 The Spotlight Theatre in downtown Moline is a versatile performance space, with seats lining three sides. Each row's elevation is steep, stadium style, and the ceiling is high, so you get an impression of vast grandeur, yet the moderate number of seats also gives it an intimate feel. The proscenium provides the audience with a traditional "framed" view of the show, yet there's also a large playing space on the floor in front of the stage, which becomes a thrust stage when the players venture onto it.

And such a venture it is – performing The Complete Works of William Shakespeare (abridged) [revised] by authors Daniel Singer, Adam Long, and Jess Winfield is a weighty task. Jeremy Mahr, Amelia Fischer, and Brent Tubbs play Jeremy, Amelia, and Brent, who in turn play multiple roles throughout Shakespeare's oeuvre.

Additionally, Tubbs was the show's director, as well as the set, sound, and lighting designer; he provided props, and he co-owns the dang theatre. You want more? He also directed and performed this script in the Quad Cities four years ago, as well as the abridged Bible and abridged Great Books shows (also with Mahr), toured with Reduced Shakespeare Company that originated these “abridged” works, and – the ultimate honor in drama - previously reviewed theatre for the River Cities' Reader.

Prior to this production of Complete Works, I'd had the pleasure of seeing Mahr and Tubbs perform. Fischer was new to me, but not to the stage. Each has a résumé as long as your leg. They play their actor-selves as being intimidated and ill-prepared in presenting these myriad synopses – but of course they're not, so there's some acting right out of the gate. Once their characters are committed to their (deliberately) poorly conceived ideas, the formerly shaky Shakespeareans are as enthusiastic and blustery as you could want, diving into their classic roles perhaps not wisely, but almost too well. With this premise and vast source material and these actors, this show can't not be fun, and it isn't. It isn't not fun. (Sorry. Over these theatre-free months, my writing's gone a bit rusty.) 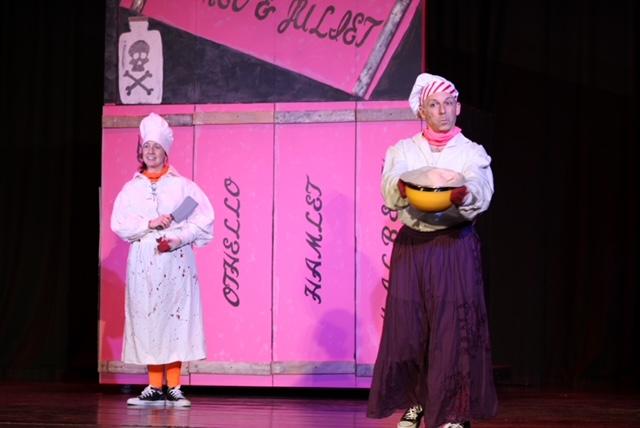 The trio's basic garb is breeches, high-top sneakers, and neon socks with matching masks. Sometimes the performers are distant enough from each other to pull down their masks to make neckerchiefs, and more importantly, reveal their bare faces – actors' crucial tools. Fights are funnier long distance, with the combatants six feet apart and reeling from blows that don't actually land. Tubbs has taken the dreary health precautions we've become inured to and turned them into comedic assets.

The cast makes running, jumping, tossing props, and whipping Alexis Lotspeich's costume pieces on and off look easier than these tasks actually are. There was also much murder and subsequent dropping dead – I particularly admired Tubbs' swoon to the floor, as Hamlets Gertrude, after her defiant poison-quaffing. Meanwhile, the action includes many intentional comedic goofs, and when some small things went awry – I think actually went awry, though I couldn't be sure whether such moments had been scripted – the subsequent ad libs (or “ad libs”) were amusing.

Complete Works' staff is as abbreviated as the cast and the script, with stage manager Adam Sanders rounding out the small crew by also running the show's lighting and sound. Going along with this theme, there were only about nine of us in the audience for Thursday's final dress rehearsal, but the cast got many laughs, and deservedly so. 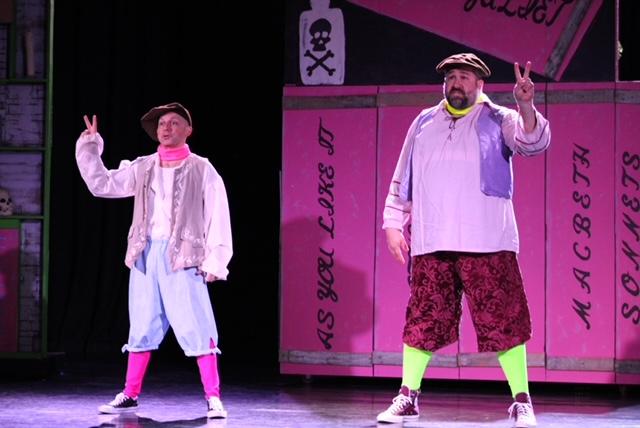 I have a degree in theatre, and even took a whole course on Shakespeare. So I'm possibly more savvy about Shakespeare than the typical person … though possibly less informed than the typical theatre person. But relax. You don't need any deep knowledge of Willie's works to enjoy the Spotlight's latest. I was expecting more paraphrasing than there was, and actually found it funnier hearing them speak Shakespeare's original lines verbatim while gadding about wearing outlandish dresses and waving swords and such. Modern rhymes, references, and ad libs also moved the individual plots along, and there was a great deal more vomiting (mimed, thankfully) than I remember the Bard having scripted.

The one performance aspect of The Complete Works of William Shakespeare (abridged) [revised] that could have been improved on Thursday was the audio. The actors were mic-ed, but the space is very echoey and there was an abundance of overlapping shouting. Also, when Mahr, Fischer, and Tubbs spoke rapidly and their pitches reached higher registers, their speech was unintelligible, at least to my old ears. (This was where my Shakespeare studies really came in handy, though, as I already knew some of the lines, even though I missed jokes.) More careful diction and a bit of a slowdown would have helped. However, the actors pulled off so many hectic alarums and excursions that words were sometimes less important than wacky physicality or blue anime-style wigs.

Thus, I can confidently say, with no apologies to Shakespeare, because what's he gonna do to me now …?

Never was a story of more mirth

Than this of the abridged Bard in all the Earth.

The Complete Works of William Shakespeare (abridged) [revised] runs at the Spotlight Theatre (1800 Seventh Avenue, Moline) through March 28, and more information and tickets are available by calling (309)912-7647 or visiting TheSpotlightTheatreQC.com.