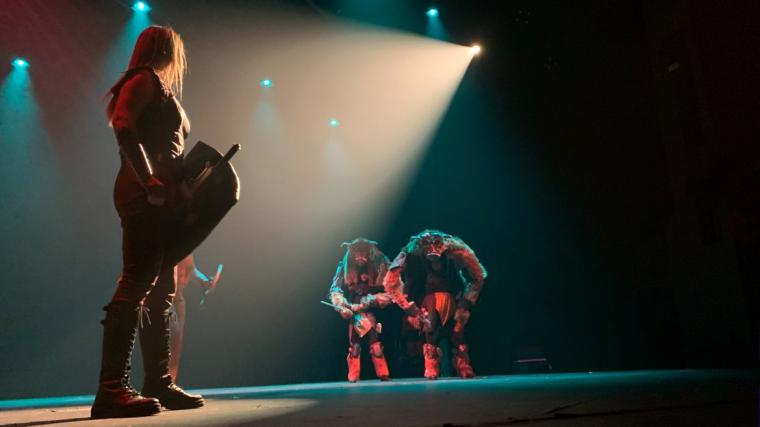 Becky Meissen and the Bug Bears in She Kills Monsters

I fell hard in love with playwright Qui Nguyen's She Kills Monsters the first time I saw it at the Playcrafters Barn Theatre in the summer of 2019. We trysted again that fall at Augustana College. I was consequently happy, on Saturday, to enjoy a new rendezvous at St. Ambrose University. Director Daniel Rairdin-Hale and the show's staff, crew, and cast have assembled a singularly beautiful, big-scale-impressive production of Nguyen's play.

It centers on Dungeons & Dragons, a tabletop game involving quests through mythical worlds. Emerging in 1974, it's earned a huge following, with interest growing during the pandemic. In D&D, as in life, you meet people, challenges, and even monsters – and a dice throw sometimes decides your fate.

The show opens with voice-over narration instead of an onstage performer – an effective choice, setting the tone for the captivatingly cinematic experience to follow. A grieving Agnes (played by K. Hampton) longs to learn about her younger sister Tilly (the impressive Becky Meissen), whom she ignored in life. She asks Tilly's friend Chuck, portrayed by Beckett Conwell, to let her play Dungeons & Dragons, with her sister's notes as a guide. Chuck does, while trying to wow the "wicked old" Agnes (she's 24). Agnes exudes relatable befuddlement and exasperation dealing with her sister's game character Tillius and her friends Lilith, played by Nyssa Wagner, and Kaliope, played by Elena Vallejo. (As Tilly's loyal companions, naturally they persecute Agnes.) 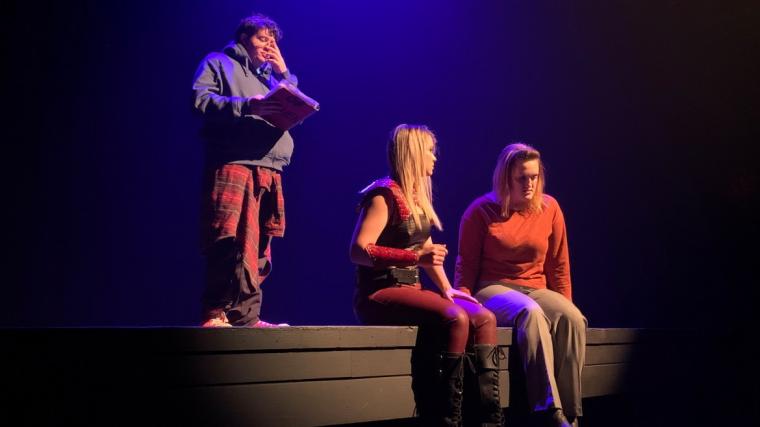 Zachary Weih portrays the comically unenthusiastic Orcus while wearing very impressive (and probably very uncomfortable) garb. Ruby Jasa and Ebby Barber play an evil, annoying pair, the likes of which you've probably encountered. Megan Rohn was an irritating faerie – but here in New Landia, even a delicate pixie can vex you to death. Sam Lange, as perpetual fall guy Steve, did everything right. Caroline Sieren was effective as Agnes' slightly cranky friend Vera, and Andres Garcia as Agnes' boyfriend Miles played a solid foil to the others. During the performance, I became so used to the wildness of this fantasy world that Miles' mainstream reactions came off as hilarious. In fact, every performer plays the comedy adroitly without overdoing it. It took a couple of actors a bit to warm up and inhabit their characters, but once the ball was rolling, they kept it going.

To kill monsters, Agnes and Tilly need monsters – and here, they're fantastic in both senses of the word. They include puppets and puppet/costume hybrids and are gorgeously hideous, run with professional finesse. A tremendous amount of work evidently went into designing, building, and operating them – even the figures that only appear briefly. On Saturday, actors wearing large, leathery, bat-style wings manipulated them so unobtrusively that I couldn't tell exactly how they did it. There's also a large, stationary, viscous item animated solely with shimmering, undulating light. I can imagine the late, innovative creature creator Jim Henson bestowing a fond paternal smile on these marvelous effects.

Speaking of light, it's a big part of the beauty and drama. The colors of light include heroic golden spotlights and a lurid mix throwing purple, red, and green in three directions, reminiscent of old-school comic book illustrations. Like pauses in speech and music, blackouts can be as expressive as lights. Locations can change as different stage areas – left, center, right – are lit. Here, at times, several short action scenes follow in quick succession. When the lights go out on one stage area and immediately come up on another area with clusters of performers already in position, it creates a filmic montage effect I don't believe I've seen on stage before. At one point, an actor moved to another stage area in darkness as the main action continued. When he was lit again, it read as a change in camera angle in a movie. Black-clad performers wielded props and puppets and accomplished the many scene changes silently, and almost invisibly, in the dark. 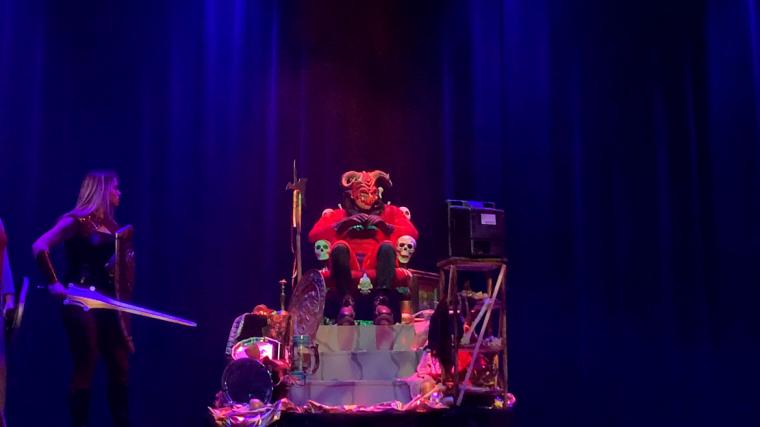 There are so many wonderful details in this production. Chuck flips up the top of his ubiquitous adolescent hoodie to become a cloaked, over-dramatic dungeon master. Tilly introduces her powerful, glamorous allies in fashion-runway style. The beats include 1990s radio fare, and the incidental music during fight scenes features heavy-metal guitar licks and semi-majestic video-game-soundtrack-style meanderings. (This D&D is the tabletop version, but the synth-y computer sound is nonetheless perfect.) The graceful battle hits are synchronized to the music, and with the attire, weapons, beasts, sound effects, and lights, the fights are magically epic.

Given my 800-ish-word count, I wish I had enough room to name all the designers, builders, and runners/performers responsible for the technical aspects, because they did amazing, exemplary work. So many interdependent performance elements and practical effects must come together at the right moments in quick succession for this show to work – and they did. (If even a few of them had been off, Rairdin-Hale's production would have become a messy melee.) These words just can't convey the grand scope and impact of She Kills Monsters. The crowd's laughs, cheers, and applause during scenes – and not just at the end of them – demonstrate the power of this production. In short, these SAU folks killed it.