Game On!: Haus of Ruckus' “Random Access Morons,” at the Mockingbird on Main through September 11 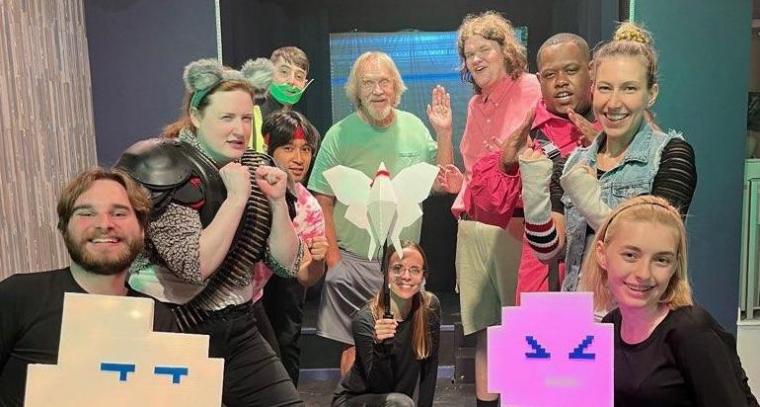 T. Green and Calvin Vo, the co-stars, co-masterminds, and co-comedy icons behind Haus of Ruckus, came onstage for the pre-show announcement during Thursday’s opening-night performance at the Mockingbird on Main, and their latest stage piece Random Access Morons was immediately funny – in the best, most bizarre way possible. The 90 minutes that followed kept up that same energy.

In the third installment of Johnny-and-Fungus adventures – following last fall's “Jacques”alope and this spring's “Pants” Labyrinth – the slacker pals (Vo and Green, respectively) are sucked into a retro-style video game, Battle Mountain Brawlers: The Brawlers of Battle Mountain, where they quickly befriend a gemstone butterfly named Tutti (Emma Regnier) that serves as the game's tutor. Tutti and our wacky duo consequently travel across the game and meet, brawl, cook, and brawl some more with a panoply of video-game characters.

While this simple plot description seems fun as is, wait until you experience the show. Green's and Vo’s writing – full of hilarious one-liners, wild plot devices, unexpected turns, and, above all, a complete embracing of the strangeness and individuality of these characters and the elements of the show’s world – makes it a well-polished, über-wacky night of performance, street-fighting, and game-playing.

The pair's script was only enhanced by the production quality contributed by the entire team. Green and Vo have described the Haus of Ruckus brigade as “taking their comedy very seriously”,” and this holds true in so many ways.

Johnny and Fungus, for instance, have this very specific, strangely childlike energy to their relationship and characterizations. They get excited about nearly everything, have some unique one-liners, and are just plain fun. Green and Vo, beyond their talents in directing, writing, and production design, also set Random Access Morons up for success in their on-stage work. And given the Mockingbird's intimate space, the production design was top-to-bottom clean and impressively executed. It featured projected clips of indie and old-school video-game reels, as well as a couple of moveable scenic elements in various shapes that augmented the scenes.

The sound design literally packed so many punches – all of the safely executed and cheesy fake fighting was accompanied by punching, kicking, (insert other fight moves here) sound effects, which wonderfully enhanced the video-game world. In truth, while the scenes moved quickly, the transitions between them were a little long, and contained little to no transition music, which, at times, took me out of the action a bit. For my tastes, the momentum also lagged just a tad too long toward the end. Overall, though, the show delivered enormous drive and constant laughter, and the pacing was mostly swift.

Everyone's costumes were produced quite well, fitting within the campy, retro, video-game realm, but executed professionally and with great detail. What made the costuming even more notable was that Johnny and Fungus wear more normal clothing throughout the play, but are surrounded by very detailed and cartoony outfits, which made their journey in this video game all the more fantastical. Designed and built by Vo, the production’s puppets were also quite intriguing, most of them crafted beautifully merely out of LED lights and corrugated plastic.

As that tutorial butterfly, Emma Regnier displayed some wonderful dry humor and excellent stage presence. With only two points of expression on Tutti (the LED light and the puppet’s movement), Regnier brought this character to life in an endearing way. Random Access Morons also features two party-crashing, insult-spewing game viruses, which were created from Johnny sneezing all over the video game. They were entertainingly puppeteered and voiced by Bella Kuta and David Weaver, both of whom were successfully mean and virus-like. 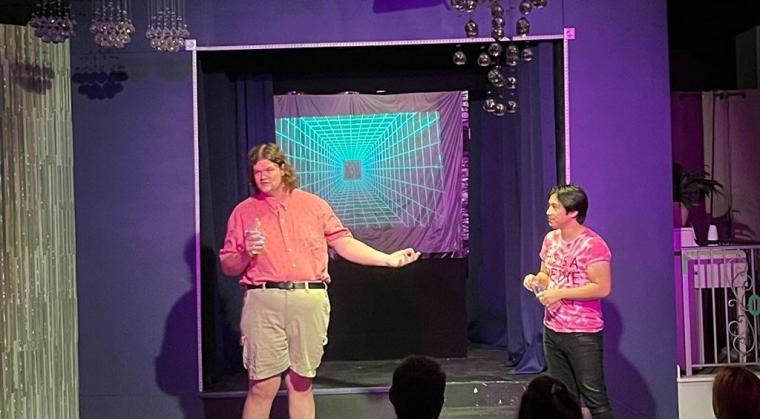 On their journey, Johnny and Fungus encounter various fighting opponents. One of the first, more memorable characters is a fierce nightclub owner and wannabe chef, played by Keenen Wilson, who also doubles as the climactic boss battler with a rockin’ green hairdo. In another memorable scene, Johnny, Fungus, and Tutti come across a pair of scary biker rats (Jo Vasquez and Sarah Goodall). This scene boasted some of the production's heaviest stage combat, and the biker rats were ridiculous, intimidating, and even used their hair as a part of the action. (Vasquez had an absurdly long ponytail she used as a weapon.) We're also treated to a mysterious character: the overseer of the game. Portrayed by Max Robnett, this villainous figure has some wonderfully controlled dry humor – a nice contrast to the action-packed plot.

Random Access Morons, and the entire Johnny-and-Fungus canon, could easily exist as a wacky TV series, or an actual video game. But the in-person experience of laughing along with its shameless weirdness is pure, unmatched bliss. It is stupid good, stupid funny, well-crafted, and well-polished. Everyone onstage seems to be having such a blast, and our audience had fun right along with them. The Haus of Ruckus takes their comedy seriously, and it shows, and it's rare to have a work with this much chaos and wonderfully dumb humor be produced so well.

Do yourself a favor: Head down to the Haus of Ruckus, get sucked into this ridiculously fun, epically random video-game extravaganza, and experience some of the most unique original work in the Quad Cities. It really packs a punch.

Random Access Morons runs at the Mockingbird on Main (320 North Main Street, Davenport IA) through September 11, more information is available by visiting TheMockingbirdOnMain.com, and reservations are available by e-mailing hausofruckusqc@gmail.com.