My Love(s), There's Only You (Both) in My Life … : “A Gentleman's Guide to Love & Murder,” at the Clinton Area Showboat Theatre through June 16 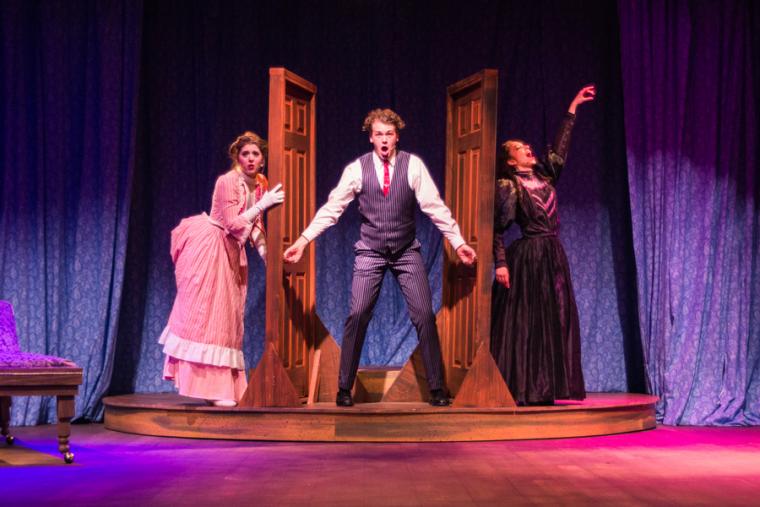 The Clinton Area Showboat Theatre's production of A Gentleman's Guide to Love & Murder is likely the most purely entertaining show I've ever seen. Everything exists to delight, laugh at, or marvel over – as long as you can accept murder as entertainment, which humanity has been doing for at least 2,500 years of recorded history.

This 2013 musical about homicide and romance won four Tonys, and refreshingly, the show was derived from a novel and not a movie. British author Roy Horniman wrote Israel Rank: The Autobiography of a Criminal, upon which the 1949 film Kind Hearts & Coronets also was based. The book is by Robert L. Freedman and the music by Steven Lutvak, with both contributing lyrics. These Americans created a melodramatic farce set in 1909 London, and while I don't know how any Brits feel about the show, this Anglophile found it enchanting. Director Lara Tenckhoff and musical director Laurie Lewis manage this talented troupe, and choreographer Zoe Replinger (a Rock Island High School grad who studied with the Curtainbox Theatre Conservatory and also is in the show's ensemble) directs their very lively steps.

In the material, there's no message to ponder. In the staging, the costuming by Rebecca Rankin is beautiful (and plentiful). Hayden Bearden's sound design had exemplary balance. The simple but clever central set piece designed by Anthoy Karpinski is utilized as several locations, with the lighting by Aimee Hollins helping paint each scene, as well as provide punch-ups to the action.

And action there is. This show held me captive; I didn't have one spare brain cell to devote to worries or pains. The accents are consistent and don't distract. The acting is nuanced – not as broad as I'd expected, considering the script. And in this cozy theatre, every audience member could see every smirk, flirt, doubt, and slow burn. 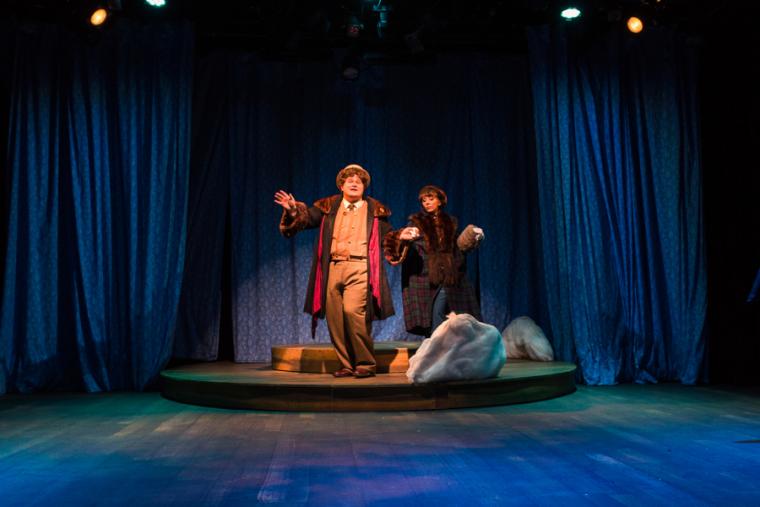 The vocal aptitude is uniformly stunning. Just as the titular gentleman Montague (the engaging Ben Cherington) finds it impossible to decide between the two loves in his life, I can't choose any standout singers. Moreover, they don't merely flaunt high-quality voices. There are emotions in those notes and faces, and skills in tongues going trippingly through the syllables in the prestissimo numbers. The patter songs are reminiscent of the best of Gilbert and Sullivan, and the performers handle these as expertly as if they were born to sing their words, like the show's inhabitants of Marvin Kaye's G & S realm in The Incredible Umbrella. (Track that down and read it. Really.)

Nick Berninger is absolutely amazing – a virtuoso. I won't give anything away regarding his Gentleman's Guide function, but you'll see him a lot and love him more with each scene. There's an interesting bit during "You're a D'Ysquith" near the top of the show. Kathryn Aarons' Miss Shingle, in describing Montague's convoluted genealogy, does so in American Sign Language as well as in song, and Monty joins in the signing. It must be a nod to the deaf community, as it's not a plot point, and I doubt it was in the script (where the authors would've employed British Sign Language).

One genuinely touching scene shines through all the levity – the one in which Monty sings to Sibella (the hilarious Eden Mau) about how deeply she captivates him despite her callousness. She is the definitive shallow femme fatale, but, like Monty, I want her that way. Monty's other love interest Phoebe (the charming Lauren Medina) is smart, confident, and kind – the character I cheered for the hardest. (Silently, of course.)

The ensemble populated the stage pleasingly as diverse characters throughout. I salute the understudies in particular, as they must learn the lines, songs, and dances of one or multiple characters in addition to the parts they already play. It was only after the show that I read in the program that nine of the cast members are still in school (still in school, I say!), one just graduated, and one is working toward his MFA degree. The virtuosity in these young performers astounds me. I foresee great careers. 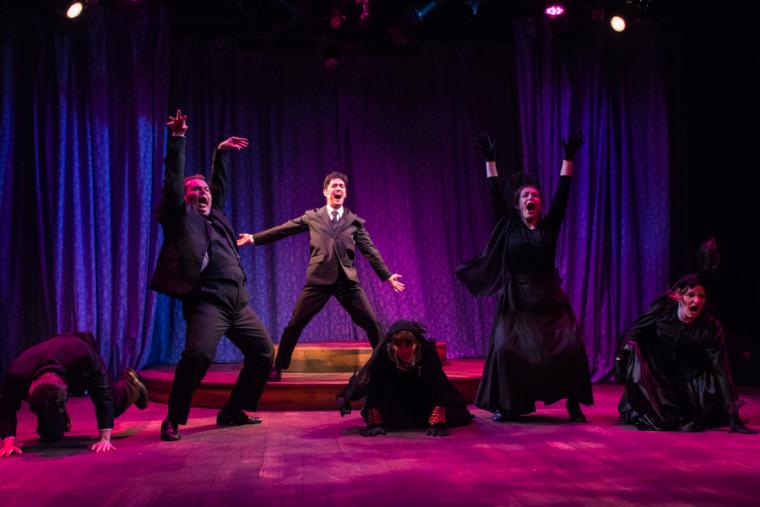 You don't have to be familiar with the pervasive influence of the English class system to understand Monty's lust for power and money. (Lust is among the seven deadly sins, after all.) But understanding the strict division of classes does help in appreciating Monty's machinations in achieving his ambitions. Also, the societal pressure to be proper at all times gets in his way, to amusing effect.

This high-energy musical is a perfect show to open the Showboat's "British Invasion" season in which the theatre is marking its 30th year as a professional company. With the top-drawer talent it's attracted over the years, there is much to celebrate, and I applaud the performers, crew members, staffers, and audiences who have supported it. To add to the celebration, producing artistic director Matthew Teague Miller announced before the performance that the Showboat became an Equity theatre company this year, which is a big deal for both the venue and the future actors who'll work there. (Miller also asked everyone to take a photo of him right then and there – an opening-night tradition – and I complied, not wanting to bring any ill fortune upon this production.)

Has anyone ever called this place "Broadway on the Mississippi"? I just did.

A Gentleman's Guide to Love & Murder runs at the Clinton Area Showboat Theatre (303 Riverview Drive, Clinton) through June 16, and more information and tickets are available by calling (563)2420-6760 or visiting ClintonShowboat.org.