Get Your Geek On: “She Kills Monsters,” at Playcrafters Barn Theatre through August 11 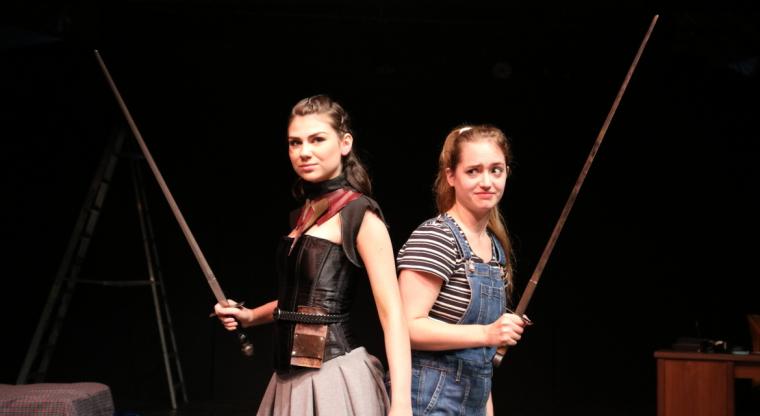 Kassidy Holdridge and Elizabeth Melville in She Kills Monsters

Earlier this week, the Educational Theatre Association released its annual “10 Most-Produced High School Plays” list. She Kills Monsters, by Qui Nguyen, is number seven. And other than having plans to see Tuesday’s dress rehearsal at the Playcrafters Barn Theatre, I honestly hadn’t even heard of the play before – but now, after seeing it, understand why it’s such a popular choice.

Directed by Jaclyn Marta, this production is set in the mid-'90s, which probably helped costume designer Kathy Graham greatly since, apparently, those fashion trends are back in style. The overalls and scrunchie Agnes wore were definitely '90s, and the reappearance of stretch tattoo chokers carried me back to a simpler time. Eric Teeter’s sound design was a true blast from the past, as well, firmly establishing the retro period in which She Kills Monsters resides.

Before this production, my prior knowledge of D&D was limited to knowing that assorted polyhedral dice are used, making me only slightly more prepared than Agnes when she sets out. So I absolutely appreciated Chuck’s role as not only guide to Agnes, but for helping the audience along as he doubled as narrator. DeKeyrel’s complicated dungeon-master job meant that as he controlled the virtual world’s action and it leapt to life in Agnes’ imagination and on stage, he was always mouthing along silently with Tilly, Lilith the Demon Queen (Stephanie Collis), and Kaliope the Elf (Emilia Hughes) throughout the show. DeKeryel guided the group from his spot on the cast-off basement furniture surrounded by caffeinated beverages and snacks. (Don't eat his Twizzlers, by the way ... though I'm not sure Chuck himself actually ever did.) 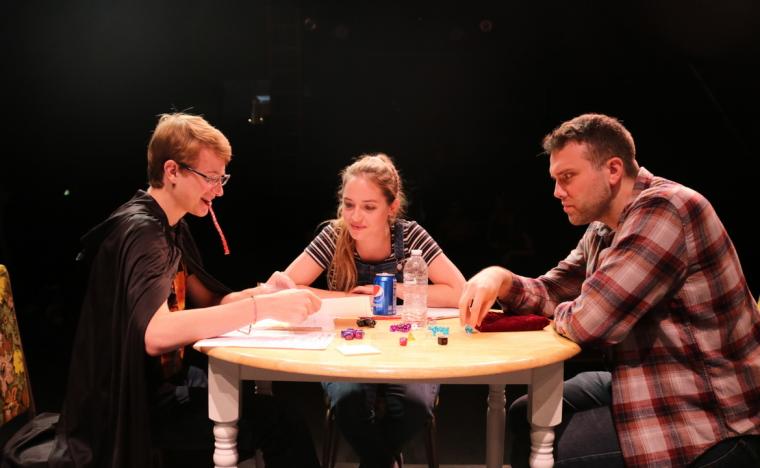 As Agnes grows to learn about Tilly’s D&D life, she meets the real-life counterparts of the fictional characters, which leads her through the grieving process. While this all sounds deep and heavy, She Kills Monsters is surprisingly funny from its smaller moments – as when we meet Orcus (Ryan Dondanville) while he's watching Friends and Chuck does the requisite theme-song handclaps – to its larger ones, especially when adult characters appear. Agnes’ boyfriend Miles (Brendan Sears) sparked a lot of laughs whenever he arrived on stage. Miles seems to live in a place of bewilderment for the better part of this 90-minute one-act, but his character was always good for a laugh. Sears’ D&D counterpart is called Gelatinous Cube, and his deadpan seriousness as Jello was belly-shaking funny.

Not to be outdone in the battle for comedic relief was Mallory Park’s Vera, the high-school guidance counselor whose “support” primarily comes in the form of yelling at the students (especially Nathan Lundburg’s Steve), telling them their problems don’t matter. Teacher of the year Vera probably isn’t, but she is a good friend to Agnes, helping her re-establish truth from the fictional role-playing.

At the heart of this production are two sisters who didn’t have much in common and therefore barely knew each other. Kassidy Holdridge brought a sense of all-knowing seriousness to the Tilly role; she was very matter-of-fact, and certainly unapologetic for being herself, speaking with the subtle motivation that she knows more than her sister but not wanting to appear superior. Holdridge was captivating to watch, especially during the fights choreographed by Payton Brasher. As Agnes grapples with the realization of just how much of her sister’s life she missed out on, Melville’s primary emotions switched between sadness and confusion so Tilly and Agnes balanced each other out. She Kills Monsters as a whole is well-balanced: sad moments pair well with moments of gut-busting laughter. Plus, the audience can learn and appreciate D&D along with Agnes as the young woman finds a way to cope. 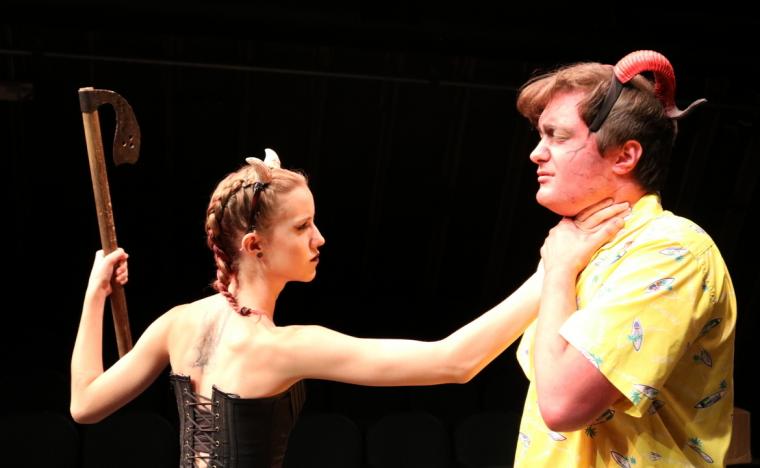 Director Marta kept her production moving, but because many of the adventure’s battles end with deaths (I lost track of how many times Lundburg dies, but it was a lot), some scene shifts dragged the pacing as the large cast moved off-stage. But I enjoyed Marta’s placement of the battles that worked the whole room, especially the upbeat dance battle with Evil Gabbi (Gabby Hoeper) and Evil Tina (Hannah Passno), though the reaction from this led to one of the show’s most unbelievable moments. The fault is completely playwright Nguyen’s, but it took a willing suspension of disbelief to buy into Agnes, the high-school English teacher, destroying a yearbook and yelling at two students.

Playcrafters' Barn Owl Series production of She Kills Monsters really surprised me in its complexity. This is a production filled with comedy, a lot of heart, and a strong message, making it an opportunity for audiences to both be entertained and informed. Go see for yourself why a play about nerds is so popular.

She Kills Monsters runs at the Playcrafters Barn Theatre (4950 35th Avenue, Moline) through August 11, and more information and tickets are available by calling (309)762-0330 or visiting Playcrafters.com.