Ghost with the Most: “The Woman in Black,” at the Playcrafters Barn Theatre through January 21 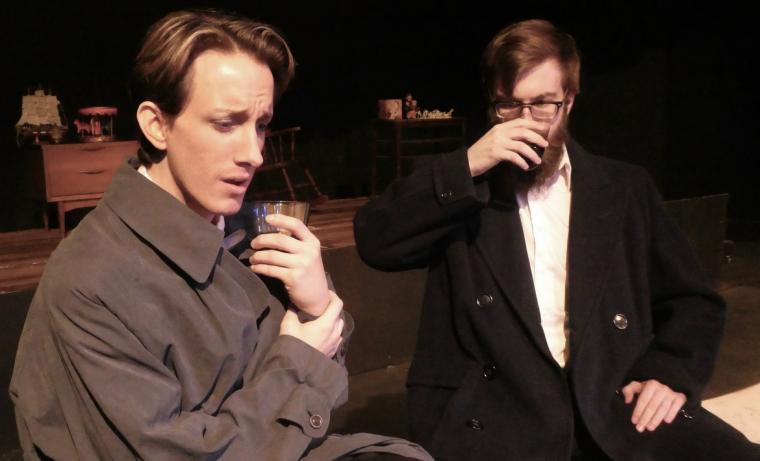 Adam Cerny and Andy Curtiss in The Woman in Black

No one could conceivably mistake author Stephen Mallatratt's The Woman in Black for a comedy. But I wish someone had informed my central nervous system of that, because at the Playcrafters Barn Theatre's January 13 presentation of this two-man ghost story, I could barely suppress my delighted giggles, let alone wipe the Cheshire Cat grin off my face. Director Craig Cohoon's production was such a ticklish and sustained creep-out that I chuckled and smiled in appreciation as much as amusement, even when I was silently begging one of our leads to not, not, open that scary-ass door.

During the run of any show, there's nearly always that one performance you wish everyone had seen due to something, or many things, going so magically right. I'm tempted to say that Saturday's may have been that performance for this particular run, if only because of the thrilling visual perfection of a dropped flashlight as it broke the darkness by spinning in a half-circle. (What I would've given for this sublimely spooky/funny moment to have been recorded for posterity!) Yet Cohoon's Woman in Black, as acted by Adam Cerny and Andy Curtiss, is so fantastically polished and confident, and so enjoyably eerie, that you'll be in for a major treat no matter when you attend. The gently rocking chair, the faraway screams, the subtle illumination of an entranceway, the arrival of a mysterious something mere feet from us … . For most of its two-hour length, Playcrafters' delicious season-opener makes feeling scared inseparable from a state of bliss.

Adapted from Susan Hill's 1983 novel, The Woman in Black casts Curtiss as Arthur Kipps, a British lawyer who has written an autobiographical play detailing a nightmarish occurrence from his past. Kipps hopes that performing the piece will exorcise the horror's residual effects, but even though many years have passed since the terrifying incident, the man can't make it through his opening lines of first-person dialogue without collapsing in stutters and shudders. However, the actor whom Kipps has recruited to hear his work – an unnamed character portrayed by Cerny – has a suggestion to help steady the author's nerves and produce a more effective drama: He himself will play Kipps in performance, with the playwright serving as narrator and assuming several supporting roles. 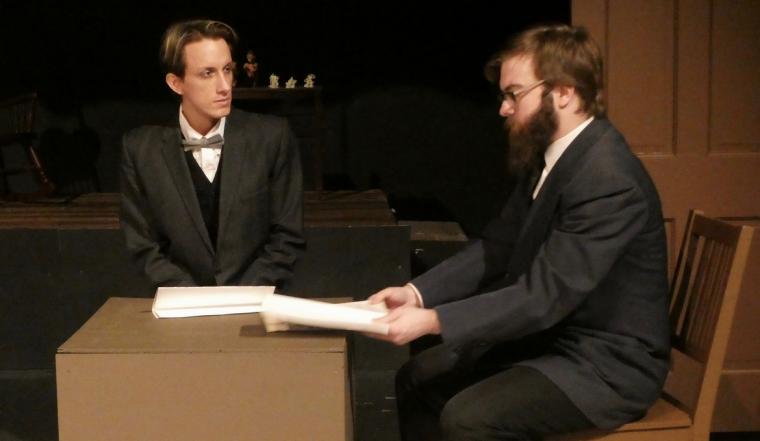 This may sound confusing, and the early confusion is exacerbated if you peruse the show's program and notice that, per Mallatratt's script, Cerny is credited as “Kipps” and Curtiss as “Actor” even though it seems like it should be the other way around. Yet the play-within-a-play is straightforward stuff, with Cerny's Kipps, having been sent to the funeral of a recently deceased client, becoming increasingly frightened by mysterious sights and sounds, the odd behavior of the locals, and the occasional spectral presence of a woman in black. In Playcrafters' take on the material, this is also terrifically engaging stuff, especially with Cohoon, his deliberately minimalist set, and his sterling performers giving the impression that we're gathered together around a campfire in the woods, sharing a few good scares just before bedtime. All that's missing are s'mores.

No amount of scenic wonder can compensate for a lack of imagination, and Cohoon's Woman in Black staging is so imaginative that I was pretty sure scenery would've just gotten in the way. Employing only two rolling boxes, another box with a lid, a couple of chairs, and the aforementioned scary-ass door, the playing space – accented by Bill Peiffer's top-tier lighting and Alexander Richardson's exquisite sound effects – proved endlessly malleable. Boxes became desks and train compartments and a bed and a horse-drawn carriage; locales unadorned with set pieces became a funeral parlor and a cemetery and a dangerous marsh; Cohoon's serpentine choreography gave the impressions of village streets and rolling hills and labyrinthine mansion hallways.

And not to give things away, but there are other playing areas, too, including a rear-right zone where Curtiss narrates and changes jackets, a tastefully furnished and beautifully hidden secret room (the scrim is truly one of God's great gifts to theatre), and specific spots where you may find actions occurring in hair-raisingly close proximity. The Woman in Black's director brings phenomenal invention to his use of available space and practical light, with Kipps' flashlight and lit candle creating beguiling shadow effects, and Cohoon comes up with more arresting tableaux that you might expect given such a small cast. He also paces the proceedings with skill – aided, to be sure, by actors who prove superbly adept at pacing their own performances. 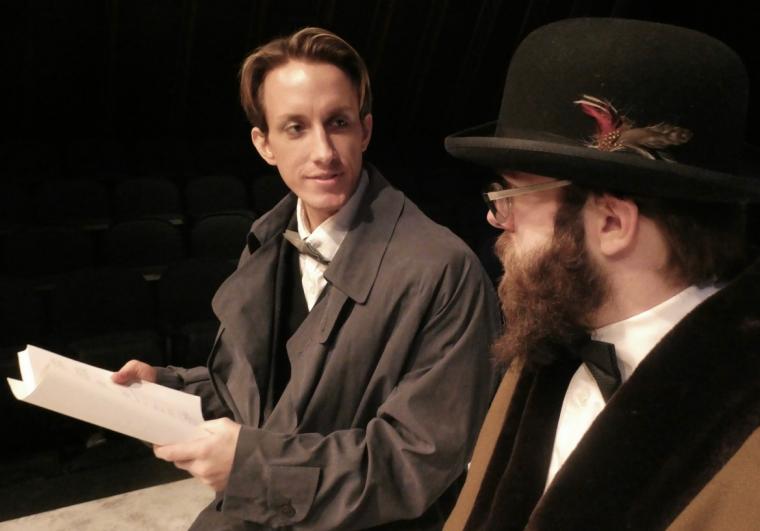 Charged with playing real-life Kipps along with his play-within-a-play acquaintances, Curtiss finds dexterous, ingenious ways of individualizing characters, subtly shifting his British dialects according to region and class, and routinely changing tempos and timbres according to personality; this is truly masterful vocal acting. (I'd kill to see Curtiss in a show – The 39 Steps, for instance, or the one-man comedy Fully Committed – that requires dozens of these sorts of lightning-quick yet thoughtful transformations.) Yet Curtiss is also physically witty, never letting us forget that behind his many play-acted parts is Kipps himself: a timid, traumatized solicitor with no prior theatrical experience who's doing his best just to keep up. As his classical roles for Genesius Guild and the Prenzie Players have attested, Curtiss can be a powerful, commanding stage presence. Here, though, he drains himself of brio and assurance to create a series of precise, minor-key figures who stem from one meek, humbled, deeply tormented man. In doing so, Curtiss delivers an absolutely lovely portrayal – all half-dozen of them.

Cerny, meanwhile, is a performer of traditionally boundless energy, and the joy of his work in Woman in Black lies in its slow build toward Kipps' nervous breakdown punctuated by exchanges of genuine humanity. Amidst the re-telling of Kipps' tale, the narrative frequently stops for brief check-ins: Cerny's actor says “Wait!”, claps his hands, the house lights rise, and the woman-in-black storyline is paused for actor-to-author questions, comments, and praise. All of these moments seem spontaneous and natural, and Cerny, with his conversational rhythms and cadences, makes something difficult look easy in these scenes – he plays modern without making it feel present-day. (Nothing about his performance suggests that it's 2018 instead of early-to-mid-20th-Century.) But Cerny does that in his role as Kipps, too, speaking to both Curtiss' characters and us with immediacy and consistently unpredictable line readings; it sounds like the things he's saying are ideas that just popped into his head, the meaning of which he's working through even as he speaks. Cerny's is rich, nuanced acting here, and he's so supremely focused that he even makes you concerned for the fate of Kipps' tiny, invisible dog.

Both actors, in their more intimate encounters, could stand to raise the volume on their hushed chats, and there were a few problems with Saturday's show that may not be wholly solvable; an awfully long early break for a costume change (thankfully, the production's only one); a confusing finale to the main action simultaneously involving Curtiss narration, Cerny interjections, and sound effects; Cerny's Kipps writhing on the floor in what looks like an homage to James Franco's Tommy Wiseau intro in The Disaster Artist. (He's even screaming “Stella-a-a-a!!!” at the time, just like Tommy.) Yet these were distractions in an otherwise enveloping night of theatre evidenced by the rapt, attentive patrons, and I'd give added praise to a pair of other show participants if I knew exactly who they were. (The program offers a hint, but I don't want to presume.) Suffice it to say I was glad not to have seen their faces. If I had, as The Woman in Black suggests, my drive home might've been a lot more harrowing.

The Woman in Black runs at the Playcrafters Barn Theatre (4950 35th Avenue, Moline) through January 21, and more information and tickets are available by calling (309)762-0330 or visiting Playcrafters.com.