Ghostess with the Mostess: “Blithe Spirit,” at the Clinton Area Showboat Theatre through June 29 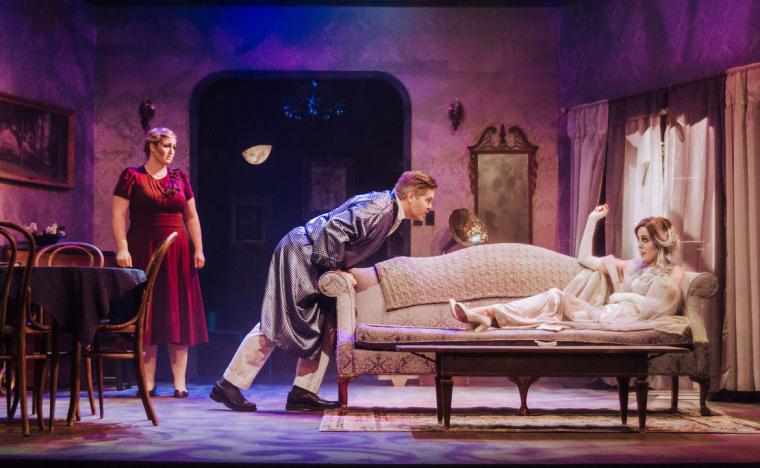 Noël Coward's 1941 comedy Blithe Spirit was adapted for film in 1945, as well as for television and radio and as a musical. It's been offered by multitudes of theatres, now including the Clinton Area Showboat Theatre – which proved, on Friday, that their production can stand with the best of them.

Producing Artistic Director Matthew Teague Miller took the directing reins, while scenic designer Tetta Askeland devised the lovely, authentic-feeling one-room set (it's important to establish realness before the weirdness) and Rebecca Rankin designed the appealing costumes, including a spectacular one for a spectre. Lighting designer James Kyle Davis and sound designer/engineer Hayden Bearden, meanwhile, handled the many eerie and startling effects beautifully in tandem. Timing is (almost) everything, and they have it.

As is usual in repertory companies, everyone crams a lot of work into several productions over only a few months; more than half of this cast was involved in A Gentleman's Guide to Love and Murder, which had closed only four days before Blithe Spirit premiered. I admire their skills and stamina, and hand an especially elaborate orchid bouquet to Ruth portrayer Lara Tenckhoff, who also directed the last show, is the theatre's associate artistic director, and is halfway through a pregnancy. In the summer. Lauren Medina, who played Gentleman's Guide's Phoebe, opens this show as skittish maid Edith with an expert physical comedy bit. The subsequent arch banter between Ruth and novelist husband Charles, played by guest artist David Coolidge, neatly establishes characters, sets the tone, and provides backstory. (Well done, Sir Noël.) They are a privileged pair hosting a dinner for another moneyed couple and a psychic – ostensibly to conduct a séance, but really to make mockery of the medium and give Charles free fodder for his work in progress. He's a lazy researcher and a cad! 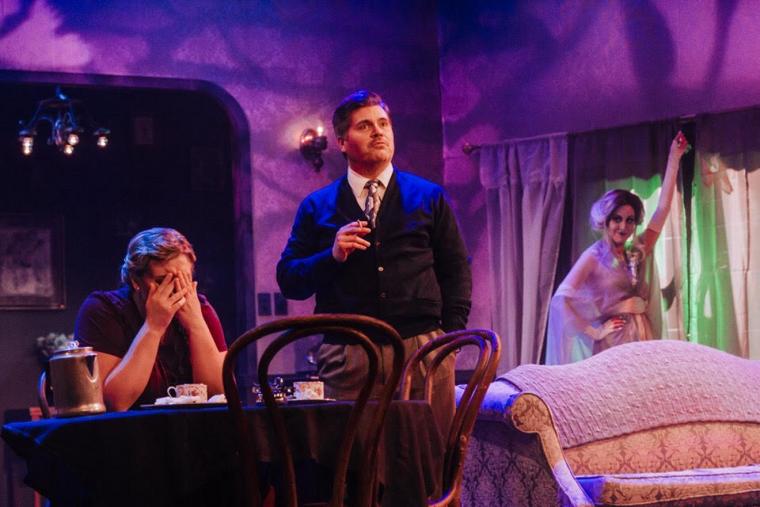 Coolidge has a list of impressive professional credits longer than his arms and legs combined. He inhabits the role comfortably and naturally, and as extraordinary events befall Charles, he portrays just the right amount of bewilderment and shock. It would've been an easy role to overplay, but Coolidge is not billed as a “professional guest artist” for nothing. He hits all the notes pitch perfect.

Tenckhoff exhibits the superior, slightly bored manner of a society woman so well that I kind of wanted to smack the character – but after the inexplicable starts to happen, she evokes sympathy even as she provokes laughter. Ben Cherington, who played Gentleman's Guide lead Montague, is dinner guest Dr Bradman here, while Kathryn Aarons plays the stylish Mrs Bradman, a part very different from her recent turn as the shady Miss Shingle. Their shallowness and disregard for the loony medium make them eminently smackable, as well. The doctor actually seems a friendlier sort, while the ebullient missus is more fun for a commoner like me to look down on. Odd how that works.

Ben Marshall is hilarious in the vocally and physically demanding role of psychic Madame Arcati. (He's also been busy, having played several characters in the Showboat's previous production). His accent is nowhere near Russia, but meanders throughout the British Isles from north to south England with stops in Ireland and Scotland. (The dialect was meant to be a mishmash to add to Arcati's outrageousness, as I know he can do accents impeccably … even if I did lose a few lines amidst the garble.) Marshall is also accomplished and able in drag. Arcati was written as a woman, though, and frankly, given the role's inherently comic nature, casting a dude seems like overkill.

Jami Witt is a busy actor, director, and lecturer, as well as the theatre's director of audience services, and plays Blithe Spirit's temptress Elvira with deliciously smug confidence. She sprawls comfortably and elegantly about the room, owning the space just as she schemes to own people's lives. Callous as Elvira is, though, she's fun to watch, and it would be difficult to smack her (for more than one reason). 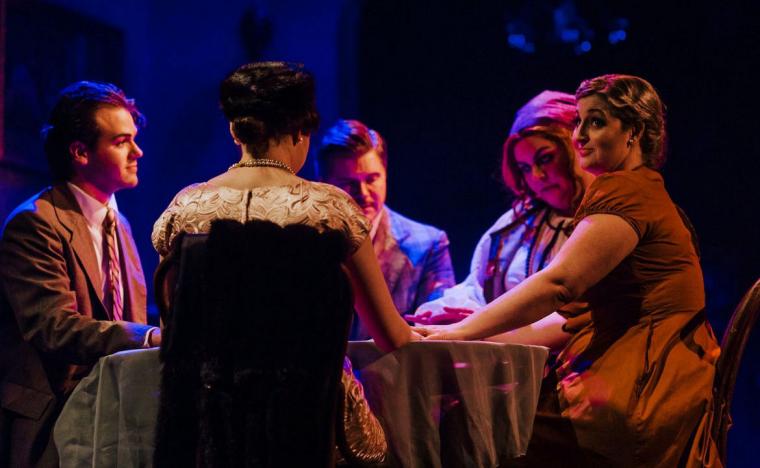 Blithe Spirit is a comic masterpiece, and this company did it full justice, with every aspect superbly executed. Well, almost every aspect.

My persistent mystery cough stresses me in theatres. I load up with lozenges (unwrapping only during laughter or applause) and stifle any hacking. This month, though, the gods have tested me. First, a stand-up performance by Eddie Izzard bombarded me with three hours of unnecessary theatrical fog – it was really there just to look cool – that was so thick even the comedian was coughing. Another show featured characters smoking. Then, this one assaulted me with constant fog and a smoking character. I was fanning the gag-worthy odors away, yet my eyes were still watering, making a fine night at the theatre something of an ordeal.

Was there a sale on fog machines? Is it influence from Big Fake Smoke? I implore theatre people: Let the cast and crew provide the awe, and act with fake cigs. Smoke detracts far more than it adds, especially when it persists throughout the entire show. Do, however, enjoy Blithe Spirit – the latest offering in the Showboat's British Invasion season. And if people are hacking, don't bother smacking. It's probably not their fault.

Blithe Spirit runs at the Clinton Area Showboat Theatre (311 Riverview Drive, Clinton) through June 29, and information and tickets are available by calling (563)242-6760 or visiting ClintonShowboat.org.