Gold Testament: “Children of Eden,” at the Prospect Park Auditorium through August 14 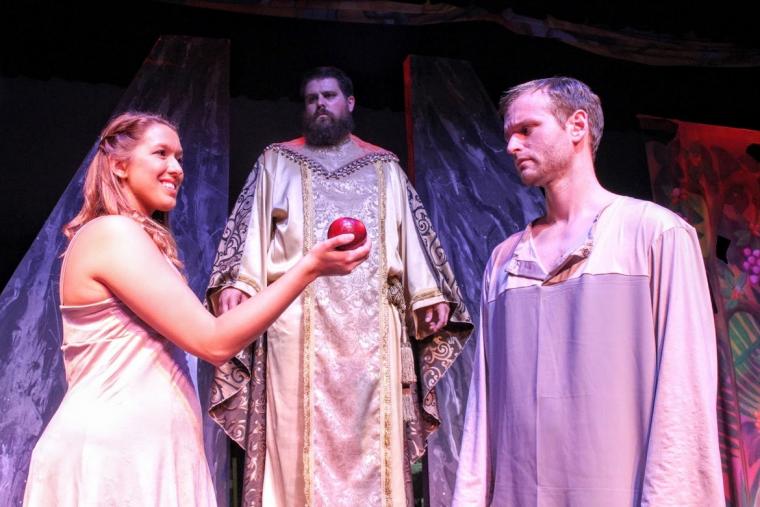 When walking into Quad City Music Guild’s production of Children of Eden on August 7, I had no idea what sort of beautiful music my ears were about to be treated to. The story I was familiar with. Composer Stephen Schwartz's score, however, was all new to me, and director Bill Marsoun has assembled a fantastic cast with which to tell this biblical story of the Earth's creation.

Children of Eden opens with the silhouette of Joel Kolander as “The Father” and a beautiful sky of stars behind him. Kolander’s big, booming voice let him command the stage, but also showed a great range in the tenderness of his singing abilities – and I would be remiss if I didn't mention his magnificent beard that I’m sure took just as much preparation and work as his characterization.

Book writer John Caird's story follows Adam (Troy Stark), Eve (Hillary Pieper-Erb), and their offspring Cain (Daniel Williams) and Abel (Adam Sanders) through the musical's first act. Stark and Pieper have splendid voices individually, but their real shining moments came in songs that were sung together – particularly “The Naming,” in which their voices meshed really well while Adam and Eve named all the animals of the world. Pieper-Erb is also very touching performing the show's title tune at the end of Act I, calling out to her father in Eve's last moments. In a bit that really surprised me on Sunday, the pit orchestra, at one point, stopped playing the song but the cast continued to sing, and the hairs on my arms stood straight up from the wonderful wall of sound the entire ensemble created. The second act brings us to Noah, played by Guild veteran Harold Truitt, as he and his family prepare for the flood. Music Guild's costume and prop departments always impress, and do so yet again here, as the parade of animals boarding the ark was definitely a highlight for my daughter who attended the production with me. I would say keep your eye out for the giant elephant, but honestly, you can’t miss it.

Of special mention in this act is Sydney Crumbleholme, who portrays Yonah, a house-worker in love with one of Noah's sons, and who wowed me with her vocal quality. Hers isn't a singing voice I would classify as “powerhouse,” but Crumbleholme's control and tone were excellent and a true delight to hear.

Noah's story is one I’ve heard a million times, but this particular telling highlights the importance of choice, in that we always have a chance to choose our own actions. It's a theme that's echoed three different times across the Children of Eden generations, and Williams' Cain and Mitch Diamond’s Japheth also have some very emotional, vocally strong moments that mirror one another's. As for the show's finale, it brings with it a song called “Ain’t It Good?” in which Katherine Zerull, in the role of Mama Noah, delivered a fiery vocal performance that caused Sunday’s audience to whoop and holler. Marsoun employs a very large ensemble cast, including an octet of storytellers who help move the action along, made up of the very talented Jennifer Sondgeroth, Dennis Harker, Heather Roman, John Erb, Abbey Donohoe, Tyler Finley, Ally Zahringer, and Ted Brown. His set design, however, is quite minimalist, but let’s be fair: It was at the beginning of time, too. And there's a lot of creativity to be found – the Tree of Knowledge presented through umbrellas, for instance, and the Garden of Eden's serpent played by a chorus line.

All told, Marsoun has put together a show that left me feeling stunned – and even, at times, shocked – by the talent on display, and by the unexpectedly beautiful music throughout. Plus, getting to watch the story of a father’s love with my daughter sitting right next to me made for a most pleasant walk through “The Garden” in the park.

Children of Eden runs at the Prospect Park Auditorium (1584 34th Avenue, Moline) through August 14, and more information and tickets are available by calling (309)762-6610 or visiting QCMusicGuild.com.