Governess Ball: “The Turn of the Screw,” at the Black Box Theatre through July 19 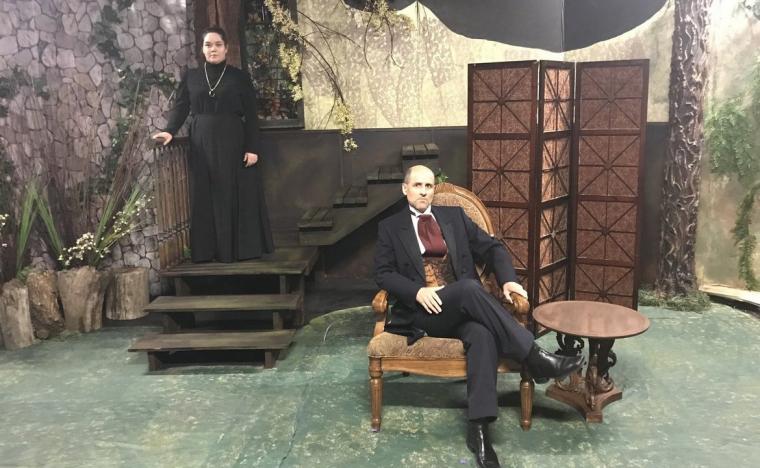 Attending The Turn of the Screw at the Black Box Theatre was a theatre experience unlike any I'd ever had, starting with my masked entrance into the building. I had my temperature checked via my forehead, received a squirt of hand sanitizer, and perused lobby cards for the cast information and ads (which in the old days would have been in the program) before entering the scrupulously cleaned theatre. In accordance with current Illinois protocol, the owners have reduced the theatre's capacity by half, with signs on the seats to be skipped.

These concessions to our new normal are mild and take only a few seconds for the theatre patron. This is the way of the world now. Nobody told me there'd be days like these. Strange days, indeed, as John Lennon sang. But I forgot the health precautions entirely when the show began, serving up a completely different dish of strangeness and fear that can't be warded off with physical protections.

Lora Adams directed the play, and also designed the lush yet spare set. (It would look great in my backyard, actually. Do you have to tear it down, Lora?) The playing space was part lovely garden, part lakeside, part parlor with a staircase. Touches such as a curtain draped over a branch helped the settings meld into one another, and the actors evoked clear pictures of other unseen places with words and actions. Michael Kopriva was the set builder, Tom Vaccaro did the beautiful scenic painting, and David M. Miller designed the lighting with a deft touch.

Aside from the health precautions, the production itself was a novel theatre experience, its story captivating and deliciously creepy. The Turn of the Screw by Henry James, an American expat, first appeared as a magazine serial, and has been adapted for radio, stage, film, and television. It's been spooking people for 122 years, and the Black Box's version, adapted by Jeffrey Hatcher, is elegantly and effectively presented.

English people have a deserved reputation for rigid politeness, avoiding embarrassment, and keeping improprieties secret. These personality traits help drive much of the comedy of English farces. They drive this English story in an entirely different direction. Inside the proper tea kettle of this crowd, there's a bubbling mass of depravity and perversion threatening to boil, shriek, and spew forth secrets. Here, the unspeakable is spoken – for the most part … eventually … – with plenty of mystery yet to wonder over.

At the top of the show, we see Kayla Jo Pulliam's unnamed governess interviewing for a position caring for two children at the country home of their uncle, a man who is apparently their only living relative. (At the moment, a housekeeper is looking after them.) He demands that she never communicate with him about his charges, and Matthew Walsh – who also takes on every other speaking role in the show – portrays the uncle with a placid demeanor and self-satisfied innuendo and smirk.

Pulliam and Walsh have impressive theatrical résumés and are well-matched in skill. Aside from the excellent acting, which is challenge enough, the actors employ convincing English accents throughout, without a mangled vowel or forced dipthong. It's a pleasure to hear their natural speech, and they are a pleasure to watch, as well. Pulliam is onstage for the whole show, wearing the same somber Victorian dress and beautifully displaying the governess' range of emotions. Walsh juggles his multiple characters deftly and acrobatically, also without the help of costume changes. Change of wardrobe really does help actors portray character and mood, and these two are on the wire without that net, and without rest.

Pulliam's governess is the kind any child would wish for – cheery, sympathetic, and playful while also firm and not too indulgent. She wins the children over and they capture her heart at once. Walsh's characters, meanwhile, all have their own temperaments and motivations that are skillfully played as they interact with the governess. Who is sincere? Who is lying? Who is playing malicious, manipulative games, and why?

At this performance, I was horrified in a way I've only been at the movies – never before at a live show. Pulliam's face during the final scene is enigmatically haunting. Traumatized? Triumphant? Drained? Mad? How does she do that?

Wisely, Adams has given the actors protective face shields, and believe me, they are next to invisible; I forgot about their presence immediately. Not only are they dazzlingly clear, but they don't hinder sound and don't fog up. Oh, and if you're a spectacles wearer, like me, here's a tip: Tuck the top of your mask under the bottom of your glasses, and you won't get fogged up yourself.

The Turn of the Screw runs just one weekend, and I recommend reservations due to the limited seating. The play runs an hour and 45 minutes without intermission. You won't be looking at your watch.

The Turn of the Screw runs at the Black Box Theatre (1623 Fifth Avenue, Moline) through July 19, and more information and tickets are available by calling (563)284-2350 or visiting TheBlackBoxTheatre.com.