Get Off Their Lawns! : “Grumpy Old Men: The Musical,” at the Circa '21 Dinner Playhouse through June 1 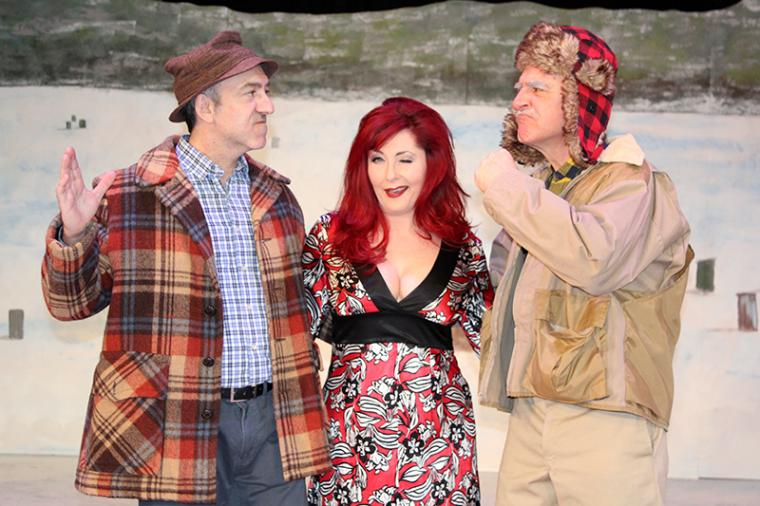 Don’t let the title of the Circa '21 Dinner Playhouse's Grumpy Old Men: The Musical fool you. I was expecting much yelling at young-'uns and kvetching over chessboards. It’s actually a colorful, fast-paced feast containing no young-'uns (but, yes, one chessboard).

The book is by actor/writer Dan Remmes, with music by successful composer Neil Berg and lyrics by Nick Meglin, a longtime MAD magazine editor, writer, and illustrator who died two months before this show's U.S. premiere last year in Maine. Though adapted from the 1993 film, this is one of the newest musicals to play in our area – or anywhere, as Circa '21 owner and producer Denny Hitchcock noted on Friday that his theatre was only the second venue in the country to acquire rights to the show. I haven’t seen the movie, but can tell by the modern cell phones and reference to the Internet that this adaptation was updated at least a little.

Director Curt Wollan, music director Ron May, and choreographer Andrea Moore conquer the challenges of this lively piece, handling a cast composed of national and local talent. Lighting designer Mike Turczynski and scenic designer Erica Zaffarano provide a lovely changing sky overlooking a stark backdrop, and signs are flown in and out during the quick scene changes as actors wheel set pieces around.

This Grumpy Old Men opens with clever visuals that eloquently establish a friendship turned to longtime rivalry in just a few moments. The setting is Wabasha, Minnesota – a real place 250 miles up the Mississippi – and the first number is a paean to the small town (just like The Music Man’s “Iowa Stubborn,” Beauty & the Beast’s “Belle,” Popeye’s “Sweethaven,” and Chess’ “Merano”). It also features the titular men, John (Luther Chakurian) and Max (Tom Walljasper), lobbing succinct, stinging insults at one another. Both actors are a few decades younger than their characters, but only the program photos reveal that. 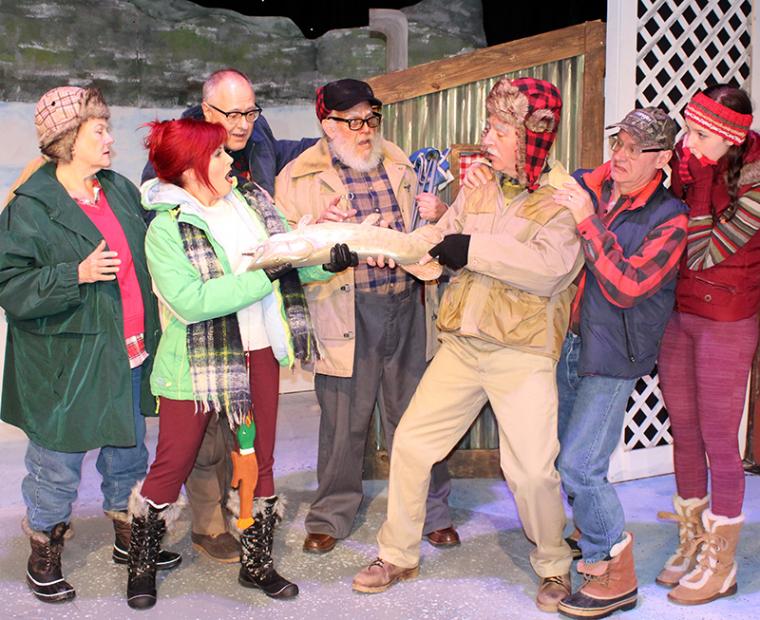 Audiences will be familiar with the songs’ types, and the lyrics and script are laced comfortably with vaudeville/music hall-style jokes and double entendres. The characters and situations, too, are time-honored: a feud, a villain, a fascinating eccentric stranger, love stories, a huge lie that complicates everything, and younger folks yearning to escape the sticks, where everybody knows your business.

Though the ingredients are traditional in form, fresh, witty elements are stirred into a delicious stew. For example, one number’s choreography combines a tango with a chorus stepping with Busby Berkeley-style flair. I also give props to one big fantastically realized, well-handled prop – or is it a set element? You’ll have to see for yourself.

Thankfully, the dramatic meal doesn’t include lutefisk (though the literal meal features red snapper, along with many comfort-food delights). Though there are a few “you betcha”s, the creators don’t lean on Minnesota stereotypes for cheap laughs. However, those aforementioned double entendres sometimes provide easy laughs. The plentiful references to sexual acts, organs, longing, and “conquests” – with two songs devoted entirely to them – might make this stew too spicy for some. Don’t bring the kids. And if you bring teenagers, one of them, or all of you, will likely squirm and blush.

The talents of Grumpy Old Men: The Musical's 17-member cast are uniformly superb whether singing, acting, or reacting. Their dramatic and physical energy are high throughout, and I’m amazed that the performers, clad usually in winter gear, seemed to bear not a drop of sweat among them at curtain call (during which they danced as well as bowed). 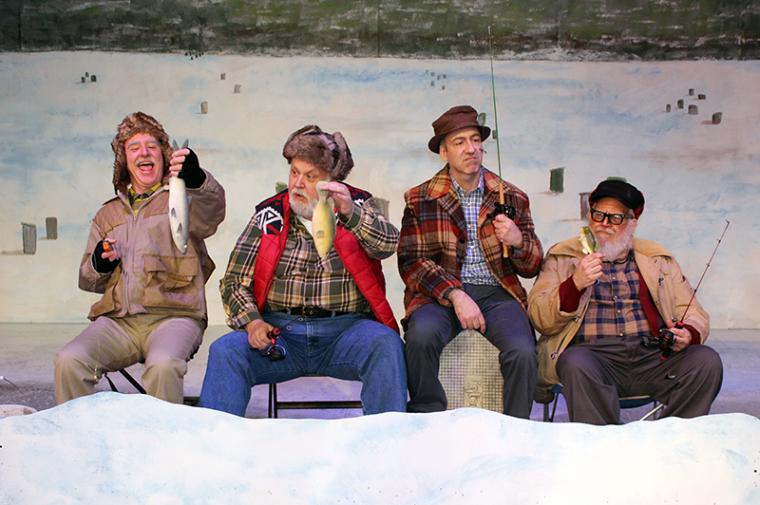 Chakurian plays John’s loneliness and shyness beautifully; early on, he acknowledges that he’s at his best “When No One’s Around.” He bears many burdens alone, and his sacrifices make him the character I’d most like to hug. Walljasper, meanwhile, ably owns the stage. His rage made me grin, and his amazing vulnerability during one number made me cry. If by some bizarre chance you haven’t seen him before (he’s performed at Circa '21 more often than anyone else), you, too, will become a fan. And Miranda Jane embodies pure pleasure as Ariel, the new neighbor our male leads are both trying to woo. Seemingly effortlessly, she portrays all the spirited desirability and kindness the part requires and more.

But each of the show's performers is a joy to watch and hear. In “An Angel,” John Payonk's Chuck transforms from workaday small businessman into stunningly operatic heavenly messenger. Kim Bogus, as the adorably loopy Punky, gets her own moments in the winter sun, while Rachelle Walljasper's Snyder madly and comically exhilarates in her self-righteous power.

As the production works out its few wrinkles going forward, actual wrinkles and grayer hair may help Chakurian. Among the cast’s otherwise spot-on makeup and costuming, his age makeup was conspicuous as unnaturally sallow, making him look ill. While sound designer Bret Churchill balanced the voices and music expertly, with the lyrics almost always clear, performers with deeper voices sometimes overpowered the higher-register singers. (The mic volumes could still be tweaked.) During “Way to Go,” one of the song's quartet members lost track of the lyrics for several bars, showing that even professional actors get opening-night jitters – though he faltered not a jot for the rest of the show.

As an actor of a certain age myself, I found this show refreshing for its many parts for mature performers, and if you can handle the risqué, Grumpy Old Men: The Musical will bring you joy.

Grumpy Old Men: The Musical runs at the Circa '21 Dinner Playhouse (1828 Third Avenue, Rock Island) through June 1, and more information and tickets are available by calling (309)786-7733 extension 2 or visiting Circa21.com.