Haus Party: “'Pants' Labyrinth” at the Mockingbird on Main, through June 5 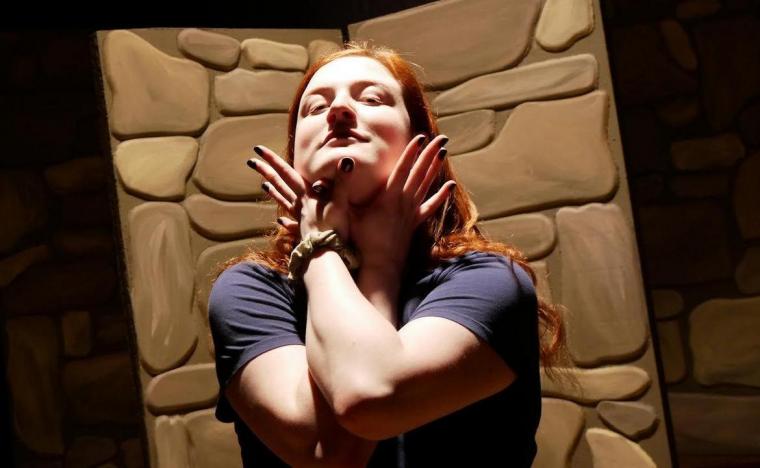 Epic quests – they're what make fantasy bestsellers sell best; what make boffo box office for blockbusters based on them: Lord of the Rings; The NeverEnding Story; The Wizard of Oz. A relatable person (or group) looks for clues, tools, and anyone who can help them in their daunting journey through new territory toward their greatest desire: the One Ring; a land's survival; home. Then there are stand-alone quest films, including Labyrinth (the 1986 one with Muppets and David Bowie) and Pan's Labyrinth (the more lucrative but less beloved 2006 one), both of which involve baby brothers, for some reason.

In November, I saw the original play "Jacques"alope by the Haus of Ruckus team of TJ Green and Calvin Vo at the Mockingbird on Main. It was a lively, uproarious quest story – simultaneously clever and ridiculous – of professional caliber, and altogether fresh. I adored the playwriting/directing duo's production and the characters they played (Fungus and Johnny, respectively), and was sad that, after the show, I could only see their desert doings in the rear-view mirror of my memory. But I witnessed the return of Johnny and Fungus at that same Davenport venue on Saturday. Imagine my delight when I learned that "Jacques"alope had gotten a baby brother!

"Pants" Labyrinth's title states its desired object – more specifically, they're wedding pants – and strange land's name. It has meandering pathways and blind-alley surprises, and makes bizarre, unexpected twists into other realms. (As it is a labyrinth, though, you may recognize a few characters from Greek mythology.) Again, the script is inventive and chock full o' puns, and most of its performers play more than one role. (Also, some characters have multiple names or insulting nicknames; it was tricky keeping track of who was Captain Flexi-Abs, Tiny Butler, or Gary.) 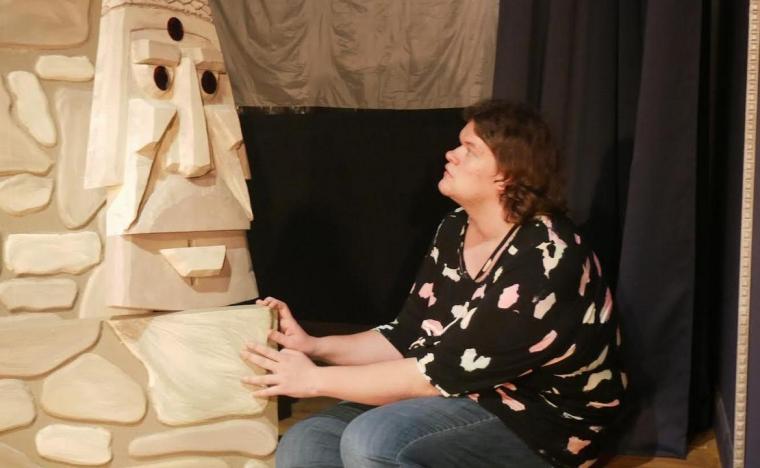 Green's Fungus, as before, is prone to distraction and expressing his oddball ideas. However, he does sometimes come to the aid of Vo's mostly pragmatic Johnny. The pair was very funny trying to keep on task while coping with the labyrinth's weird inhabitants. Their frequent minor clashes, as well as their matter-of-fact acceptance of one another's eccentricities, both fuel the humor and make their partnership realistic.

The explosively talented Keenen Wilson plays the powerful Minotaur with confidence, style, and the best natural-sounding evil laugh I've heard in years. His sybaritic Dionysus, downing martinis instead of wine, exhibits godly power as well as justifiable egotism for his own dance prowess. A day after seeing “Pants” Labyrinth, my backside is bruised from kicking myself for missing most of Wilson's other stage appearances. I hope to see him again soon.

Max Robnett's entrance as the Tragidiot, in familiar garb that evoked a local theatrical institution, drew my biggest laugh from the show, but it was far from the only one. Robnett is a wonderful physical and vocal comedian – vital skills here, as his character's face is hidden throughout. Sarah Goodall's smug, captivating Medusa exhibits an unexpected talent nothing to do with calcifying people. You've seen folks like Robnett's and Goodall's characters, bursting with theatrical, self-involved monologues. Here, both are fun and engaging while doing so.

The Oracle, portrayed by Jo Vasquez, is congenially infuriating – delightful despite her ineffectuality. Vasquez owns the stage, even in this smallish role. Amelia Fischer, whose primary character is the adviser/sycophant Mr. Numbnuts, also provides a hilarious Noo Yawk voice for a minor character. This actor is an octopus. (Not literally; stay with me here.) We can describe a great actor as a "chameleon," but an octopus is even better at camouflage, and while I've seen Fischer perform many times, her versatility continues to astonish. 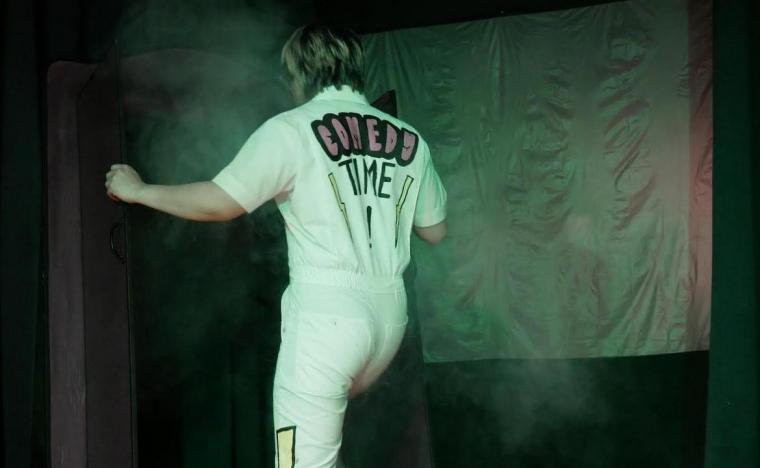 Speaking of versatility, Andres Garcia plays two big-headed characters and one small-headed one. Two speak; one is silent. One's a bad-ass; one is friendly; one is … . Well, you'll have to see for yourself. (Garcia is no stranger to strange roles, as I last enjoyed him as Miles/Gelatinous Cube in another epic quest story – She Kills Monsters – at St. Ambrose University.)

I admired the actors' natural funniness, which was free of broad, clownish exaggeration, and their ability to stay in character. (I only noticed three very minor breaks, which, given the wealth of humor in the script, I consider an outstanding feat.) And as with “Jacques”alope, the crew here was key to making the magic. I was impressed by the set, props, and unusual headgear that included the Minotaur's stylish horn/pompadour combo, Medusa's elaborate reptilian coif, and one shiny demonic sphere.

This Haus of Ruckus production repeated several elements established last time around. We enjoy the blurring of lines between Suspension of Disbelief and We Are in a Play, including squabbles about plot twists and a pronouncement about wanting more stage time. At one point, performers stepped down from the stage, and one casually said "Hi, Mom" to an audience member before resuming her character dialogue. Another time, on the wee stage, a prop knocked the labyrinth walls over. If Vo's astonished "It's just a set!" was a nimble ad lib, it fit neatly into the removable-fourth-wall concept. If scripted – well, it still fit. Oh, and there are puppets!

Green, Vo, and company have brought us another ingeniously entertaining experience. Seats are few at this venue, so heed my warning: You've gotta make it your quest to see "Pants" Labyrinth before it's gone. It is epic.

“Pants” Labyrinth runs at the Mockingbird on Main (320 North Main Street, Davenport IA) through June 5, more information is available by visiting TheMockingbirdOnMain.com, and tickets are available by e-mailing HausOfRuckusQC@gmail.com.