He Is Henry the Eighth He Is: The Prenzie Players’ “Henry VIII: All Is True” at the QC Theatre Workshop through October 13 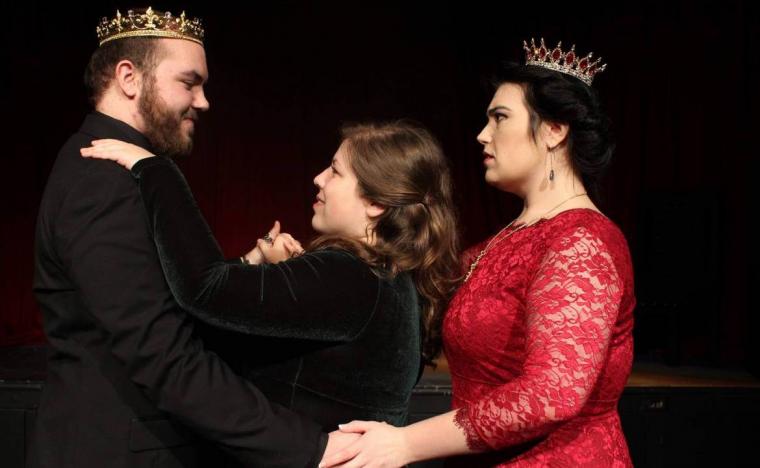 In the Prenzie Players’ current Henry VIII: All Is True, men outnumber the women in the cast. (Isn’t that typical of Shakespeare, really?) Yet while the performers in director Alaina Pascarella’s presentation were collectively strong, Henry VIII’s legacy, and this production, would have been significantly less memorable without the women.

The plot is rather straightforward, and you probably already know it. King Henry VIII (Payton Brasher) wants to have his marriage to Katharine (Kitty Israel) annulled so he can marry Anne Boleyn (Anna M. Schneider). The Catholic Church, however, doesn’t see fit to grant the requested annulment, and the relationship between the church of England and Rome begins to crumble.

Beginning right away with the prologue, Kate Farence (who played quite a few characters, all of them male) delivered a message that was strong, and definitely got a chuckle in her explanation that the show would be “two short hours” – and not including the intermission, she wasn’t wrong. Yet throughout the evening, Farence also brought an attitude to the stage I couldn’t quite figure out. At times, she seemed almost annoyed the audience was there, and as she removed the intermission sign with a scowl, her discontent was captivating. 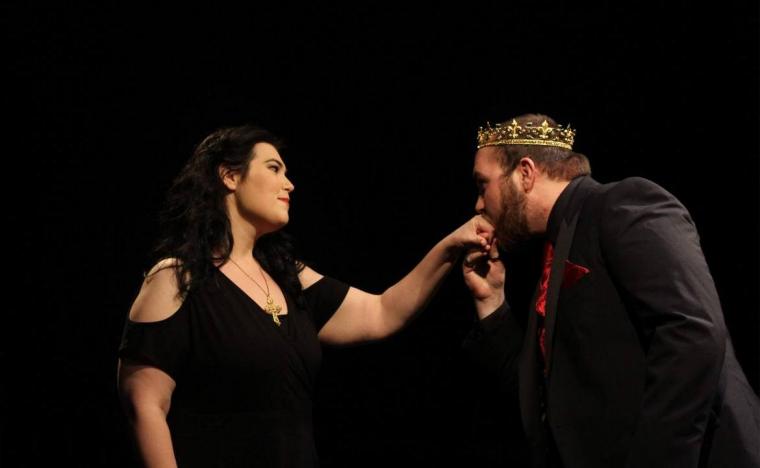 Brasher's titular king, meanwhile, was powerful, yet other than his being royalty, I didn’t see a whole lot of reason for two women to be so enamored with him. The actor certainly exuded authority, but this demanding Henry VIII, when you really come down to it, was kind of a jerk. But Israel brought her Queen Katharine to life and had an especially wonderful moment early on in the show when she and Brasher made eyes at each other and flirted while members of the court were talking. It would have been easy to miss, and I'm glad I didn’t.

While Israel’s Spanish accent felt off to me, she otherwise brought a subtlety and vulnerability to Katharine that worked extremely well for this production. In one particularly excellent scene, the queen displayed her dominance over Anne Boleyn, whom Schneider played as serious and slightly smug. It’s kind of a feat to act holier than thou when you are, in fact, the “other woman,” yet attitude radiated off of Schneider. As she sang “Greensleeves” to the queen to cheer her up (while being the only one there wearing green), the low blow certainly hit its mark as Israel and Schneider had a cat fight with their eyes. Pascarella used her QC Theatre Workshop location particularly well here, with the audience on either side of the action in what was essentially a throne room, and the long and narrow space blurred the line between the audience and performers. (Most patrons rose during Friday's coronation scene, and while I could have remained seated, my vantage point meant I would have missed the whole scene if I had.)

Pascarella's actors appeared quite comfortable connecting with the audience, with revelers diverging into the audience during a particularly boisterous party scene that offered Justin Hager’s sound design a chance to shine. Throughout the night, the mainly instrumental music was particularly interesting, and when the few songs with specifically chosen lyrics were playing, the lyrics (though not the melodies so much) really stood out – especially the ones that paired beautifully with a heartbreaking Israel moment in the second act. 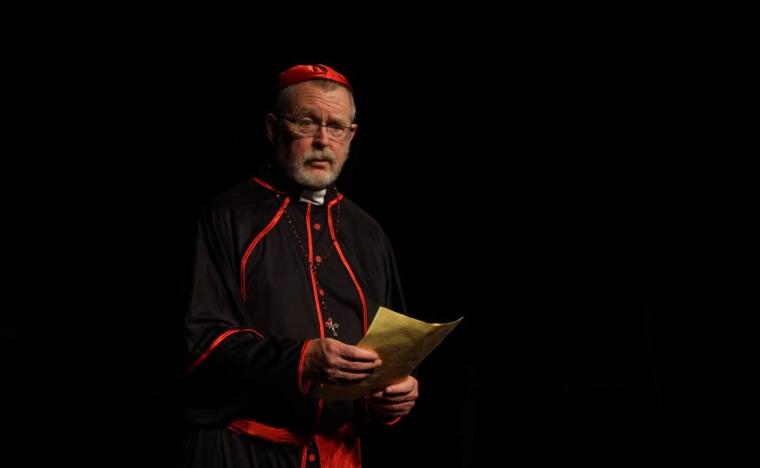 Not to be outdone by the Henry VIII women, Mischa Hooker took great command of the stage, and from the beginning, his strong performance, or rather performances, were easy to understand. Hooker’s three characters all seemed well-thought-out, though I felt most connected to him as Katharine’s gentleman usher, a role in which Hooker’s care was particularly touching.

Live theatre has the potential to be amazing and different with a production's every performance, and Friday night’s opening was no exception, featuring possibly the best soliloquy I have ever had the pleasure to witness. As Michael Carron’s Cardinal Wolsey contemplated his downfall from grace, Carron paused and, in that brief silence, Mother Nature provided an extremely large clap of thunder. That alone created a memorable dramatic moment. But within that same speech, Carron – who, again, was playing a Catholic – found himself standing next to an audience member wearing a Lutheran Student Center T-shirt. Consequently, Carron brilliantly directed his statement of “Lucifer” to her, which garnered gasps and chuckles from those whose sight lines allowed them to read the T-shirt. Carron didn’t back down from working the audience, and created impromptu moments of live theatre that will be hard to repeat or forget.

This production takes place in a timeless period full of dark costumes and personalities, and the Prenzie Players' cast was all-around skilled and committed, featuring some truly remarkable women. Taken overall, Henry VIII: All Is True was a satisfying night of history come to life.

Henry VIII: All Is True runs at the QC Theatre Workshop (1730 Wilkes Avenue, Davenport) through October 13, and more information and tickets are available by calling (563)484-4210 or visiting PrenziePlayers.com.