Heart and Soldier: The Mississippi Bend Players’ “A Green River,” at Augustana College through July 14 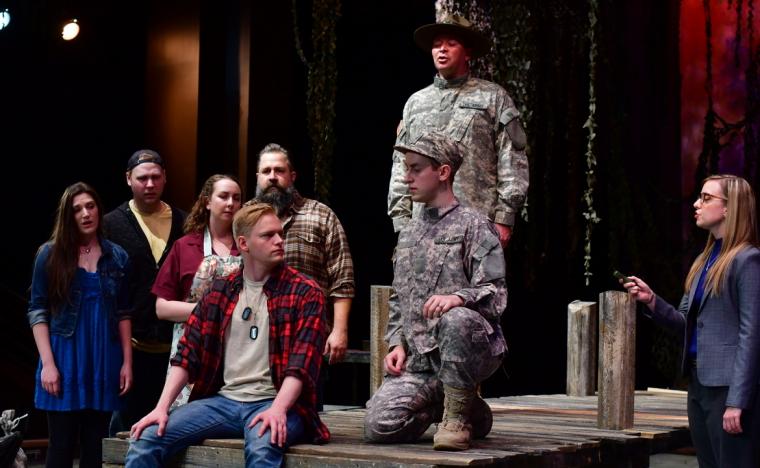 As a rule, I don’t give standing ovations. However, on Friday evening, I gave one of the most honest standing ovations of my life at A Green River, currently running at Augustana College care of the Mississippi Bend Players. Across the board, this show, directed by Philip Wm. McKinley, could have flown across a London sky via umbrella, because it was practically perfect.

Written by Aaron Randolph III, A Green River is a journey into the mind of Erik (Keenan Odenkirk), an American combat veteran who has returned from an intense deployment. Through this non-linear plot, we see Erik’s life journey from childhood to current-day reintegration pieced together through a brain suffering from post-traumatic stress. While Erik grapples with his new reality, he self-medicates with a copious amount of Busch Light.

Scenic designer Susan Holgersson’s attention to each element in the set was monumental. Before the show even began, the audience members seated around me couldn’t stop talking about how beautiful the set was, its main focal point a wooden dock complete with water-stained posts – Erik’s favorite quiet place on the Green River. The entire Brunner Theatre was decked out with camouflage netting that became marsh grass and leaves while doubling as a reminder of the war zone never far from Erik’s thoughts. The same was true for the sandbags that represented stones along the river. Lighting designer RaeEllen Walker added to the river experience with watery effects that were among the many lovely lighting choices for this almost-90-minute presentation. 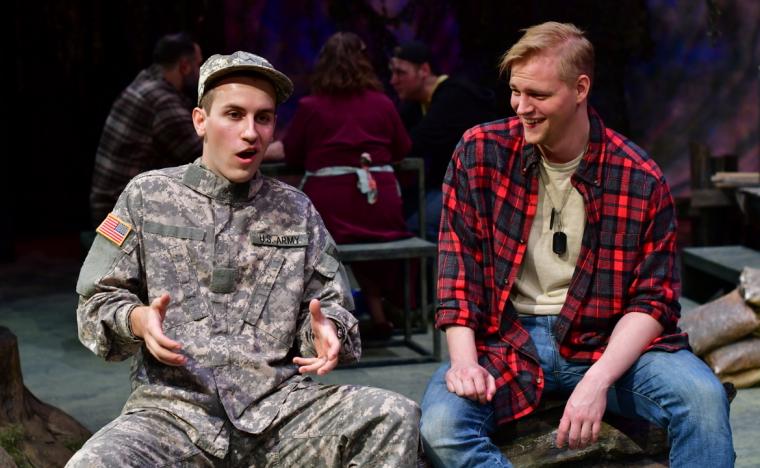 Holgersson’s set seamlessly transitioned from one area of the stage to the next as it became many locations in one: a bedroom, a yard, and overseas settings during Erik’s deployment. And McKinley’s decision to have all eight Green River actors remain on stage for the production's duration was a smart one. Characters not needed in Erik’s memory shifted to the background – not into suspended animation, but remaining in character in subtle ways. Shelley Cooper’s Counselor, for instance, took notes and quietly shifted through her papers while Erik's wife Amy (Marjorie Gast) brushed her hair, settling into a soundless bedtime routine. While these small actions never distracted from the main action, they also enhanced the beauty and completeness that was Erik’s life, as well as his inability to process his psychological wounds of war.

Odenkirk did a remarkable job in sustaining the unease that the role of Erik required; he was seemingly unable to fully relax on stage, even in the production's more comedic and tender moments. From the awkward shift of going from childhood friend to teenage more-than-friend to spouse, Gast brings a certain fortitude to Amy, who eventually becomes unable to do more than tiptoe around what’s left of the man she clearly loves. Yet you can’t help but feel that Amy would be the most supportive wife you’ve ever seen, if Erik would only let her in.

Erik’s support system extends to the aforementioned Counselor, whom Cooper portrayed as perky but not in an annoying way. Jeremy Mahr was a demanding Dad, but even through his criticisms of Erik’s football skills, you could sense the warmth Mahr brought to the character, and he was well-matched with Megan Cox’s nurturing Mom; Cox, here, is everyone’s mother. Last but not least on the supportive home front, Joshua Malone’s Jeff was Erik's convincing annoying-and-overeager kid brother, but there was obviously a lot of love between them. 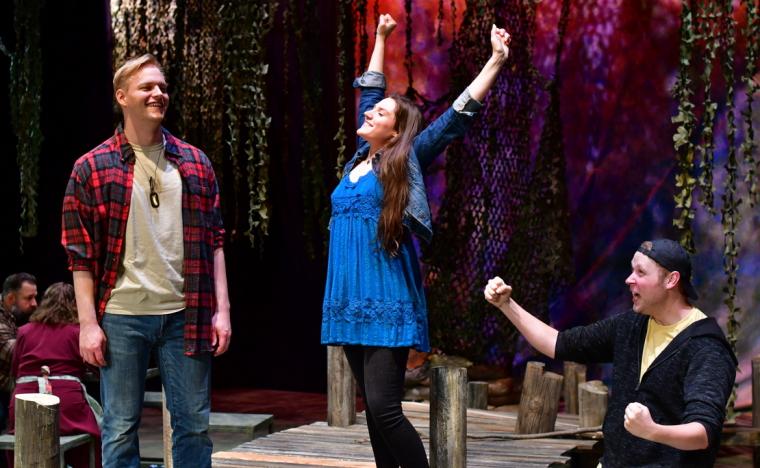 It was easy to see how reality shifted within the context of Erik’s mind when comparing little brother Jeff to Erik’s brother-in-arms Jason (Danny Fapp). The completely lovable Fapp, who radiated Southern charm, brought an intensity to the role of Jason that made him instantly irresistible, and the Jason-and-Erik bond made the foreshadowing of what was to come hard to swallow. Meanwhile, I probably shouldn’t write that Reader employee Mike Schulz’s intense Sergeant was my least favorite character in this production, even though he was – but only because his forcible barking into the forefront of Erik’s memories meant that Erik, who is so beloved, was slipping further away.

McKinley’s production had every little detail accounted for, and every memory was laced with softness to offset Erik's pain, especially in one specific moment involving a sandbag that was so very simple yet chock full of heartbreaking emotion and symbolism. What I appreciated most about A Green River was that Randolph and McKinley focused merely on telling Erik’s story and allowing his fictional truth – which certainly mirrors real soldiers’ current situations – to speak. This production isn’t political in nature, and it’s not a diatribe about war being unnecessary. It’s simply a heartrending insight into the mind of someone grappling with reality as he tries making sense of his life and actions.

This raw look at mental illness in veterans isn’t going to leave you in an emotionally comfortable place, yet every second, right down to the curtain call, will leave you breathless. And while I initially feared that the people for whom this story would particularly resonate may miss the opportunity to see the production, I ultimately came to realize that A Green River is for everyone.

A Green River runs at Augustana College's Brunner Theatre Center (3750 Seventh Avenue, Rock Island) through July 14, with discounted $10 admission for all active, reserve, and veteran members of the military and their families. For more information and tickets, call (309)794-7306 or visit MississippiBendPlayers.com.