Hoo-rain for Hollywood: “Singin' in the Rain,” at the Circa '21 Dinner Playhouse through November 2 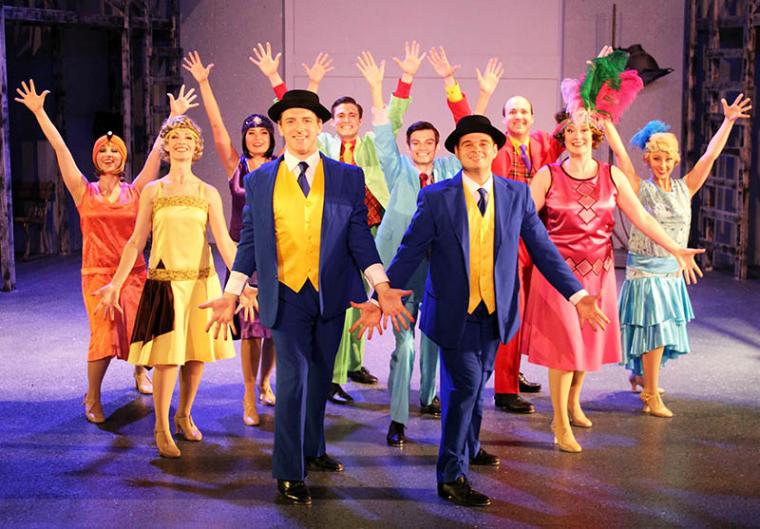 Christopher Russell, James Garrett Hill, and members of the Singin' in the Rain cast

The Circa '21 Dinner Playhouse's Singin' in the Rain will have you laughin' at clouds, no matter how dark the weather. The 1983 musical is based on the beloved 1952 film, with its screenplay (and the musical's book) by Betty Comden and Adolph Green, and Nacio Herb Brown and Arthur Freed writing music and lyrics for most of its tunes, many of which are borrowed from 1920s and 1930s films (by MGM, natch, which concocted this film). Thus, the show is in many ways a jukebox musical, and Circa '21's production uses the 2012 revival's script, which is a pared-down and shuffled version of the original.

Meanwhile, costume designer Gregory Hiatt, also the manager of Circa '21's costume shop Show Business, supplies much sparkle, with the creation worn by Lina Lamont (Sarah Mae Banning) at the top of the show especially stunning. All the outfits are lusciously in 1920s period, and Hiatt gets to stretch his wings in an Act II number by taking the guys out of their blacks and browns and into a broad, vivid palette. 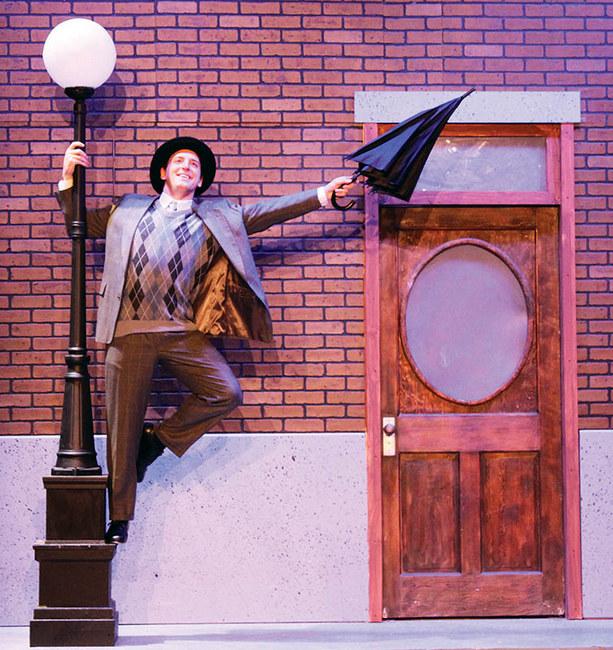 Singin' in the Rain's premise is based on a real-life change in the film industry, because when technology brought sound to the screen and movies became talkies, actors had to look good and sound good. Ironically, though, sound issues at Wednesday's preview performance made some of the dialogue in the first scene inaudible. At times, the playback of cheers and applause of the film-premiere fans overwhelmed the lines of red-carpet commentator Dora (Shelley Walljasper) and her interviewees, including stars Don Lockwood (Christopher Russell) and Lina. As the action switches to a flashback to Don's stage beginnings, though, Tessie (Megan Orlowski) sets the vaudeville scene effectively in a short, exuberant burlesque bit devised by director Reines. The lyrics were mostly lost under the loud music, but she was a visual delight as she swiveled her tassels – set about a foot lower on her costume than, given the period, I would have expected (but then, this is the Midwest) – and I'm sure the sound bugs were squashed by Friday's opening night.

Don and his buddy Cosmo Brown (James Garrett Hill) further enliven the stage with the outstanding (and borderline hazardous) "Fit as a Fiddle." Their amazing dancing, acrobatics, and prop-handling, singing all the while, is so breathtaking it made me wish that Don had kept leaping about onstage rather than becoming a mostly stationary film star, but that's not how the story goes.

Russell is perfect as Don, who, though good-natured and talented, is not quite as bold as the dashing heroes he plays. (He actually seeks refuge from fame, and feels threatened when he meets a legitimate stage performer.) Don is not only a pleasure to watch, but also a sympathetic character because, unlike Russell in the role, the character is not perfect. 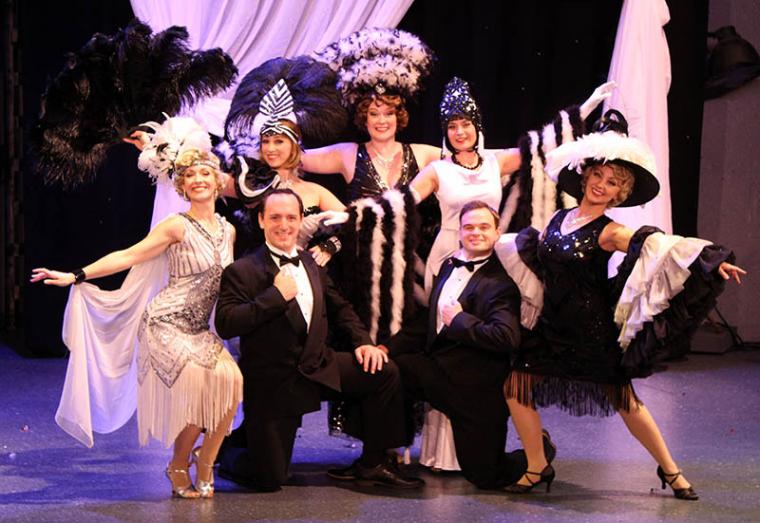 Banning portrays his onscreen leading lady, who has dazzling looks, a dim-bulb mind, and a screech somewhere between a lonely cat and an angry seagull. She carries it off with wonderful comedic skill. Lina doesn't handle her gifts or curses well, and although she is prickly – sometimes drawing blood – I felt for her, too. When the film-sound bombshell hits, she doesn't want to be blasted out of her career. Would you?

Erin Churchill plays the newcomer Kathy Selden with a golden throat and feet to match. Churchill is very appealing, with a strong, spirited presence, and I was cheering for Kathy to achieve deserved fame as a performer, instead of being relegated to perform as a ghost-singer who is herself unsung. Speaking of second bananas, while Hill plays one as Cosmo, he's assuredly one of the best of the bunch. The performer is smooth, hilarious, and has all the moves; I'd love to see him soon in a leading role.

Russell performs the classic title tune with the requisite streetlamp, curb, and gusto aplenty, with the rain effect nicely done. (Don't worry; nobody gets wet.) My admiration for him increased when his unruly mic decided to sit out the entire number, and he danced and sang through the downpour without amplification. I love a trouper. I also particularly enjoyed "Good Morning" with Churchill, Hill, and Russell, not that any of the show's songs were lackluster. Each member of the ensemble is as enjoyable as those in bigger roles, and the whole cast is a blast when they're onstage together.

Singin' in the Rain is all you could want in a musical stage diversion, and will put the sun in your heart.

Singin' in the Rain runs at the Circa '21 Dinner Playhouse (1828 Third Avenue, Rock Island) through November 2, and more information and tickets are available by calling (309)786-7733 extension 2 or visiting Circa21.com.