Hope Is a Thing with Wings: “I Never Saw Another Butterfly,” at the Black Box Theatre through February 1 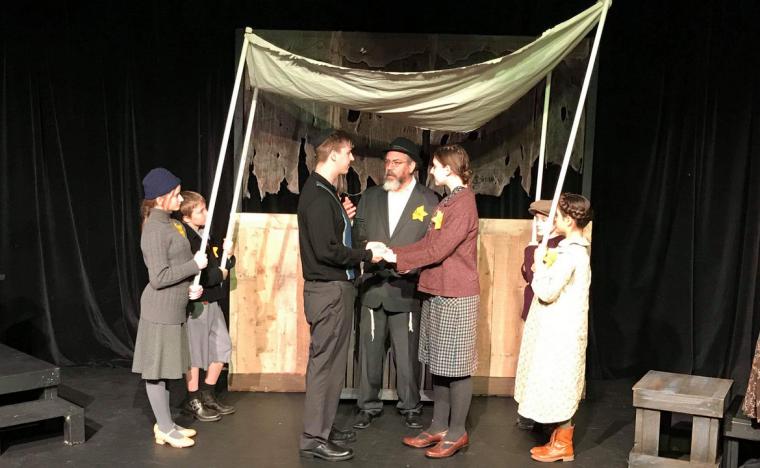 There was a moment during Friday’s conclusion to the Black Box Theatre’s latest production, I Never Saw Another Butterfly, in which one of the child actors realized the artwork he was holding was upside down, so he turned it around. A seemingly small action, but an absolutely honest one. Children often set out to right the wrongs they see in the world, and while I’m certain director Lora Adams didn’t plan this incident, that tiny gesture drove home the reality of the night’s story for me. Even in a place full of horror, children continue to learn, grow, and create beauty, because that’s what children do.

I Never Saw Another Butterfly, written by Celeste Raspanti and presented at the Black Box as an emotional one-act, follows young Raja (Laila Haley) through her memories and time spent in Terezin – the walled Czech town turned concentration camp – during World War II. Haunted memories more akin to nightmares are interspersed with stories of people Raja encountered and actual poems written by the children of the camp. Throughout the evening, though, we’re never far from a reminder of the solace art can provide. Even in the stuff terrors are made of, art can help people cope.

Haley’s voice frequently punctuated the show, often proclaiming her character’s name as a way to cement herself to reality. As we in the audience watched black-and-white videos that set the scene and Phillip Dunbridge’s announcer read the names and ages of Terezin children who perished, Raja is ever-present. Haley carries a big weight on her shoulder in this production as Raja’s memories are all the world will hear of some of these individuals, and the 17-year-old is up to the challenge. While her emotional qualities tended toward intensity, there was also a subtlety to her performance, particularly whenever Haley’s hand trembled with fear, as though reliving these moments shook her to the core. 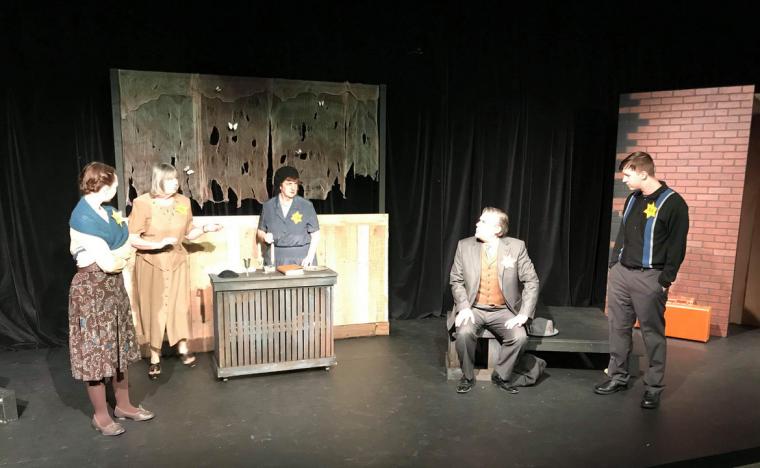 Some of Raja’s memories played out as nearly melodramatic, which I wasn’t quite expecting, as when a family gathering for Shabbat was presented with an emotional quality that didn’t seem to reflect the seriousness of the situation. But Adams cast some familiar faces to play Raja’s family, with Mischa Hooker and Patti Flaherty appearing as Raja’s parents and Dee Canfield bringing her Aunt Vera to life. The trio’s silent joy and anguish as the rabbi (Jim Harris) married Pavel (Justin Ruefer) to Irca (Dorothy Turner) a mere hour before they left on a transport to Auschwitz spoke volumes more than their verbal lines.

Raja finds support and hope from teacher Irena (Isabel Trulson), the first person at Terezin to offer her comfort. Trulson’s performance was a real bright spot as Irena became the lone voice of hope during Raja’s time in Terezin. The Trulson-and-Haley dynamic was palpable; even through tears of sorrow, they conveyed some of I Never Saw Another Butterfly’s more important lessons. As Raja found friendship and love, represented in the production by Jaclyn Marta’s two characters and Ethan Mason’s role as Hanza, it was her relationship with Irena that felt the most honest.

Where this production managed to simultaneously tug on heartstrings and elicit smiles was with the cast's small group of children: Ethan Dunbridge, Grayson Dunbridge, Marley Haley, and Wrigley Mancha, who, for the most part, remained nameless representatives of every one of the 15,000 youths interned in the confines of Terezin. Occasionally, someone in this little group wouldn’t be able to find their light (designed by David Miller) and would speak their lines in shadow, but even that felt artistically relevant, since the children portrayed the voices of ghosts of the past. 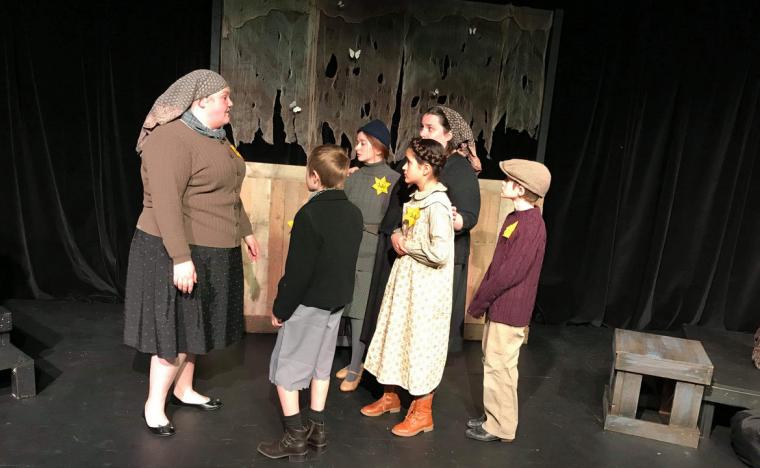 It was unfortunate, on Friday, when latecomers left the curtain to the lobby open behind them as they entered, producing a bright street light in my peripheral vision. Yet that constant reminder of reality, however annoying, kept me rooted and able to avoid succumbing to overwhelming grief at the tragedy before me.

The set, designed by Adams, was generally simple, with a few platforms and brickwork painted by Tom Vaccaro and several butterflies hanging from a ragged piece of cloth. The children of Terezin thought butterflies to be a sign of hope and, while I don’t feel I Never Saw Another Butterfly is overly hopeful, this production is particularly unique. So many historical works focus on tales of survival, whereas Raja and her memories focus instead on how these children and adults alike lived, celebrating courage, art, and education in the midst of horror. It's a pure-and-simple reminder that people will always find a way to keep going.

The Black Box Theatre, with help from the Jewish Federation of the Quad Cities, has given our community this play of remembrance to commemorate International Holocaust Remembrance Day. And for me, the takeaway of I Never Saw Another Butterfly is that art has always been an excellent coping mechanism. What message you take away, however, is yours to decide.

I Never Saw Another Butterfly runs at the Black Box Theatre (1623 Fifth Avenue, Moline) through February 1, and more information and tickets are available by calling (563)284-2350 or visiting TheBlackBoxTheatre.com.