A Horror with No Names: “Veronica's Room,” at the Black Box Theatre through April 16 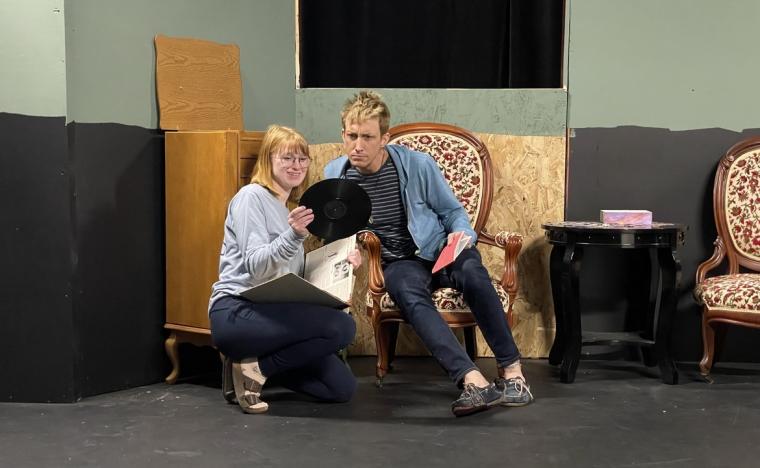 Ira Levin is the perpetrator of Veronica's Room, an über-creepy, deeply disturbing play first produced in 1973, and currently running at Moline's Black Box Theatre. You don't know Ira Levin? You've heard of his novel Rosemary's Baby, right? That book, and most of his others, among them The Stepford Wives, The Boys From Brazil, A Kiss Before Dying, and Sliver, have all been adapted as movies. Maybe you're familiar with his play Deathtrap, which was also translated into film. I've read and reread most of his books. (And you should read Son of Rosemary, a slightly tongue-in-cheek sequel to you-know-what – it's clever and horrifying.)

But what about this play?, you're asking. I'll get to that.

Levin's plots are original and varied, and he uses many genres as vehicles, including horror, suspense, techno-thriller, and dystopian. (The rascal even appropriated a real-life genocidal madman and made him a major character in one book.) Underneath plot and genre, his typical theme concerns immoral (usually male) people terrorizing (usually female) victims – either for profit, or to cater to their egos, or to satisfy their hunger for power, or to fulfill a pact with Satan. Or whatever.

Umm … the play? you're still asking. Yes, yes. You see, Veronica's Room fits that theme, and that's pretty much all I'm willing to tell you about it. "Dark" and "shocking" aren't strong enough words. And, as I often have, I beg you not to read any synopses before attending … .

Oh, all right. I'll tell you the premise, considering it's in the show's publicity. A college couple meets a married pair who are caretakers of a house where an elderly woman is living out her last days tormented by her sister's anger. But it's all in her mind, as the sister has actually been dead for decades. The young woman looks like that sister, and the caretakers ask her to pose as her and speak to the dying woman to give her some peace. How's that for a weird favor? Would you do it?

As a Levin (and theatre) fan, I was very glad that Veronica's Room director and Black Box co-owner Lora Adams chose to do this play. It wasn't a book or a movie, and for years I've wanted to see it – not just read the script. And at last, during Thursday's opening-night performance, I did see it.

So you've got playwright Levin, and you've got the Black Box Theatre's talented staff and crew, so you're already pretty much guaranteed a satisfying experience. But with the gifted cast Adams has assembled, it's actually an outstanding one. 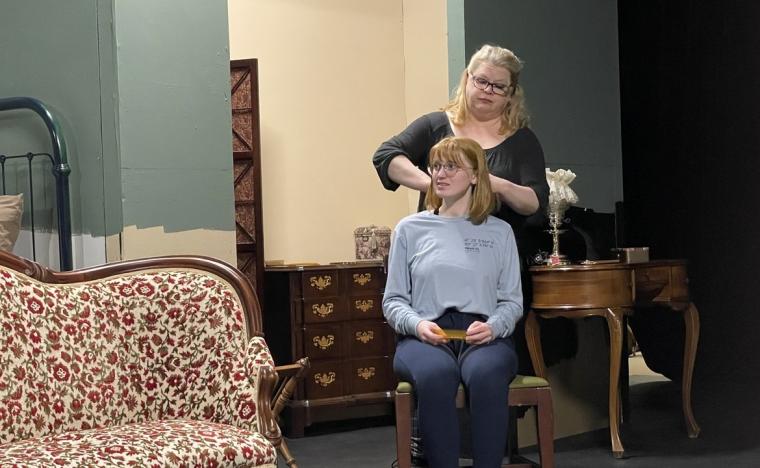 It's common in theatre for one actor to play multiple parts, such as the performers cast as the Clowns in The 39 Steps, and the man playing Man in The Turn of the Screw. In musicals, ensemble members often portray a number of different people. And generally speaking, none of these characters are given actual character names in the programs. So it is, too, in Veronica's Room.

A frequent area stage presence, the accomplished Wendy Czekalski often sings and performs comedy, and does both expertly. Here, as Levin's unnamed Woman, she shines in drama, portraying a wide array of emotions and temperaments – sometimes in succession; at other times, multiple ones simultaneously. She is warm and irresistibly huggable … and then, you find yourself wanting to run screaming from Woman's cold disdain. In her role as Girl, Adrienne Jane Evans, as a young woman herself, has less experience than the others, but no less talent. She, too, can adroitly shift and blend moods in a natural manner, and Veronica's Room allows Evans to be enthusiastic, shy, seductive, nervous, assertive, conflicted, and terrified. She even pulls off amazing green-polyester bell bottoms.

Don Faust, who plays Man, is a veteran of many area productions, and a playwright, as well. He has a strong presence here, physically and energy-wise – I could feel him in the room, even when I wasn't looking at him. Vocally, he's very versatile. And when Faust displays Man's mercurial temperaments, the contrast is effective and startling. Meanwhile, after so many years of admiring his talents, I'm running out of laudatory adjectives for the extraordinary Adam Cerny, who enacts Levin's Young Man. After closing night of Rabbit Hole at the Playcrafters Barn Theatre, Cerny had only 11 days to rehearse before the Black Box's latest show opened, and beyond being a quick study, he is versatile and captivating. When is he not? (On a personal note, I was happy to share the Playcrafters stage with him in Levin's Deathtrap in 2017, and I gotta say – he killed. Me.)

Designed by Adams and built by Michael Kopriva, this production's set is marvelous. As she frequently has, Adams ingeniously created an attractive playing space dressed with period items. It holds bulky furniture, yet there's still plenty of room for actors, and it suggests the spaciousness of the mansion beyond.

In her pre-show remarks, Adams said she normally invites audiences to "enjoy" the show, but couldn't use that word for this production. But as far as this horror fan was concerned, she was wrong. Levin's play is intensely twisted, and I loved it. A toast to Veronica's Room – still creepy after almost 50 years.

Veronica's Room runs at the Black Box Theatre (1623 Fifth Avenue, Moline IL) through April 16, and more information and tickets are available by calling (563)284-2350 and visiting TheBlackBoxTheatre.com.