How Swede It Is: Quad City Music Guild’s “Mamma Mia!”, at the Prospect Park Auditorium through July 18 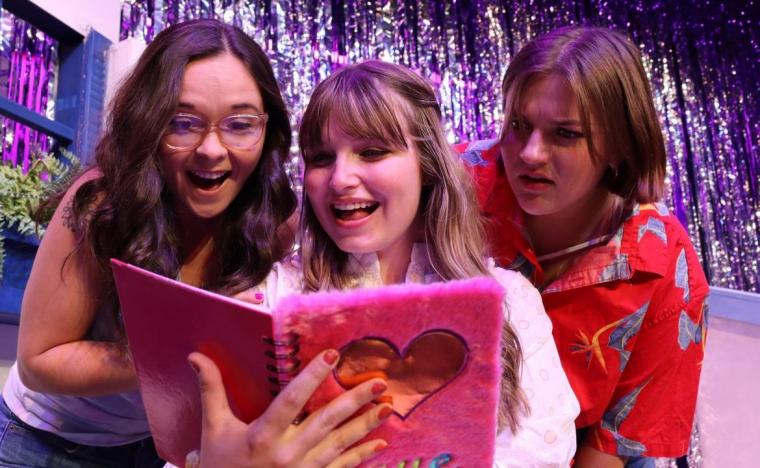 It occurred to me, before Saturday’s performance of Mamma Mia!, that Quad City Music Guild is one of the only area theatres that doesn’t let you bask in the scenic design before a show begins, preferring instead to keep it tucked behind the curtain. A beat-up mailbox in the corner of a little dock was the only preview of the show's small Greek Island, and we were left with a simple disco ball and some accompanying sound design to set the mood. But there was palpable energy in the air: patrons excited to be at the Prospect Park Auditorium for the first time in a long while, delighting to be singing along to pre-show music.

Turns out waiting for the perfect moment to unveil the scene was a good call, because once Mamma Mia!'s overture started and the curtains opened – my my – it was nothing short of theatre magic. Brittney and Robert Crist’s superb lighting design and Luke Vermeire’s scenic design were a pair akin to peanut butter and jelly: good on their own, but even better together. By the time we saw Sophie (the super-sweet Olivia Lyman) mail out three invitations to her wedding to the three men who could be her father, and then spill the news to her best friends Ali (a flirty and fun Alyssa Castro) and Lisa (the hilarious Lauren Larson), it was clear that director Colleen Houlian’s production was going to be funny and not take itself too seriously. When all three guys eventually show up, Sophie’s mother Donna (Christina Myatt) must face the trio from her past a mere 24 hours before her daughter is to be married … so hijinks obviously ensue. And all this, of course, set to your favorite tunes by Swedish pop group ABBA. 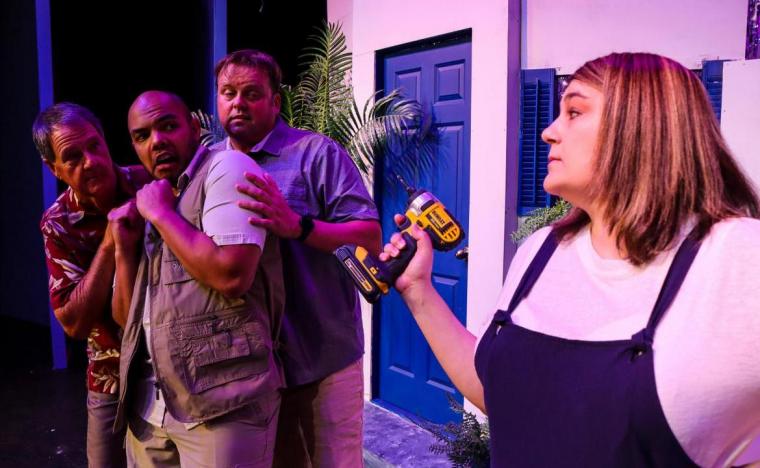 Let’s take a minute to talk about this production's music, because Lyman and Myatt were a powerhouse pair who sang the heck out of their songs. In truth, music director Bob Manasco had the entire cast singing beautifully to the ABBA hits, and the pit orchestra was in perfect sync with them. Though we first meet Calhoun's entire ensemble during the titular “Mamma Mia,” they were never absent for long; if the music was playing, the performers could be heard singing backup even if they were nowhere to be seen. This was a great decision and it worked nearly all of the time, only feeling off during “Our Last Summer.” Myatt and Mark Leo McGinn (as Harry) were great, but the background vocals sort of stole focus here and there. (I personally feel as though this was simply a case of the more bizarre-on-their-own vocal parts being set to slightly higher microphone levels than necessary.) If that was an example of where Music Guild’s production went wrong, though, let me continue with all the ways it went right.

As this production was delayed by a year, it's no wonder that Houlian had even the tiniest details effectively thought out. For example, I really appreciated how Sophie and her friends so aptly mirrored Donna and her dynamo sidekicks Tanya (a lofty but lovable Heather Herkelman) and Rosie (the comedic, jubliant Chris Castle). In a show with a cast of 25, it felt as though every actor knew their back stories well and had actual reasons for being on stage. And I cannot tell you how refreshing it was to see a large-cast show. While I totally get the decision, in the COVID era, to stage intimate productions with few actors, you just can’t top the energy of a big ensemble. 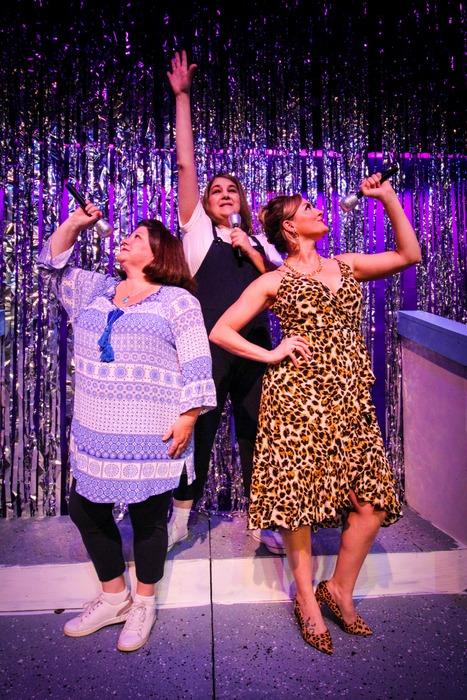 Sprinkle Beth Marsoun’s choreography onto this group and Music Guild's Mamma Mia!, which was already comedic, crossed into the realm of where legends are made. Across the board, the dancing was smart, rhythmic, and staged exceptionally well, and from time to time, it managed to showcase everyone. But arriving near the end of act one, “Lay All Your Love On Me” was the production’s highlight, and the audience's reaction was audible as a swim-flipper-clad group came to sweep Sophie’s financé off for his bachelor party. If you’ve seen the film adaptation or another theatrical staging of this musical, let me clearly say this: Marsoun has set a new flipper-dance standard.

Mamma Mia!, all around, was just an excellent evening of entertainment. Did any couple on the stage have any measurable amount of chemistry? No. Did it matter? Also no, because they were all seemingly having fun, and the show is mostly about the mother-daughter relationship anyway – and wow, did Myatt and Lyman deliver in spades. From the opening moments to the curtain call's disco dance party that featured costume designer Connie McGinn’s best surprise of the night, it’s been ages since I’ve left the theatre so thoroughly entertained. (The only noticeable improvement that could be made to this production would be to project the lyrics alongside the performance; given that patrons are singing along anyway, they might as well be encouraged to sing the right words!) Quad City Music Guild’s Mamma Mia! is an unquestionable success and a production people will talk about for years to come.