Hue-dunit: “Clue: On Stage,” at the Richmond Hill Barn Theatre through October 17 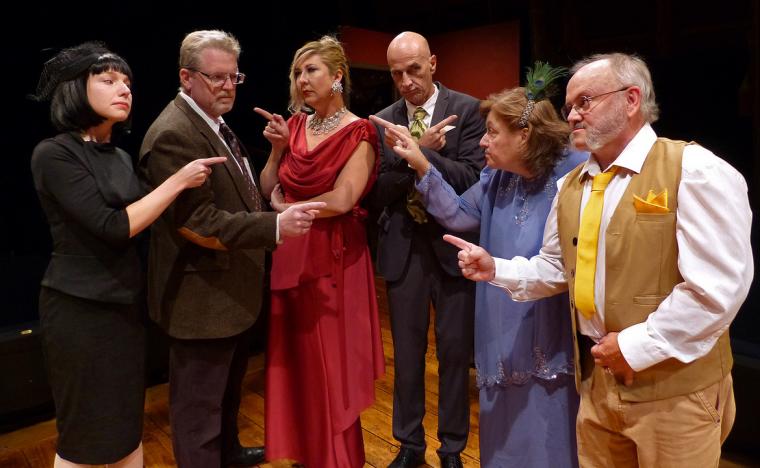 I love playing board games. I also love a good night at the theatre, which made Saturday night’s production of Clue: On Stage the perfect combination to bring a smile to my face. Luckily, director Dana Skiles’ Richmond Hill Barn Theatre production lived up to my expectations and provided the anticipated zany and farcical evening.

Let’s just get my one truly negative criticism out of the way, shall we? The scene changes were tedious. This is in no way meant to disparage the stage crew (Terri Nelson, Bradyn Kyle Jagers, Mac Morton, Jim Strauss, and Vicky Jones), because they did a pretty bang-up job. Have you ever played the board game Clue? There’s the kitchen, dining room, parlor, billiard room, and library, just to name a few locales, and with an in-the-round stage space such as the Barn's, there’s only so much you can do without making lengthy scene changes necessary. Even if a few seconds could have been routinely shaved off by not waiting for a line of actors to leave in single file before the crew entered to rearrange furniture, it wouldn’t change the fact that in an otherwise succinct production, we spent at least 10 minutes watching the stage crew and listening to Larry Lord’s suspenseful sound design.

Happily, though, the stage action was enough to keep your mind occupied, if not to figure out whodunit (fans of the 1985 cult-classic movie will certainly recognize many lines and scenes), then to merely escape reality with some broad comedy. If you’re familiar with the board game or movie, six guests with colorful pseudonyms arrive at the Boddy Mansion after receiving mysterious letters inviting them to dinner. As it turns out, all six guests are informed by the butler Wadsworth (cunningly portrayed here by Eric Landuyt) that they’re being blackmailed. As the evening’s escapades continue, a series of murders occur, leading to a flurry of accusations: “It was Miss Scarlet, in the conservatory, with the rope.” (It wasn’t, mind you. That’s simply an example.) Landuyt carried the evening, setting up each scene perfectly and maintaining his accent well; he’s an incredibly likable actor. But thankfully for Landuyt, and for us, the rest of the cast brought heaps of goodness, as well. 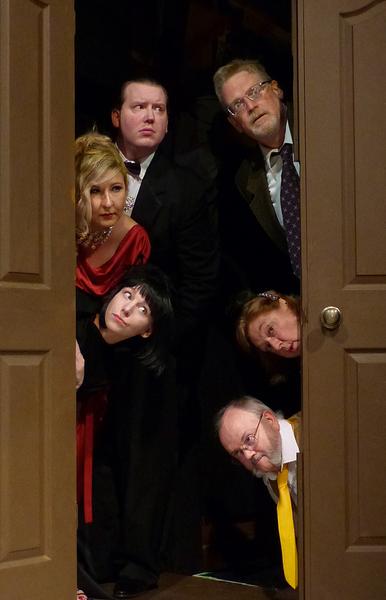 Lest you’re someone who gets confused by who’s who in large-cast productions, Clue's dinner guests are clad in attire to help us swiftly track exactly who they are. For instance, Jackie Skiles’ Mrs. Peacock sports a prominent peacock feather in her hair. And Skiles was a hoot, helping the guests break the ice at the show’s beginning, and later, when she might have been inadvertently poisoned, delivering a topnotch reaction. Though Jessica Moore’s stage-combat skills left a lot to be desired (and I don’t think it was just the angle with which I viewed them), her portrayal of Miss Scarlet added a fantastic presence to the night.

Colonel Mustard, effectively played by Jim Skiles, was often confused by what was going on. As the Colonel blundered his way through the evening, he became one of its more endearing characters, and I found myself paying close attention to him. (The Colonel had some of the more tongue-twisted conversations throughout the show, but Skiles handled his lines with ease.) Also attention-grabbing was Kady Patterson as Mrs. White. Her non-verbal reactions were often just as funny as her words, and whether she had flames on the side of her face or her eyes just bugged out a bit, Patterson provided excellent comedic timing throughout. 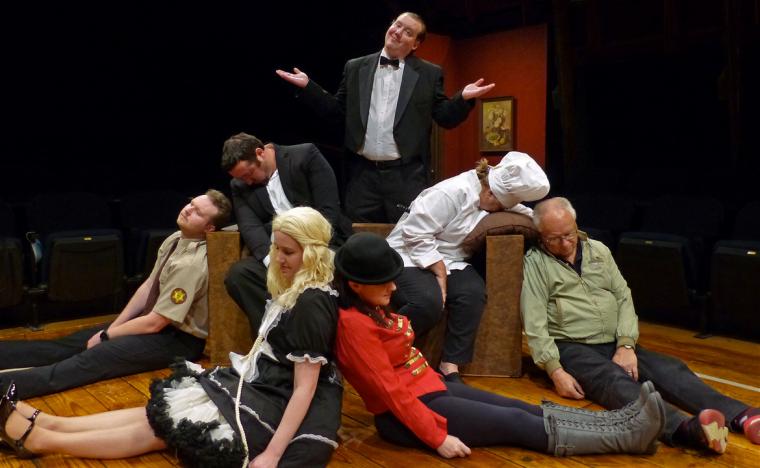 I thought Greg Kerr’s tie could've been more stereotypically green to aid in recognition of his Mr. Green character but that didn’t stop his performance from being full-throttle fun, as was David Beeson’s adept take on Professor Plum. Truly, all six guests at this dinner-party-gone-wrong seemed to have a grand old time on stage, making it very easy for our audience to willingly embrace the story’s crazy ridiculousness.

When accusations started flying deep in the second act, the cast did a phenomenal job rewinding and recapping all possibilities. Mad kudos to Landuyt, who had to keep many scenarios straight, and to Matthew McConville. who, while playing the Chief of Police, burst in with a different name and accent every time. (If you see the play, and you absolutely should, make certain note of McConville’s multitude of punny names.)

As with any seat at Richmond Hill, you feel like you're right in the action, and while that can be incredibly fun, it can also mean that you miss a moment or two. I, for instance, am sad that I chose a seat from which I was unable to see who was at the door when it opened. But the overarching fun of the evening way overshadowed that minor disappointment. This production of Clue: On Stage is precisely the game come to life, and it’s every bit the comical murder-mystery experience you’d expect.

Clue: On Stage runs at the Richmond Hill Barn Theatre (600 Robinson Drive, Geneseo IL) through October 17, and more information and tickets are available by calling (309)944-2244 and visiting RHPlayers.com.