Humans Being: “Rabbit Hole,” at the Playcrafters Barn Theatre through March 27 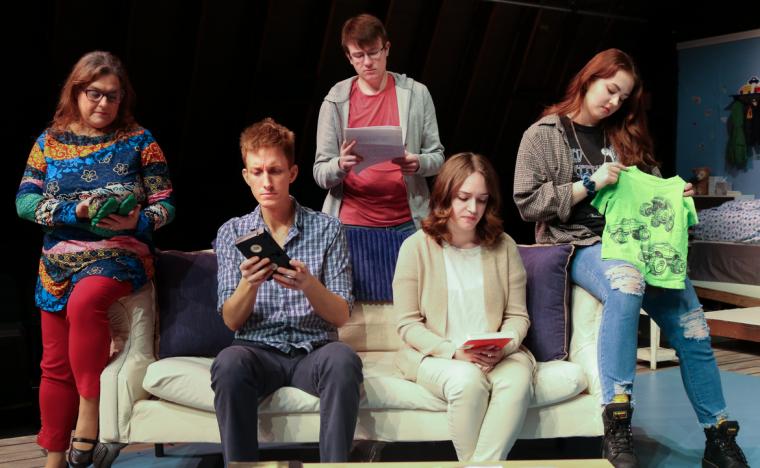 When faced with tragedy, a family can react in myriad ways. This was definitely the case for the characters in the Playcrafters Barn Theatre's Rabbit Hole. Before seeing Saturday’s performance of David Lindsay-Abaire's drama, I came into the show thinking it was going to be highly upsetting and emotional – but this certainly was not the case. While the production did have some moments that were quite tense and sad, these weren't the constant moods, and the playwright’s script and the Playcrafters company built a narrative that was human – not overdoing the tragedy, not overdoing the comedy, but existing in a way that was approachable, simple, and touching.

Lindsay-Abaire's 2007 Pulitzer Prize-winner centers around Howie and Becca (a husband and wife played by Adam Cerny and Elizabeth Melville), Becca’s sister Izzy (Abby Bastian), and their mother Nat (Yvonne Siddique). We follow this family in their coping with, and recovery from, a sensitive family tragedy, and an additional character shows up in the form of Jason, a teenager connected to the cause of a horrific accident. During Rabbit Hole's first weekend at Playcrafters, Jason was played by Noah Stivers, who had to fill in on short notice for Drew DeKeyrel, who will resume the role over weekend two. This time constraint, however, did not stop Stivers from giving a terrific performance – and I wish DeKeyrel well as he rejoins the company for their second weekend. Although not an ideal situation, what a unique experience for both the actors and the audience to have two different Jasons in one show.

Director Jaclyn Marta's show was well-cast throughout, with all of its characters believable and the actors creating complex figures. Cerny and Melville, neither of whom is a stranger to Playcrafters, portrayed Howie and Becca wonderfully, with Cerny’s multi-faceted characterization especially impressive. He portrayed a grieving father realistically – to reference the actor's program bio, his hard work in rehearsal getting into “dad mode” clearly paid off – and Cerny's notes of defensiveness, wit, impending breakdown, and softness were all marvelously rendered pieces of Howie’s persona. 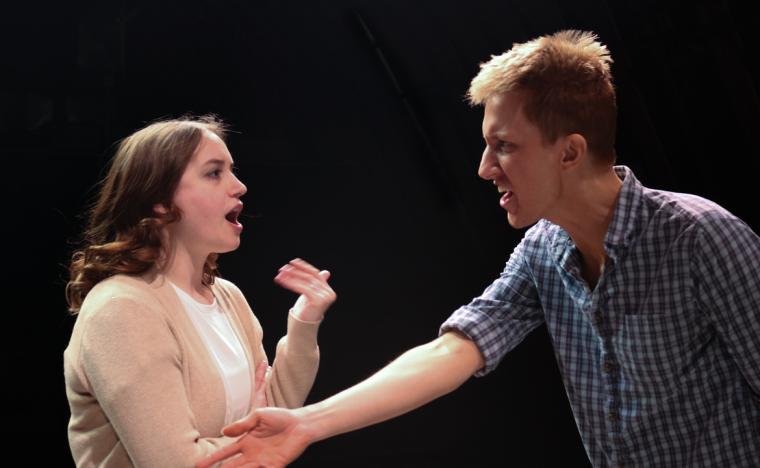 As Izzy, Bastian delivered another sensationally multi-dimensional portrayal. From Bastian's first moments onstage, we were presented with Izzy's lazy and nonchalant energy, which was refreshing given the play's intense subject matter. And as Rabbit Hole went on, sympathy and maternal warmth also crept into the mix while the same characterization established at the play’s start was maintained. The sister of a grieving parent, Bastian's Izzy was likable and vital to the play – a great performance.

Another character boasting some comedic elements was Siddique’s Nat. There was a scene about halfway through the show in which the family was sitting around the table and Nat just kept talking, with Siddique providing the right amount of annoyance (and intoxication) necessary for the character and situation. Nat’s relationship with Becca, meanwhile, was touching, as we learned that the former went through a tragedy similar to her daughter's. This connection added a large weight to Rabbit Hole, especially during the scene in which they were both cleaning out a room in the house, packing up memories, and trying to move on. It was an excellent peek at their mother-daughter dynamic.

On Saturday, there were very few moments of overacting on display – which would have been easy to lapse into in this sort of drama. Instead, the production felt true and stayed simple and accessible. However, one element that broke the realistic feel was the pantomime. One of the downstage corners of Playcrafters' thrust stage housed an invisible entrance to the house, which was not a problem, as the audience could easily suspend their disbelief. However, while the actors all pantomimed the door, they all did so in different ways, and it took the audience out of the “real world” Rabbit Hole was conveying. (I personally believe it would have been just as effective to have the pantomime left out completely.) A couple other areas of the stage could have been utilized differently, too; the upstage-left corner was not used at all, while the upstage-right corner felt cramped. That being said, the scenic design and staging were largely great, and fit the action of the play generally well. 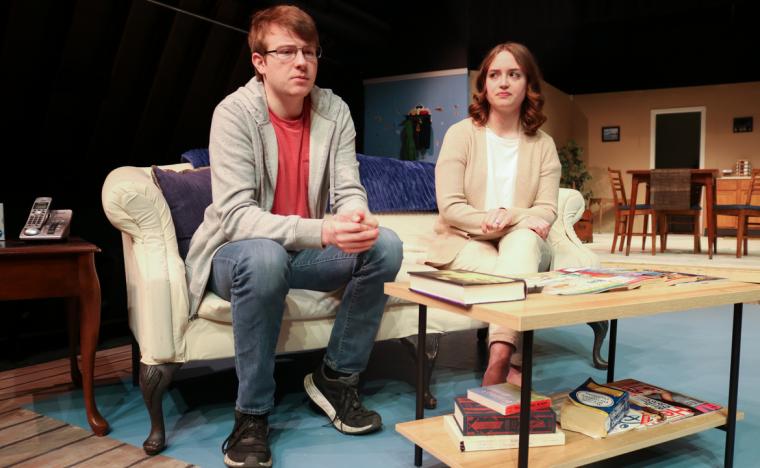 As opposed to the nonexistent door, Mike Turczynski’s lighting design broke away from realism in a superb way. Rabbit Hole could easily be produced with very basic lighting, but this production added more variety that made the show all the more effective. Turczynski isolated the small-cast scenes in certain areas of the stage nicely, while adding shadow and splashes of color that gave hints of expressionism. The lighting transitions, meanwhile, were smooth and clean for the most part (although some effects were a bit choppy), and some of the most impressive technical elements came during the scene-transition blackouts. The soft blue hue that covered the space was made more beautiful by the somber music put in place by Alex Richardson, and the set included a practical fridge that spilled light onto the stage – a simple choice, but quite cool.

Each character in Lindsay-Abaire's drama dealt with their tragedy in different ways: some were ready to move on quickly; some were more emotional; some were caught in between. Themes of parenthood, grief, and sympathy wove throughout these people, and all of their experiences intersected beautifully. And on a personal note, I should add that this marked my first visit to Playcrafters – and I was impressed. The barn space is lovely and homey, the company’s staff were welcoming, and everyone involved in Rabbit Hole produced a quality night of theatre that portrayed tragedy in complex yet human ways.

Rabbit Hole runs at the Playcrafters Barn Theatre (4950 35th Avenue, Moline IL) through March 27, and more information and tickets are available by calling (309)762-0330 and visiting Playcrafters.com.