Hypno-Test: “An Oak Tree,” at the Mockingbird on Main through December 5 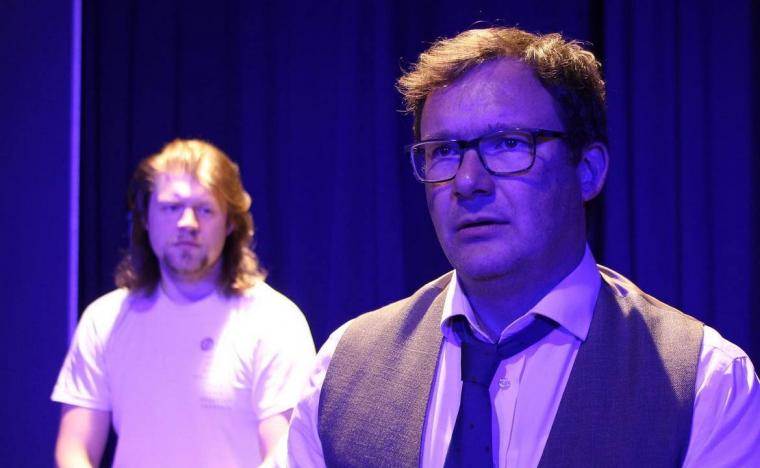 Ben Gougeon (with director Max Moline) in An Oak Tree

Friday night’s production at the Mockingbird on Main started with a moment of silence for Broadway’s legendary composer/lyricist Stephen Sondheim, who passed away earlier that day. Yet while I’m sure a similar moment was shared across any number of theatres around the globe, what happened afterward was a once-in-a-lifetime experience.

Therein lies the premise of An Oak Tree: One actor, who portrays the Hypnotist (Ben Gougeon), is rehearsed and prepared to perform, while the other actor, who plays the Father, has never even read the script. The second actor is a different one every night of the production's run. And judging from the program, no matter which night you attend, something exciting will happen, because Father is – or will be – played by a wide range of renowned QC theatre talent. (Anthony Hendricks and Kira Rangel appeared as Father on Saturday and Sunday, respectively; the December 3 through 5 presentations will feature, also respectively, Daniel DP Sheridan, Roger Pavey Jr., and TJ Green.) Honestly, offering a package deal to come see the show a subsequent time would be smart, because, I, for one, would absolutely see An Oak Tree again just to resolve my unanswered questions.

Directed by Max Moline, An Oak Tree's stage was literally set by Gougeon during the pre-show. This was a nice little touch and hooked my interest. (As if the premise alone wasn’t interesting enough!) I encourage you to arrive early in order to not miss these moments. The pre-show sound design filled the entire Mockingbird space and included a Dolly Parton rendition of “Tie a Yellow Ribbon 'Round the Ole Oak Tree.” On the nose? Sure. But that doesn’t mean I didn’t fully enjoy it.

Friday’s Father, Susan Perrin-Sallak, was fantastic. She was sitting at one of the small tables across from me before the show started, and if she was at all nervous, she didn’t look it. She clearly leaned into the experience and was prepared to go with whatever she was asked (or, many times, simply told to do.) Admittedly, this is a difficult production to review; I don’t want to give anything away, yet it’s guaranteed that your experience will be at least 50-percent different than mine, based on the actor portraying Father. Perrin-Sallak, though, was remarkable, because she wholly committed to a role clearly written for a man, while offering some beautiful insights into grief. 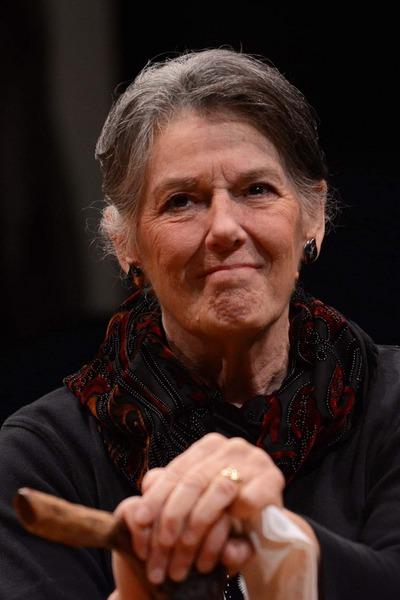 The plot finds a hypnotist discovering that one of the patrons at his show happens to be the father of the little girl he killed in a car accident, and playwright Tim Crouch's premise doesn’t lend itself to humor. In fact, it’s rather tragic, isn’t it? Grief can lead to many places, including belief that an oak tree is your dead daughter. But somehow, I still truly expected this production to be comical, simply due to its improvisational nature. Spoiler: While Friday’s performance had some comedic moments, it still fell far more on the side of a serious drama. Ultimately, An Oak Tree is an honest look at bereavement, but in a safe space under the guise of hypnosis. The element of the actor playing the father not knowing what will come next, right along with the audience, creates an emotional buffer: You needn’t completely commit to the sadness portrayed on stage, thanks to softening aspect of Crouch's “But what will come next?” approach.

It’s a curious experience hearing instructions given to the second actor. At times, directives were incredibly straightforward: “Say yes” Gougeon commands, to which Perrin-Salik offered the requisite “Yes.” Other times, an earpiece was clearly used with Gougeon off-stage so the audience’s entire focus was on Father. Moline is credited as the director and producer, but some credit absolutely must be shared with Gougeon, as he literally molds the night as the script unfolds. Yet it never entirely mattered when one could hear the directions being given, because the real magic was going to be in Perrin-Sallak’s responses, and she had only her gut instincts to guide her.

Unless the Hypnotist role is written this way, there were times in which Gougeon, perhaps hopped up on adrenaline, seemed flustered and mixed up his words a bit. But I genuinely only bring it up not because it mattered in the slightest, but because I wish I knew whether the mix-ups were accidental or scripted. (It’s not a typical reaction for me to leave a theatre wishing I had the script at home, but I certainly wished so on Friday.) An Oak Tree leaves plenty of questions unanswered, not the least of which is why Crouch's play references a five-year-old watching The Simpsons.

With their script bouncing between acknowledging reality and twisting time beyond recognition, Gougeon and Perrin-Sallak gifted the audience with space to acknowledge any grief or trauma we may personally be carrying under the guise of a fun hypnotism show, and the takeaway is whatever you’d like it to be – that is the magic of theatre, after all. In the end, I’m not certain whether either actor felt as though they had closure. But the fine line between art and life is thinner than ever at An Oak Tree, and is an experience you should not let pass you by.

An Oak Tree runs at the Mockingbird on Main (320 North Main Street, Davenport IA) through December 5, and more information and tickets are available by visiting TheMockingbirdOnMain.com.