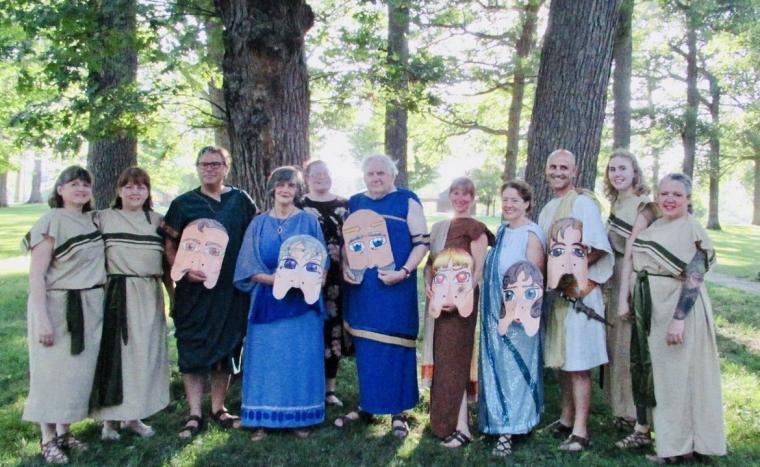 From my perspective, it’s always fascinating to hear from the director before a Genesius Guild production, and on Saturday night, Jill Sullivan-Bennin’s thoughts on Electra were certainly enlightening. Grief, it seems, is as timeless as life itself. And Sophocles’ tragedy certainly hammers the message in: Stephanie Burrough’s Electra spent nearly the entire show lamenting about the awfulness of everything in her life.

To be fair, I don’t know that anyone would consider Electra’s circumstances to be good. Her mother Clytemnestra (a wickedly sharp Dee Canfield) murdered her father Agamemnon. Her brother Orestes (the powerful Matt Walsh) has gone missing. Also, for unrevealed reasons, she doesn’t seem to like her sister Chrysothemis (Anna Kronenberger) much. Electra is perhaps rightfully angry with her mother. Not only is Mom a murderer, but she has also taken a lover, Guy Cabel’s Aegisthus, and is forcing them to live together as One Happy Family – which, it seems, is just too much, too soon. (Apparently, Mom moved on from Dad far too quickly for Electra's liking.)

So: A lament-fest this is, and if Electra’s familial woe didn’t make so much sense, she’d be rather annoying. As it was, I found her constant bemoaning to be at the very least exhausting. So much so that every character interacting with Electra throughout the performance seemed to exhibit visible relief when they could leave the stage again. Electra’s swollen emotional state was made visually apparent as her mask featured red eyes depicting her many months of crying. Mask designers Daitlyn Duffy and Jacob Lund displayed keen attention to detail with all their masks (which were fitted by Bob Hanske), and they paired perfectly with designer Shannon Ryan’s costumes. Canfield’s periwinkle number was especially becoming, as were the sparkles rocked by Kronenberger. 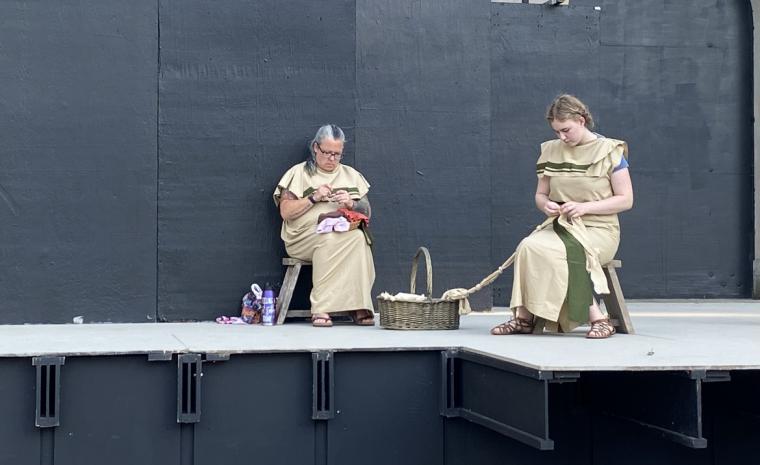 Electra’s voice of reason came by way of the chorus: Heather Kangas, Kathy Calder, Melita Tunnicliff, and Claire Henninges. These unmasked women were the glue that made the story come to life. Not only was the foursome nearly always present on the playing area's small benches – some of the only set pieces adorning the stage – but they also told Electra many times to not worry. Unfortunately, just like when anyone tells anyone to calm down, the advice had the opposite effect, and our main character charged full throttle into obsessive complaining. If people were unaware that Electra was a Greek tragedy, Burrough made sure we didn't forget.

The other breath of fresh air in Genesius Guild's production was Mischa Hooker’s Old Man. (No, I’m not being mean: That’s what he’s called in the program!) Every time he came on stage, Hooker made me laugh out loud. Maybe it was his straightforward delivery, because retelling the gruesome tale of Orestes’ death shouldn’t have been funny, or maybe it was just that more often, he wisecracked a zinger echoing exactly what I was thinking. The program doesn’t denote who did the updating to Sophocles’ script, but the production beautifully found the correct balance between poetic and more modern lingo.

And imagine my shock when even Clytemnestra wasn’t completely the villain she was made out to be. (It’s clearly been a spell since I read through this particular story.) She’s an adulteress and killer, to be sure. But when you, as an audience member, hear Clytemnestra’s side of the story, her actions make a bit more sense as to why she opted to off her husband. Not to excuse her behavior, precisely; it’s just that perhaps Electra could have brought her attitude down a notch after talking it out with her mother. Alas, Clytemnestra and Electra both feel as though they are categorically correct in their beliefs and manage to hurl some disgruntled insults toward each other. 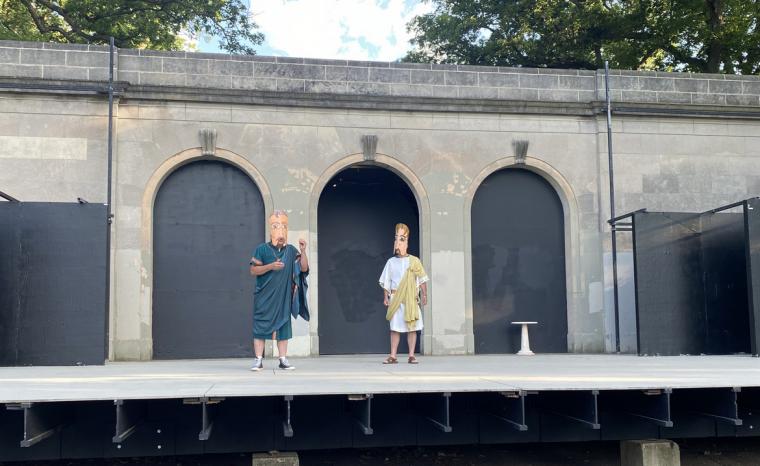 Sullivan-Bennin’s cast, as a whole, was excellent at projecting. It’s always nerve-wracking seeing an outdoor show, because you never know what ambient park noises the cast will be forced to compete with, but during Saturday’s opening night, there wasn’t a problem at all. Kronenberger's was perhaps the character I had to focus on the most to make sure I understood what she was saying, but she was also the furthest away from where I was sitting, and I still didn’t miss a thing.

Throughout it all, Sullivan-Bennin kept the pacing up. Electra runs under two hours, even with a 10-minute intermission, so it proved a perfect dollop of Greek tragedy on a lovely July night. The modern translation, meanwhile, offers plenty of meat to think about or laugh over. (Canfield's Clytemnestra declaring childbirth as “incomprehensible” will stick with me for the foreseeable future; the performer offered epic line delivery, and furthermore … it’s true.)

The aspect of Genesius Guild's Electra I most appreciated was all the comeuppance the plot features. Every character ends up with a life lesson of some sort, and finally, even Electra finds a certain amount of joy. The emotional whiplash required by Burrough in this role is impressive and should not be understated. Sophocles wrote a timeless story that anyone can enjoy – one with murder, mistaken identities, a faked death, and family re-unifications – and Sullivan-Bennin has staged it quite well indeed.