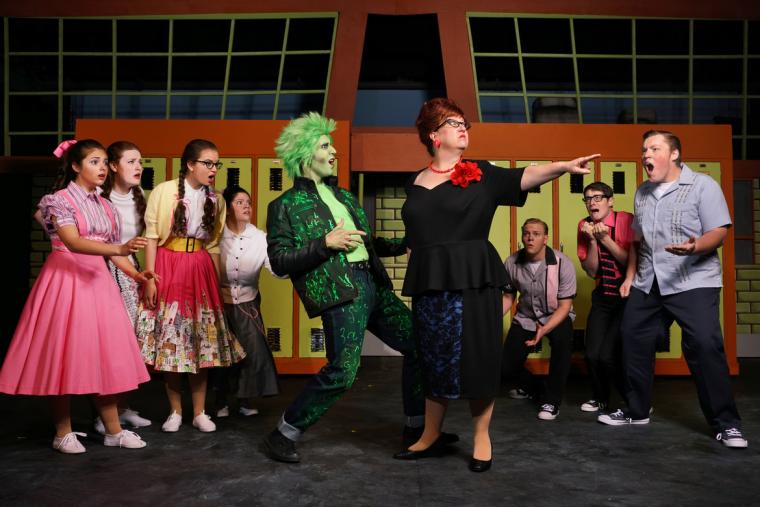 I mean no offense, but I just have to get this off my chest: Zombie Prom – the first production in the inaugural season of new theatre company the Mississippi Bend Players, directed by Broadway veteran Philip Wm. McKinley – is dumb. There, I said it. I mean, we're talking about a kitschy, '50s-era musical comedy in which a pubescent zombie goes to a high-school prom, for God's sake.

But before QC theatre elites call for my head, hear me out, because the gift of having a talent such as McKinley helm this type of production is that he knows how to create a show boasting a complete vision, and he also utilizes top-level talent to take a silly script and turn it into something exceptionally entertaining.

In a nutshell, Zombie Prom's plot centers around the rebel high-school punk Jonny (without an "h") who meets an innocent classmate named Toffee during a nuclear-safety drill at school, and, of course, they fall in love. Her parents don't approve, and so Jonny commits suicide by throwing himself into the waste container of a nearby nuclear power plant (as you do), only to return as a teenage nuclear zombie.

But wait! There's more! When Jonny is finally released among the living and returns to school, his appearance is less than appealing, and according to principal Miss Strict (Shelley Walljasper), there's a stringent policy forbidding zombies in the classroom. However, local sleaze reporter Eddie Flagrante (Tom Walljasper) catches wind of the supernatural student and realizes he has the story of a lifetime. 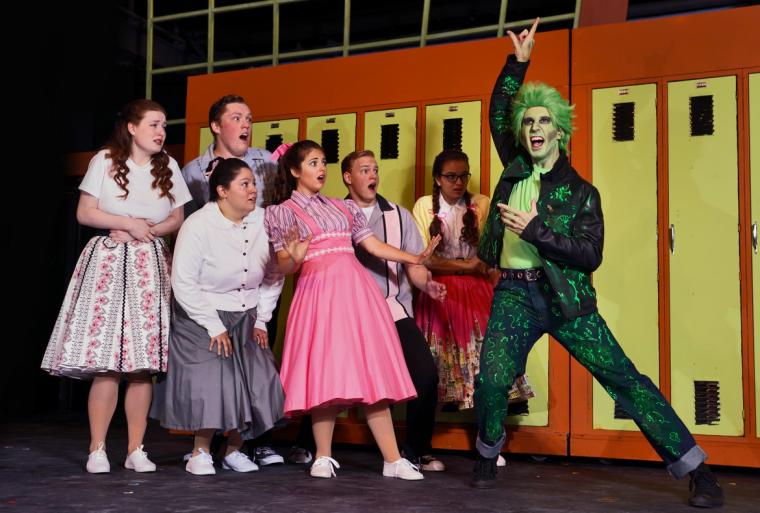 But we're not done yet! Eddie, you see, meets up with Miss Strict, and we learn the two had hooked up years earlier in high school (for five whole minutes),with the attraction between them palpable as they sing the duet "Exposé." And the climactic prom goes on with all players in attendance, until … . Well, let's just say this isn't exactly The Walking Dead. It's more like Grease meets The Toxic Avenger.

So yes, with its book and lyrics by John Dempsey and music by Dana P. Rowe, Zombie Prom is dumb. But McKinley has assembled an "A"-list of area talent to bring this frolicking and fatuous tale of deceased-boy-meets-girl to life.

In the role of Jonny, Don Denton knows how to breathe life into the undead. With his green fright wig and makeup, Denton is a hoot as the corpse without a cause, and his triple-threat talent makes this zombie character less hellion than hero. As the doe-eyed Toffee, Emily Gulden puts the "v" in virtuous; her take on Toffee is endearing, and her subtle approach a nice balance to Denton's high energy. At Saturday's performance, Gulden's vocals were a tad soft at times, but I suspect that may have been a microphone issue which has hopefully been corrected. 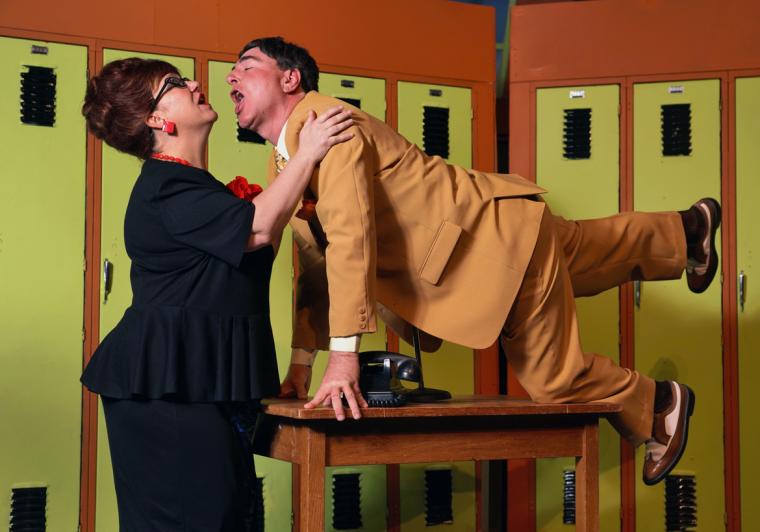 Act II, meanwhile, is absolutely owned by the house of Walljasper. Shelley's Miss Strict is a total character, and so much fun that I thoroughly enjoyed every moment she was on stage. As for Tom's toupee-obsessed Eddie, he's a captivatingly smarmy creation, and to see this real-life married couple use not only their talents, but their obvious trust in each other, is magical; they command Zombie Prom with each line and lyric they deliver.

The production staff of "Team McKinley" is also topnotch, and I cannot say enough about how much I enjoyed Dianne Dye's simply splendid costumes, which add perfectly coordinated splashes of color (right down to the buttons) in this Atomic Age fluff-fest. Adding Susan Holgersson's amusing and functional set design, with its ultra-fast scene changes, and sprinkling in Ann Nieman's crisp, era-appropriate choreography and Ron May's music direction, this brainless little show is truly something to be experienced.

I'll say it again: Zombie Prom is dumb. But that, along with the phenomenal talent involved, is part of the charm that makes this cult-classic-in-the-making work. Live theatre doesn't always have to be profound or heavy. (Don't we get enough of those qualities in real life?) Bring your spouse and your kids, check your brains at the door, and take in this nonsensical, entertaining night of the living dead.