Killer Presentation: “Assassins,” at the Black Box Theatre through August 18 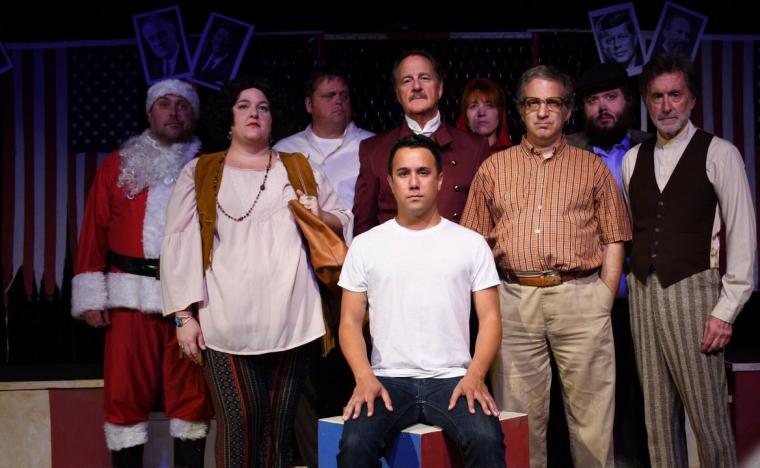 Assassins, at the Black Box Theatre, is the cheeriest musical about unhappy people who made bad choices that I've ever seen. And prior to Thursday's performance, I didn't know it was literally about those who killed American presidents, or tried to – I just saw "music and lyrics by Stephen Sondheim" and said, "I'm in."

John Weidman wrote the book for this 1990 Off-Broadway musical; the 2004 Broadway production won five Tonys. Black Box co-owner David M. Miller directed, and was also lighting and scenic designer. (The set was dressed with patriotic bunting, ripped and burned flags, photos of the presidential targets, and a carnival booth.) Randin Letendre was the music director who also played in the four-piece orchestra. Kelci Eaton handled both choreography and costumes; the cast moved well, and looked good doing it. And while there are no props-crew credits in the program, I give credit here to those who assembled Assassins' array of period firearms. I haven't seen that many instruments of mayhem onstage since I saw the Wall o' Weapons – from the vantage point of a performer – in the Playcrafters Barn Theatre's Deathtrap.

Admittedly, it took some time to warm up to this show. At first, I couldn't grasp the tone or follow the plot. Turns out it's a collection of vignettes – assassins' stories, as well as imagined meetings of murderers of different eras – told through tragedy, comedy, and song. And the Black Box cast is adept at everything. Unsurprisingly, the score is challenging (it's Sondheim), and the performers handled their notes and rhythmically unconventional cues very well. 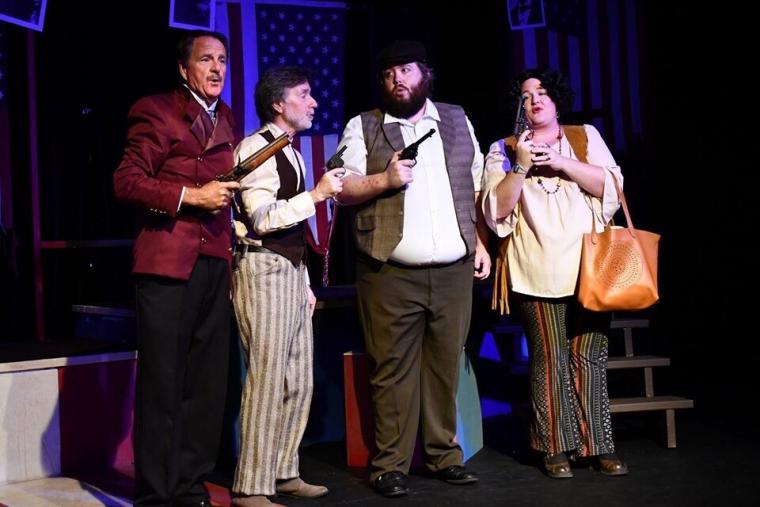 Scott Peake, playing the Proprietor, leads the opening number robustly, heckling the future assassins from his booth to shoot the prez as a way to solve their problems. Area-theatre veteran Mark McGinn – you've probably seen him in something – portrays, with dignity and verve, the most notorious American assassin (for almost 100 years, anyway): the complex John Wilkes Booth. Tommy Ratkiewicz-Stierwalt, as the Balladeer, represents the American public, narrates, and serves as the show's conscience (as the Che Guevara role did in Evita). He also plays Lee Harvey Oswald, and Ratkiewicz-Stierwalt's transformation is startling and effective.

Tom Vacarro plays Guiteau, a chipper and hilarious killer, and says so much – whether smiling or deadpan – with just a turn or a nod and impressive timing. As for Jonathan Turner, I knew him to be a musician and composer, but had never seen him act. He is remarkable. I worked in a newsroom with Jonathan for many years, and barely recognized the dapper reporter (and fellow theatre reviewer) as ths production's twitchy schlub John Hinckley Jr.

Sara Nicole Wegener, who usually works her artistry on set, props, and costumes, takes the stage again as "Squeaky" Fromme, and she's exceedingly entertaining as the quintessential hippie and Manson devotee. Emmalee Hilburn is uproarious as Fromme's accomplice Sara Jane Moore, handling the physical and verbal comedy ably. Benjamin Graham plays the passionately committed Czolgosz, making him real and sympathetic. Brant Peitersen is Byck, Nixon's would-be assassin, and he's funny in his rants as a regular Joe who happens to love musicals; I felt for his character, too. Director Miller, also an experienced actor, took the role of FDR's attempted shooter Zangara after an originally cast performer dropped out, and he leads the ensemble, amusingly, in explaining "How I Saved Roosevelt."

Though Benjamin Miller, who portrays Billy, is a young, first-time actor, he throws a convincing tantrum. (He should get involved in more shows, as I have a feeling he's got chops.) Dorothy Turner, another young actor, already has skills, poise, and a good voice, and melds well here with Assassins' more experienced performers. Dani Phillips-Kent, Eric Teeter, Joe Wren, and Julie Hummel make up the rest of the ensemble and are effective, notably in telling their stories of that tragic day in November 1963. 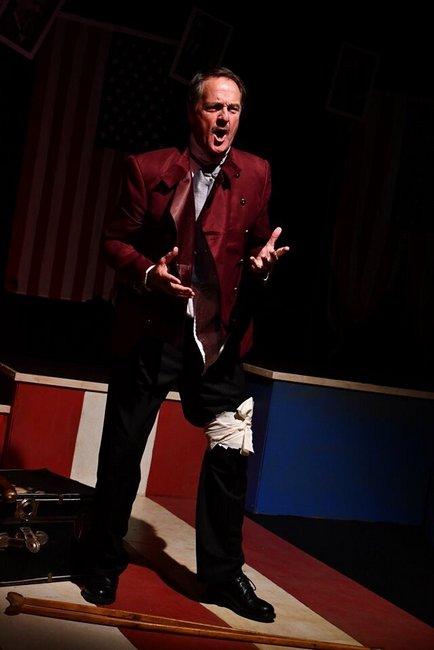 My favorite number was Turner's and Wegener's “Unworthy of Your Love,” which was lyrically and vocally excellent, with emotion in every line. I also enjoyed my essential dose of a cappella in “The Gun Song,” which featured Graham, McGinn, Vacarro, and Hilburn. The lyrics may be disturbing, but the vocal blends are glorious.

I realize that much of the show takes place in the timeless ether, but a few anachronisms still stuck out: I saw a wedding ring on an unmarried character, and a Fitbit on another actor. (I also acknowledge that fealty to one's spouse – or personal trainer – may be more important than the demands of the stage.) Also, as theatre co-owner Lora Adams mentioned before the show, there are a lot of gunshots. But while there is no gore, it was extraordinarily unpleasant to have so many guns pointed at the audience at such close range. (Which I'm sure was the intended effect.)

The Black Box's latest is both chilling and humorous, with many uncomfortable moments. It also expresses a truth – that murderers are not monsters, but rather people, and also usually not "crazy." Most murderers are not mentally ill, and most people with mentally illnesses are not murderers. So what does make an assassin? I recommend that you see Assassins. It will prompt thought and discussion about whether anyone deserves to die, if anyone should make that decision, the aftermath of that decision ... and whether any assassination attempt, for any reason, is worthwhile.

Assassins runs at the Black Box Theatre (1623 Fifth Avenue, Moline) through August 18, and more information and tickets are available by calling (563)284-2350 or visiting TheBlackBoxTheatre.com.