Killer Serial: “The 39 Steps,” at the Richmond Hill Barn Theatre through August 25 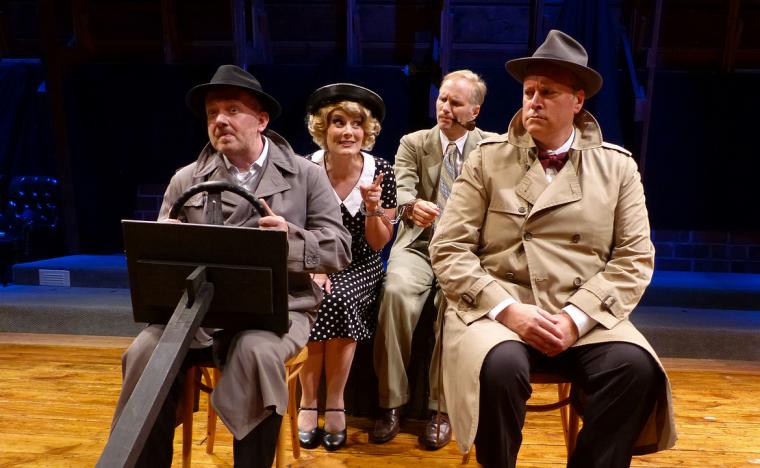 The roots of the play The 39 Steps were in a 1915 magazine serial by Scottish novelist John Buchan, which became a popular novel, which spawned four more books about its protagonist. It was adapted for film three times, notably (and to great acclaim) by Alfred Hitchcock, and once for television. The first version of the play, written by Simon Corble and Nobby Dimon and billed as a "parody," toured in 1995. Patrick Barlow consequently rewrote their script, premiering his adaptation in London in 2005. His version hopped the pond to become a long-running Broadway smash, nominated for six Tonys in 2008 (including Best Play) and winning two. This month, more than 100 years later, a form of Buchan's story is playing live at the Richmond Hill Barn Theatre. And I highly recommend you see this ingeniously staged, well-performed lark of a show.

Its premise concerns a wrongly accused man who knows too much, on the run through England and Scotland with the law and outlaws at his heels. Imagine recreating his adventures, with more than a dozen settings, on stage. Envision that stage in one of the most intimate area venues you know. Picture the basic set as four trunks, a few chairs, some pieces of cloth, a couple of ladders, and the occasional mobile door and window. Oh – and realize that only four actors portray all the characters. This 39 Steps embodies the magic of theatre, engaging our minds to help create the story.

Director Jennifer Kingry calls the script a "fond homage" to Hitchcock's film, and some have deemed it a Monty Python-type treatment (perhaps because they also were a small troupe playing multiple British roles). I'd say it's a close cousin to the film Top Secret! by the Zucker-Abrahams team – and if you haven't seen that, surely you remember their biggest hit Airplane! (And don't call me "Shirley.") Although there are intentionally humorous lines, most of this play's laughs come from the performances and staging. And, by George, this company does a beautiful job. In less experienced hands, the show could've been a muddy mess. Instead, its clarity (and hilarity) sparkle. 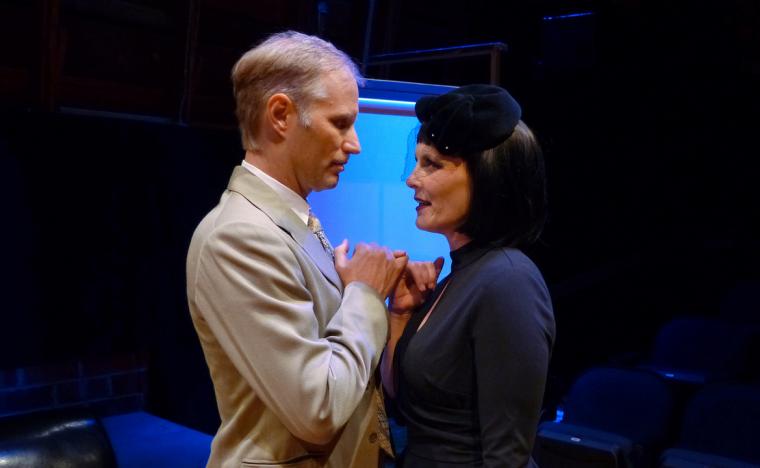 Kingry also designed the set, built by Jim Skiles and Mike Skiles, and serves as lighting designer/operator, while Nicholas Dunk is the sound designer/operator. (Sound and lights are especially important for a production that's intentionally minimalist in its staging.) The snippets of film scores and ingenious changes in lighting, meanwhile, give Kingry's play a strong cinematic feel, and Ann Keeney-Grafft tackled the difficult costuming job well, providing characters with I-don't-know-how-many outfits. (And, given the numerous quick changes, I don't know how they all fit in the Barn's relatively cramped backstage area.)

Jonathan Grafft knocked me over with his portrayal of Charlie in Richmond Hill's Flowers for Algernon in 2016. Now, he plays The 39 Steps' fugitive Hannay just as ably. Grafft's air of slight befuddlement and polite reserve as Hannay became snared in his predicaments is perfect, and it's delicious to see the changes as the character copes. The light upper-class accent he employs also conveys Hannay's English-ness while remaining intelligible.

Jessica White is active in several local theatre groups, and I can see why: Her skill at playing this production's lead women (Annabella, Pamela, and Margaret), each with a distinct accent and personality, is remarkable. Her demeanors expertly differentiate the three; it would've been clear which character she was even without her sundry costumes. I also shared all their emotions – desperation, bashfulness, outrage … . Even relief when kicking off uncomfortable shoes, and ickiness when peeling off wet stockings. 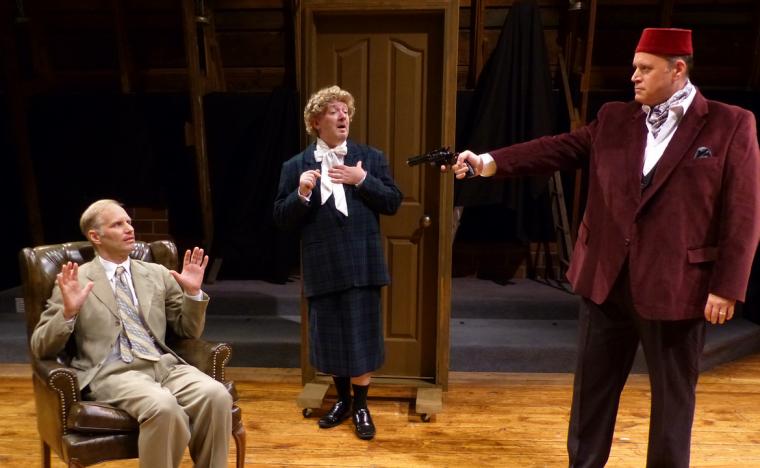 Regarding the two tasked with playing every other character (and there are dozens), Michael Kelly and Kevin Babbitt – credited as “Clown #1” and “Clown #2,” respectively – cope with their myriad parts, wardrobes, and intonations with astonishing speed and facility. Among their roles are conductor, constable, criminal, farmer, music-hall performer, salesman … . You get the gist, but experiencing it will give you all the wonder. (Perhaps their female roles are what remind some of the Python troupe, but when they're wearing skirts they don't camp it up for laughs. They don't need to.)

Kelly is a veteran of many area productions, and I was privileged to share the stage with him in the Playcrafters Barn Theatre's Harvey four years ago. His abilities and range consequently don't surprise me – I've enjoyed him in other shows, too – but as I know he's such a genial gentleman, he particularly tickled me with his turns here as law officers and scoundrels. Babbitt, who holds a PhD in theatre and is head of the Scott Community College drama program, is just as delightful in his portrayals. His transformations are complete, and Babbitt's deft employment of the British Isles' varied regional accents, from Cockney to burr, was particularly impressive.

I also applaud Aiden Grafft and Caleb Huddleston – stage-crew members who stepped in for a few moments as actors but didn't get a curtain call – and am aching to gush over the clever uses of set and props, hilarious bits of physical business, and occasional cracks in the fourth wall. But I want you to experience all the fun of The 39 Steps for yourselves. Reserve tickets. Bring friends. You'll thank me.

The 39 Steps runs at the Richmond Hill Barn Theatre (600 Robinson Drive, Geneseo) through August 25, and more information and tickets are available by calling (309)944-2244 or visiting RHPlayers.com.