King of the Hill: "The Music Man," at the Circa ’21 Dinner Playhouse through May 13 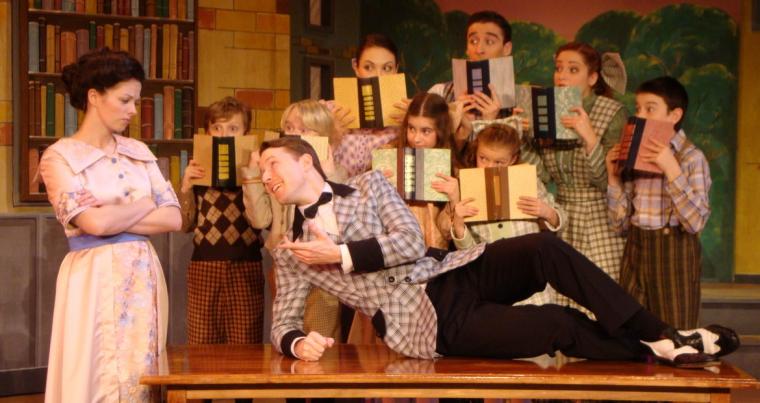 In the Circa ’21 Dinner Playhouse’s current, topnotch production of The Music Man, the signature image is actually an image in motion: actor Don Denton, in his role as Harold Hill, strolling – or more accurately gliding – across the stage.

When used to describe a performance, the adjective “weightless” is generally employed as a kind of insult implying a lack of emotional heft. But Denton, as Meredith Willson’s legendary huckster, seems weightless in a nearly literal way; only the laws of gravity appear to be keeping Hill’s feet on the ground, and even then, his shoes are loaded with springs. (This latter part I mean figuratively ... unless Gregory Hiatt’s magnificent costume designs include, for Hill, some truly miraculous footwear.) With his brisk stride suggesting a man determined to stay several steps ahead of everybody, Denton’s Hill doesn’t walk so much as take tiny balletic leaps wherever he goes. And when the untrustworthy salesman and faux bandleader makes a particularly sudden motion – jumping onto a table, say, or in front of Paige Salter’s Marian Paroo – he appears to stay airborne for just an instant beyond human capability. You could chalk all this up to excellent physical acting, and it is. But Denton’s jubilant air of relaxed confidence, and the sweetly devilish gleam in his eye, tell you that Hill’s movements are mere extensions of his quick wit and easy charisma. When director/choreographer Jim Hesselman’s presentation is really rolling, the show exudes a similar sense of buoyant, effortless charm. 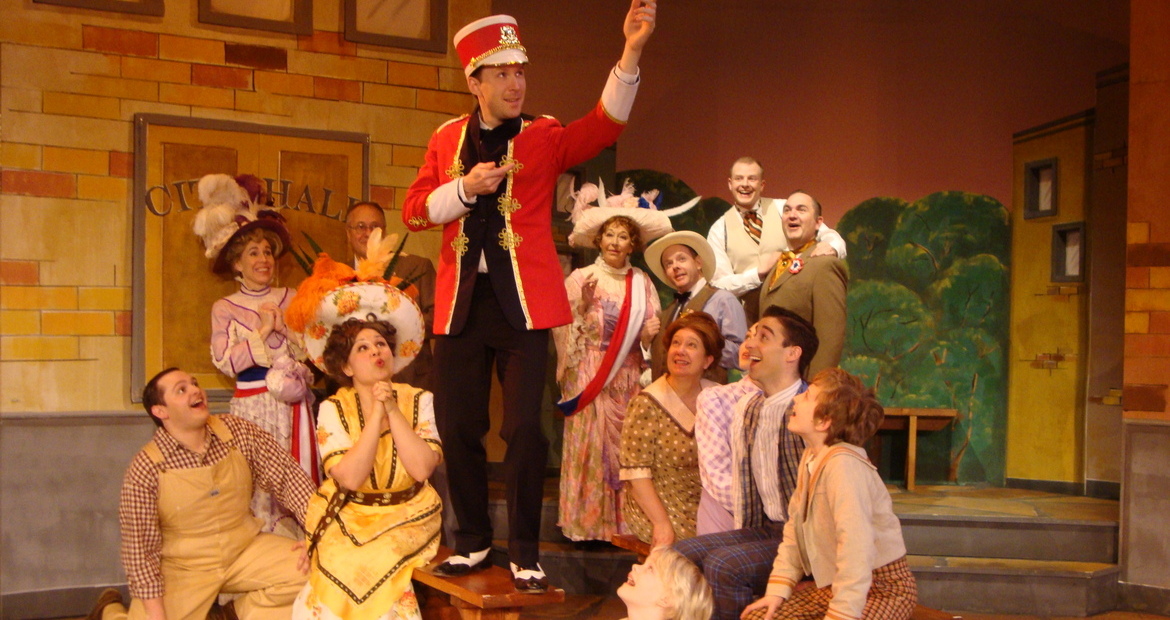 It’s certainly there whenever Salter is showcased. Her light, fluttery soprano is ideal for the delicate loveliness of “Goodnight My Someone” and “My White Knight,” and Salter’s portrayal gives us a smart, sensible, wounded Marian who’s pretty sure she’s being conned but level-headed and openhearted enough to realize how little it matters. (In real life, Salter and Denton are getting married this fall, and their sweet and salty stage rapport would seem to explode the popular myth that happy couples can’t share vibrant co-star chemistry.) But the phenomenally well-sung Music Man – a work that’s both a celebration of, and rebuke to, the customs of small-town Iowa – is teeming with additional unforced delights, few of which are more delightful than River City’s makeshift barbershop quartet composed of Marc Ciemiewicz, Brad Hauskins, Doug Kutzli, and Tristan Tapscott. Given Ciemiewicz’s solid bass notes, Tapscott’s cheeky falsetto, and Hauskins’ and Kutzli’s rich tenor and baritenor, I could’ve happily listened to “Ice Cream” and “Goodnight, Ladies” in hours-long loops.

Yet there’s also the bouncy word salad of the “Rock Island” opener to enjoy, and the giddy anticipation in “The Wells Fargo Wagon,” and the chirpy gossiping of those “Pickalittle (Talk-a-Little)” busybodies. I’ve attended numerous Music Mans (Music Men?) over the years, and have never seen “(Ya Got) Trouble” delivered with so little sweat; at the March 17 performance, Denton spit out Willson’s tongue-twisting lyrics with such no-biggie aplomb he may as well have been singing “Happy Birthday.” Hesselman’s choreography, meanwhile, is consistently energetic and oftentimes clever. But he truly outdoes himself in the “Marian the Librarian” routine, staging it as an endearing five-minute sitcom with Hill coercing a roomful of kids into quietly acting out and making himself, in the process, look très adorbs. 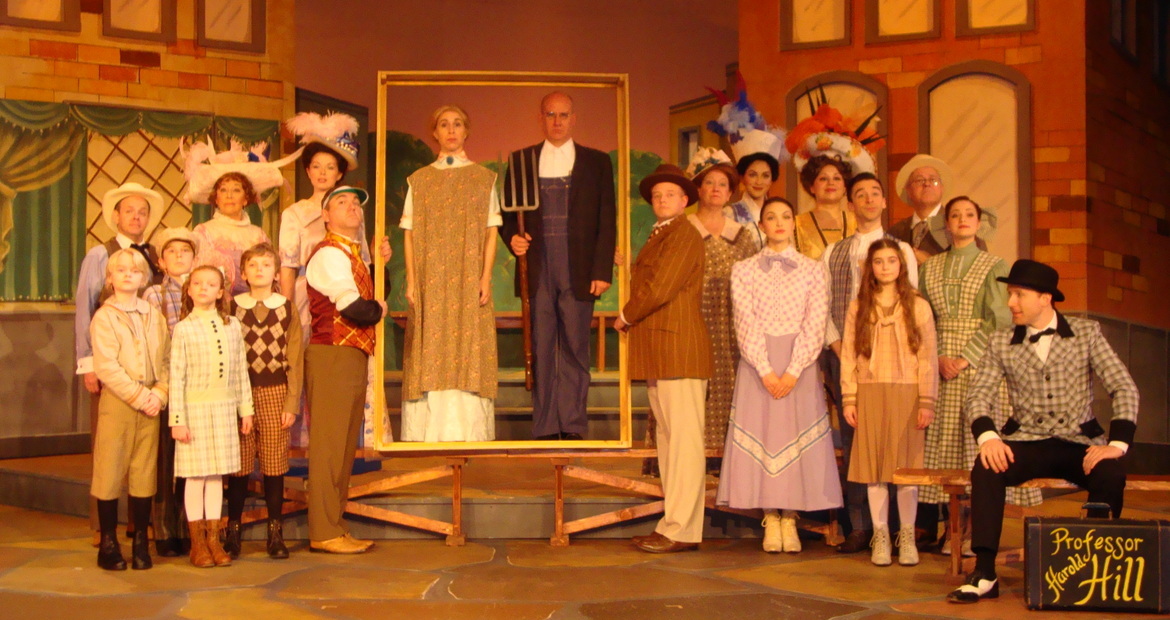 You may have noticed how many famed Music Man numbers are given stellar treatment in Circa ’21’s latest – and those titles I mentioned, which don’t even include that “Seventy-Six Trombones” ear-worm, only get us to the end of Act I. (Like me, you may also be forced to check your program at intermission wondering what other recognizable tunes could possibly still land, having momentarily forgotten about “Gary, Indiana,” and “Till There Was You,” and “Lida Rose,” and “Shipoopi” ... .) Yet that’s a measure not only of Willson’s supremely satisfying accomplishment, but of just how much there is to talk about ... even if not all that talk, on Friday, would’ve been entirely complimentary.

Although a genial performer and inarguably outstanding dancer, Joey Boos was required to play much younger than his years as teen scoundrel Tommy and consequently came off as strained, as did too much of Brett Mutter’s initially winning mugging as the scallywag Marcellus. The amplified sound in early group songs was muddy, which made us miss some great “Iowa Stubborn” lyrics. And while the scene changes on designer Erica Zaffarano’s impressively functional set were handled with seamless panache, the same couldn’t be said for how we saw them lit. With a half-dozen or so different presentational styles seemingly (accidentally?) attempted, the shifts were simultaneously amazing for their deftness and unfortunate for their lack of cohesive polish.

There were, however, more than enough pleasures to make up for the random flaws, and most of them came via Hesselman’s generous direction of his game, gifted ensemble. Todd Tucker delivered eccentric character comedy and unpredictable readings as Mayor Shinn, while the superb Kay Francis pulled off a full Florence Foster Jenkins as the mayor’s aging-debutante wife. Rachelle Walljasper was typically marvelous as Marian’s funny, down-to-earth mom, and had a spot-on Irish brogue, to boot. (And a Happy St. Patrick’s Day to you, Rachelle!) Meanwhile, the child actors were clearly having a ball, perhaps none more so than Julian Anderson, who – alternating the role with Brennan Hampton – played the lisping Winthrop on Friday with such tonality, vocal clarity, enthusiasm, and joy that some wise producer needs to sign him, pronto, for a touring turn as Les Misérables’ Gavroche. Taken overall, this Music Man was terrific. Whenever Anderson stole the show, it was positively thcrumpthyuth.

The Music Man runs at the Circa ’21 Dinner Playhouse (1828 Third Avenue, Rock Island) through May 13, and more information and tickets are available by calling (309)786-7733 extension 2 or visiting Circa21.com.