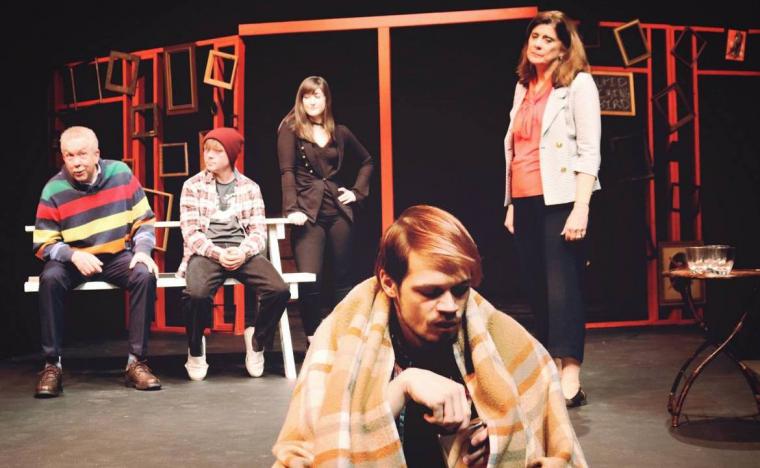 Let’s just get this truism out of the way: When a show has a swear word in the title (though we’ve taken the liberty of adding some well-placed hyphens for you), one should expect mature language. But if a little – okay, a lot – of swearing won’t ruffle your feathers, then the Playcrafters Barn Theatre's Stupid F---ing Bird is a presentation that will satisfy your needs to think and emote.

As playwright Aaron Posner’s contemporary adaptation of Anton Chekhov’s The Seagull, this production follows a group of people interconnected in a convoluted love triangle. In it, Conrad has written a play starring his girlfriend Nina, who has a crush on Conrad’s mom Emma’s famous writer-boyfriend Trigorin. Then there’s a secondary love triangle involving Conrad’s friend Dev, who is in love with Mash, who actually just loves Conrad. Fortunately, though, these relationships sound far more confusing than they are when you’re watching them unfold on stage, as director Madison Duling’s production serves up three satisfying acts of comedic tragedy.

Right away, you find out that this isn’t going to be just any show, as the characters are not only cognizant of the fact that they're in a play, but frequently interact with the audience. In what is essentially an examination of relationships, Stupid F---ing Bird features all the feelings, and those of Conrad (the wonderfully talented Anthony Naterelli) ranged from manic to stoic to everything in between. Unafraid to hold eye contact with his audience, Naterelli gave a performance that was intense but oh-so-funny. (I for one will never be able to hear the word “thwart” again without chuckling.) The deep variety of emotion needed to portray Conrad gave Naterelli a lot to do, but I also understood why Nina (Adrienne Edwards) was drawn to Mike Turzynski’s comparatively calm Trigorin instead. 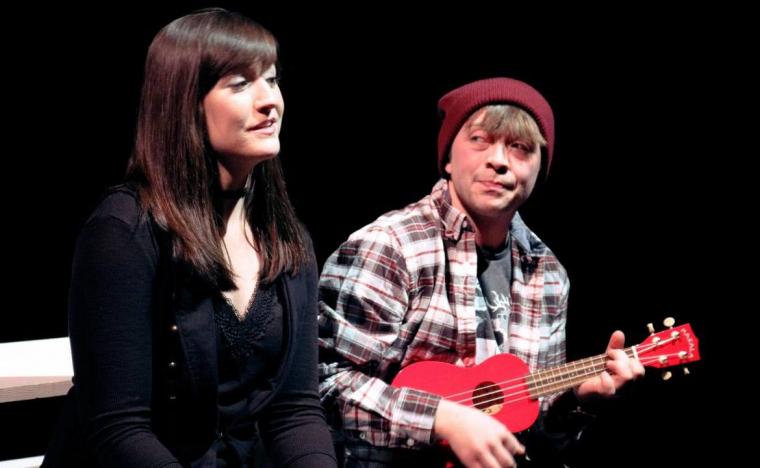 Meanwhile, Leslie Munson’s Mash – who wore primarily black because she’s “in mourning for her life” – was throwing herself at Conrad right and left, baking him pies he seemed to enjoy and then singing songs on her ukulele that were both heartfelt and hilarious. And poor Dev (Aaron Lord) was one of the few emotionally stable characters in this production. Whether by nature or aided herbally (you can decide for yourself), Dev’s peaceful demeanor prompted some solid introspection for Conrad and the audience alike.

Stupid F---ing Bird is Duling’s directorial debut, and for the most part, Wednesday’s dress rehearsal went off without a hitch and Duling utilized the space fully in some really delightful ways. The only thing lacking, from my perspective, was the belief that any of these characters actually loved the person they were supposed to love. Maybe it’s just how Posner’s script was written, because while the cast as a whole is profoundly talented, their motivations seemed to be surface-level frustration and not deep, unrequited passion. It’s hard to shake off the updated, gloomy-Russian influence that seeps into every monologue.

One particular scene featured Emma (Allison Ambrose) and Trigorin frozen in an intimate moment as Mash, Nina, Conrad, and Dev appeared, each giving interlapping monologues, with the men and women speaking simultaneously. Lighting designer Alexander Richardson lit this tousled moment in deep reds and it became an exciting commentary, signifying that everyone has the same struggles and no one is really all that different from each other. But just as the sentiments started to get too deep, out walked Sorn (Bruce R. Duling), who just wandered around listening and staring bewilderedly, and then broke the tension perfectly when he spoke. Because in this production, if you’re not crying, you’re laughing. 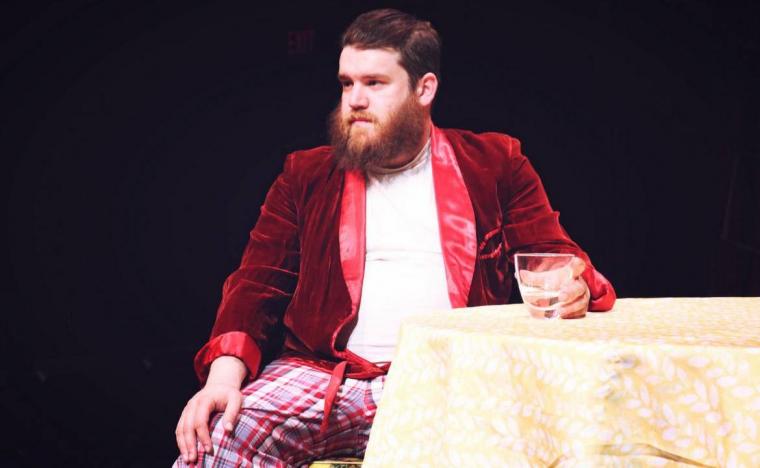 The set featured a back-stud wall decorated with pictures of Chekhov and birds – small details I truly appreciated. The overall suggestiveness of the wall allowed it to work for both indoor and outdoor scenes as needed and was extremely visually interesting. Richardson doubled as the play's sound designer and selected music that not only set the tone melodically, but lyrically as well. The care that went into accentuating Stupid F---ing Bird from a technical perspective makes it even more of a shame that the show (a Barn Owl series presentation) has only a one-weekend run.

Ultimately, I don’t think the purpose of this production is to make any specific grand statement. Rather, its ensemble throws a lot of things at you, and if they happen to resonate, great; if not, that’s okay, too. The show calls for better and more unique theatre while still existing as a contemporary upgrade of a Chekov classic, yet there are poignant takeaways throughout the contradictions and charming laughs to be had at Stupid F---ing Bird – frequent F-bomb punctuation notwithstanding. If Wednesday’s preview is any indication, Playcrafters is poised for a provocative weekend of witty theatre for mature audiences. Don’t let the opportunity to see it fly away.

Stupid F---ing Bird runs at the Playcrafters Barn Theatre (4950 35th Avenue, Moline) through February 10, and more information and tickets are available by calling (309)762-0330 or visiting Playcrafters.com.