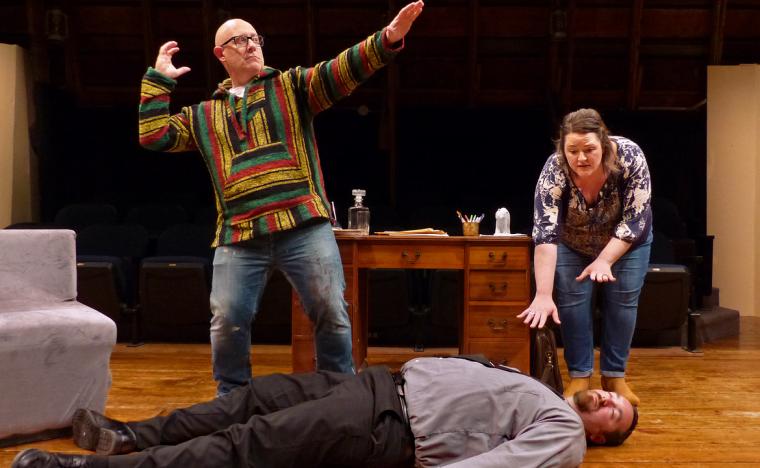 Honesty is the best policy – except, apparently, when it comes to what’s currently playing at the Richmond Hill Barn Theatre, because Here Lies Jeremy Troy is one heck of a play on words. It turns out that Jeremy Troy – a lawyer seven years into his career, played by Matthew McConville – isn’t dying; he’s lying. But I am being completely honest when I say Thursday’s opening night for director Dana Skiles’ show was full of humor as the characters tried to work themselves out of these lies.

The basic premise of author Jack Sharkey's Here Lies Jeremy Troy is that Jeremy and his wife Kathryn (the brilliant Emmalee Hilburn) are preparing to have Jeremy’s boss over for dinner when an old classmate of Jeremy’s, Charlie Bickle (Patrick Kelley), unexpectedly shows up. Charlie discovers that Jeremy’s law degree is fake, and uses that knowledge as leverage to become an open-ended house guest. From then on, the weird plot twists just keep unfolding – and even though, as an audience member, you can’t help but wonder when one of the characters would fess up, or even stumble upon the truth just by accident, the situation somehow never seems so farfetched that it’s unbelievable. In fact, this show was in every bit enjoyable. 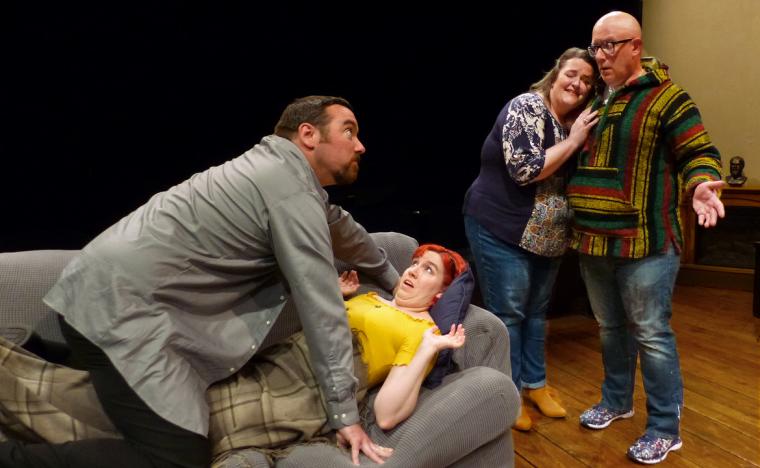 Skiles' cast worked incredibly well as a unit. Hilburn was an absolute delight as Kathryn. In fact, I tended to be captivated by her any time she was on stage as she navigated what exactly was going on in her home. It helped that she was far and away the figure I sympathized with the most, and her misunderstandings were funny. She acted every bit the kind hostess when Charlie randomly arrived at her home on an important day with blackmail on his mind. (I, for one, wouldn’t have been nearly as hospitable.) Kelley does an excellent job portraying Charlie, ably balancing the line between demanding and charming. Was it odd to see a grown man still rocking the paint-splattered jeans of an artist and a Rasta hoodie? Sure, but it certainly suited the character. Skiles also worked on the costumes, and really did a nice job rounding up pieces that worked well within the play's context.

By the time Elizabeth Schaffer’s Tina arrives at the Troys' house, the plot has thickened considerably. Tina and Kathryn have very different ideas of why Tina is there, you see, and their conversation, woven with misunderstandings, is pretty hilarious. In Skiles' production, Hilburn and Schaffer held up their end of the comedy bargain beautifully, and these two women hit the nail on the head with their adroit deliveries. I have never before wondered what being accidentally tranquilized would look like, but I imagine Schaffer and Hilburn’s portrayals reflected a pretty good handle on it.

I couldn’t quite figure out the play's fifth character: Jeremy’s boss Sven Ivorsen. Jim Harris, however, was entirely committed to the ridiculous laugh he created for his portrayal of the so-very-gullible Sven, and bless the guy for going along with eating the truly horrific dinner placed in front of him. (Hilburn's bit with the ham sandwich was entirely relatable; that would’ve been me given what was on the plates.) Sven was presumptuous and all-too-willing to go along with the crazy antics … but then again, that's what makes situational comedy so funny. It was great fun watching the other four characters working hard to stick to their cobbled-together story and make it believable enough for Sven to digest. 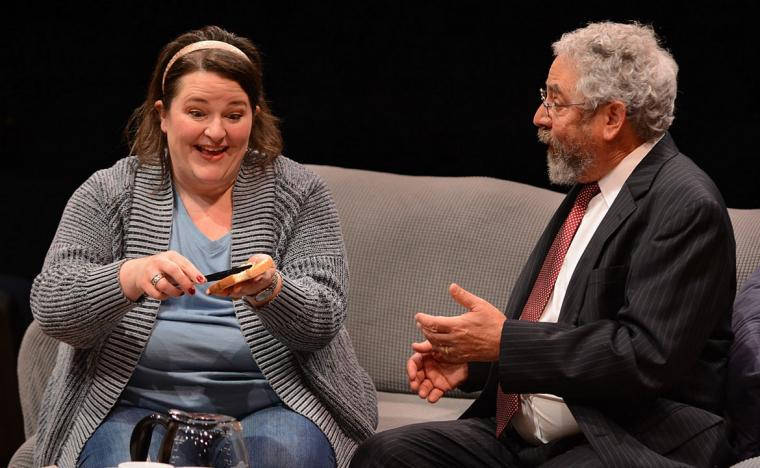 Skiles had expert instincts about when to push her cast toward the silly and when to stay more realistic, and with her performers nicely balancing out the script, Here Lies Jeremy Troy was an incredibly enjoyable night out. Although Sharkey's humor was both witty and full of physical comedy, I especially appreciated the moments in which the cast, through small ad-libbed quips, injected bits that Richmond Hill’s patrons will find familiar (if they’re paying attention). Skiles used the venue's in-the-round stage quite well, making sure her cast was visible to the entire audience at all times. The set was built by Mike Skiles and Jim Skiles, and it looked every bit the middle-class home you’d expect from someone seven years into their law career. The barn space also makes it easy to look around at other patrons, and it was evident that everyone there on Thursday night was having a ball.

Even though this production's premise is based on lies, the truth is that Here Lies Jeremy Troy is a hoot and a half. I didn’t quite know what to expect going into this show, but I was pleasantly surprised to find an interesting premise and a cast boasting fantastic comedic timing. If you’re able to leave some of your sensibilities behind for a few hours, the Richmond Hill Players have got a great show for you. And that’s the truth, and nothing but the truth.